Coolidge’s friends and supporters knew he would like to be Governor. As he put it, ” a man would scarcely be willing to be Lieutenant Governor,” if he did not wish the higher office. As President of the Senate, a powerful office in Massachusetts, he had had much to do with the success of Governor Walsh’s legislative initiatives, quite Progressive at the time. In 1915, the party chose Samuel McCall for governor and Coolidge for the Lieutenant governor spot. McCall had been a Mugwump in the 1884 election, supporting Democrat Grover Cleveland and was considered a reformer. McCall had been forgiven by the party, mostly because he had not joined the Progressives in 1912, and he and Coolidge were elected in the primary which McCall had lost the previous year. The platform, largely due to Coolidge’s influence, was quite Progressive, including workman’s compensation, public education, including vocational education, pure food and drug laws, honest weights and measures and wage and hours reform. Coolidge polled better than McCall suggesting that some still had not forgiven the latter for his mugwump radicalism. 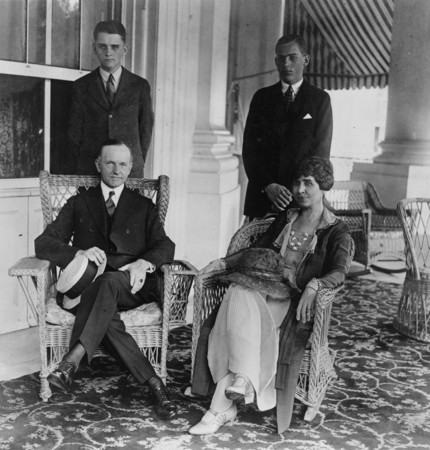 The family taken in 1924 before Calvin Jr.’s death.

In 1912, Coolidge first met one of his two mentors, Frank Stearns, a fellow Amherst alumnus and a wealthy department store owner. Their first meeting was not promising as Coolidge’s abrupt manner offended Stearns. Later, in 1915, he learned that the local issue he was trying to present to Coolidge had been enacted without his influence. Stearns thereafter was a major supporter of Coolidge along with Murray Crane, a former Massachusetts governor and Senator, who became his chief adviser. Crane died just at the time Coolidge was inaugurated President and the president bitterly regretted the loss of this friend and adviser. Crane and Stearns would have much to do with getting Coolidge the vice-presidential nomination as he was not the choice of the party bosses who chose Harding. 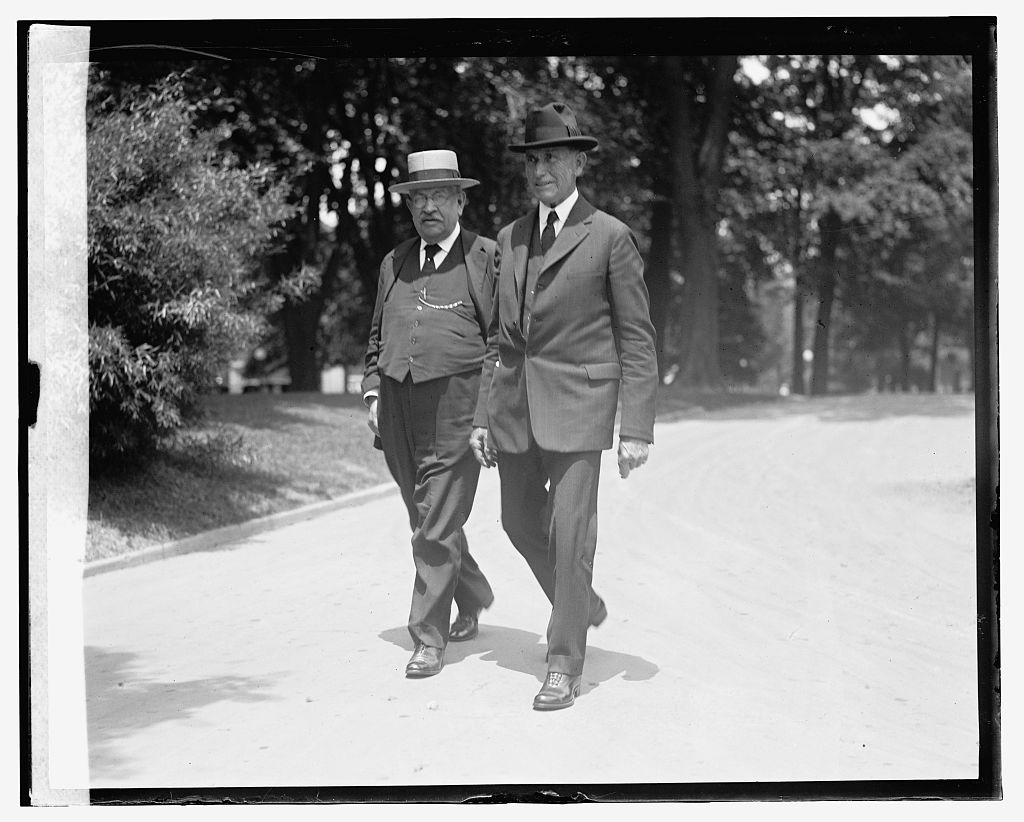 Coolidge and Governor McCall were re-elected in 1916 with increased margins and again in 1917. In the 1917 election, Coolidge came within 2500 votes of winning Boston, indicating his good relationships with Democrats and especially the Irish. McCall had told Coolidge that he really wished to be Senator, elected by the legislature until 1913 and the 17th Amendment, but would not mention this during the election. A few months after this election, McCall asked Coolidge to announce that he planned to run for Governor in 1918 and the Governor would run for the Senate. The incumbent Senator, Weeks, was a dull figure and out of touch. Coolidge announced but McCall, the incumbent Governor, withdrew from the Senate primary race because of the war and a lack of enthusiasm for his candidacy. This left Coolidge with the Republican nomination. His Democratic opponent was a shoe manufacturer named Long who had previously been a Republican. Their platform was moderately progressive and the race seemed comfortably in their hands. Weeks, however, was a weak candidate and the attempt of McCall to replace him divided the party somewhat. Long, his opponent, attacked him incessantly but, typically, Coolidge refused to return the attacks or even mention the name of his opponent. Coolidge was elected by a narrow, 17,000 vote, margin and Weeks lost to former Governor Walsh

Influenza epidemic had prevented the parties from holding state conventions or doing much campaigning. Patriotism had led much of the electorate to support the Wilson Administration. There was also the growing influence of immigrants in eastern Massachusetts, especially the Irish and Italians, who tended to vote Democratic. Coolidge got on well with Democrats and their support, as in this case, often made the difference for him. He was now Governor of Massachusetts, the height of any ambition, as he tells us in his autobiography.

He went to Maine to rest after the election and, a few days later, was awakened to learn of the Armistice. The Great War was over as he settled into his duties as Governor. Since there was no residence for the Governor, he stayed at the Adams House, a boarding house where he had stayed when in Boston as a member of the Legislature and as Lieutenant Governor. His wife remained at home with the boys. Eventually, they took a two room suite at Adams House and the family moved to Boston. President Wilson stopped in Boston on his way back from Europe and he and Coolidge began a friendship that lasted until Wilson’s death and continued with Mrs Wilson after.

A strike of Boston public railway workers began a series of labor upsets due to the inflation that had outpaced wages. Coolidge helped to negotiate between the parties and the matter was turned over to arbitration with a satisfactory outcome for both the workers and the railway companies which had limited options as their income was derived from fares. At this period, and really for much of his career, Coolidge was very close to the Progressives in his ideas about labor and what we would call the welfare state. He supported limits on working hours for women and children and even a minimum daily wage. Historians, enamored with Wilson and Roosevelt, have misrepresented his beliefs.

Upon his return from Vermont in August, he faced a growing problem with the policemen of Boston. When hired, they had signed an agreement that they would not join a union. In spite of this agreement, a local “Boston Social Club” had been formed. The union now proposed to join the AFL. Police strikes in London and Liverpool had resulted in better pay and hours. The move toward a true union was strongly opposed by Curtis, the police commissioner. The Boston Mayor, a Democrat, intervened and tried to convince Coolidge to press the commissioner for arbitration. Coolidge had appointed the commissioner and could remove him but he felt he could not intervene otherwise. Furthermore, he agreed with the commissioner that the principle was more important than arbitration could establish. Coolidge was convinced that the matter would probably result in denying him re-election but he refused to pressure the commissioner. At the same time, he was sympathetic to the policemen whose hours and working conditions needed improvement.

On Sunday, September 7, the matter came to a head. Ironically, on that day he was scheduled to speak at the state AFL Convention, which he did. The police union did not come up. When the union refused to back down, its officers were brought before the police commission, charged and removed from their positions. At that point, 75% of Boston policemen went on strike. It was Tuesday, September 9, 1919. The number of strikers was much larger than expected. The strike began at about 5 PM on the ninth. There were contingency plans with Metropolitan Police and State Police but the numbers were small and that night, about midnight, there was a rash of window smashing and theft from shops. Coolidge was outraged but he bided his time.

He had been considered pro-union as a politician thus far and he had had considerable experience with labor strife. A harsh letter from Samuel Gompers, who did not know Coolidge, did not help matters. A reporter about this time wrote: “The Governor is a Republican, but it is said that the Democrats would do anything for him, many of them as much as vote for him.” Coolidge arrived back in Boston on August 19 and issued a statement supporting Curtis. Peters, the Mayor and a Democrat, dithered, appointing a commission to study the problem. Coolidge kept his counsel as the crisis grew. He deferred to Curtis, a pattern he would repeat as President, delegating authority and allowing the man on the spot to go as far as he could to a solution before intervening. According to William Allen White, a Democratic party boss and union leader, Big Jim Timilty, who had served in the Massachusetts Senate with him, called on Coolidge to reassure him that the other unions were not going to support the police union with a general strike. “You see, Cal’s my kind of guy and he’s right about those damned cops,” he told a reporter years later.

Once the police actually struck, he was ready. First, Mayor Peters called out a volunteer militia. The violence was exaggerated but there was a lot of agitation about safety. Eventually, the city of Boston paid out $34,000 for damages. Three people were killed. By the third day, the strikers were having second thoughts. President Wilson had denounced them. The Mayor’s commission had recommended that the city recognize the union. That was unacceptable. Coolidge then acted. He called out the state Guard, took control of the police force and restored Curtis who had been dismissed by the Mayor.

The union now attempted to cut its losses. The Central Labor Union now voted against a general strike as Timilty had promised. The police union attempted to negotiate a return to work without penalty. It was not to be. Curtis issued an order that no man who had left his post on September 9 would be accepted back in the police force and they were not allowed to “loiter on the premises of the different station houses.” There were lots of returning veterans who were eager for jobs and the city had no difficulty replacing the strikers. There was talk of the possibility that the dismissal of the officers might cost Coolidge re-election. His response was, “It is not necessary for me to hold another office.” He knew his action was popular. In fact, it made him something of a national hero in this era of the Red Scare and nationwide labor unrest. Here is where Gompers sent his unwise telegram to Coolidge. He did not know that Coolidge was considered a friend of labor and that the unions did not support the police strike.

Coolidge pounced, publishing the telegram and his response in the newspapers. The last sentence of his response would take him to the presidency. “There is no right to strike against the public safety by anybody, anywhere, any time.” It is easy to see why Ronald Reagan was such a fan of Coolidge and had his portrait placed in the cabinet room. In the weeks and months following the strike, Coolidge received over 70,000 letters. In his autobiography, Coolidge wrote that he tried to help the strikers find other employment but they never worked again as Boston policemen. One of the strikers was William F. Regan whose son, Donald Regan, would someday be the Secretary of the Treasury and later Chief of Staff in the Reagan White House.

12 thoughts on “Coolidge as Governor”