As I previously mentioned, my favorite book from last year was the memoirs of Lord Wolseley. I am currently reading a decent biography of Wolseley, The Model Major General, A Biography of Field-Marshall Lord Wolseley by Joseph H. Lehmann (1964). Lehmann’s book fills in many interesting details, but it cannot possibly capture the verve and excitement and unrefined Victorian era honesty and cultural confidence of the memoir, which is in Wolseley’s own words. I remember picking up the Lehmann book years ago, it was marked as $6, but it was half off because it had sat on the shelf at Bookman’s Corner for over a year. It is amazing that a man as world-renowned, powerful and influential as Wolseley should have fallen into such absolute obscurity. In 1890 literally anyone in the world who could read a newspaper would have known who he was. Now it may be the case that not one person in a million has heard of him, i.e. that maybe fewer than 7,000 people in the world know who he was. Such is the fleetingness of fame and human greatness. 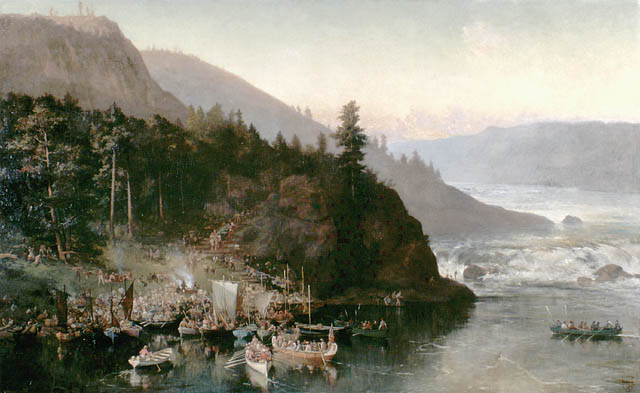 One of the most stirring parts of Wolseley’s altogether thrilling memoir is his account of the Red River Expedition of 1870.

Two snippets will give a flavor.

Here is Wolseley preparing for the plunge into the wilderness, constructing his own lake-and-river fleet to carry out the mission.

The total distance to be traversed between Port Arthur and Fort Garry was over 600 miles, and the range of hills that we had to cross, and which divided the waters which drained into Hudson Bay from those that reached the sea by the St. Lawrence river, was about 800 feet in height. Everything depended upon how the force to be employed was organized and equipped before starting. After we had once embarked in our boats on Shebandowan Lake, we should be cut off absolutely from all outside help and should have to trust entirely to our own exertions and pluck. On the way to Fort Garry we could not receive reinforcements, and, worse still, could obtain no provisions, clothing, ammunition, axes or other tools. Everything we required had therefore to be taken with us in our boats, and their carrying capacity was necessarily very limited. All implements for use during the expedition had to be both strong and light. At the numerous rocky and difficult portages to be traversed, our boats would be exposed to extremely rough usage, for which they would have to be well built of good tough material. But if made extra heavy for this purpose, their great weight would add seriously to the men’s labour in dragging them over the steep and rugged heights to be encountered between Lakes Superior and Winnipeg. Almost all these boats were about thirty feet long, with a proportionate beam; all had keels, and were about half and half, carvel and clinker built. The crew of each consisted of eight or nine soldiers and two” or three Indians or other civilians who were selected as being, “voyageurs,” or good men on timber rafts, or at river work generally. Each boat carried sixty days’ provisions for all on board of it, in the shape of salt pork, beans, preserved potatoes, flour, biscuit, salt, tea and sugar. No spirits of any sort were provided for the men, and the officers were forbidden to take any wine for their own use. It was a strictly teetotal undertaking. The necessary entrenching tools, ammunition, tents, waterproof sheets, cooking pots, blankets, etc., etc., left but little empty space in the boats, which were loaded down as far as they could be with due regard to safety. The captain of each company was responsible for all these stores, and to him were given some well-selected boat-builders’ tools, a number of tin plates, and plenty of white lead for patching up holes or injuries done to the boats. All such minutiae had to be well thought out and every calculable contingency provided for.

Here is a vignette of the journey:

The wind had died away, as it usually does there towards evening. The weather was delightful, the lake so lately stormy, was in its best and most placid beauty, reflecting on its mirror-like surface the beach and other trees on the high ground around it. For the moment all was still and quiet. The day’s work was over. Strange to say, no hum of insect or chirp of bird ever comes from these northern parts of the Canadian forests, and there were no swallows to skim over the lake below and lend life to its great expanse of water.

The whole scene, with its picturesque military accessories, was for many reasons very impressive. It brought to my mind the stories read in boyhood of how wild bands of fierce Norse freebooters set out from some secluded bay in quest of plunder and adventure.

One great peculiarity of our undertaking struck me forcibly at the time: that in an age, justly celebrated for its inventions and scientific progress, such a military expedition should start unaided in any fashion by either the steam engine or the electric telegraph. We were to depend exclusively upon sail and oar to reach our far-off destination, just as the Greeks and Romans had been forced to do in their foreign campaigns some twenty centuries before. Another curious fact was, that upon reaching our destination we should be as far from a telegraph station as Caesar was from Rome when he jumped ashore in Kent with his legions a little before the Christian era.

As it happens, Wolseley sent ahead of his expedition, transiting the United States in civilian garb, a certain Captain William Francis Butler. Butler became a close colleague and protege of Wolseley’s. As it happens, Butler was a Catholic, showing that Wolseley was no bigot, and knew talent when he saw it. (Lehmann mentioned that Butler was the wife of the justly famous Lady Butler, painter of many great military paintings, and a great favorite of mine.)

In Lehmann’s book, he mentions that Wolseley’s force met up with Butler, who successfully reached Wolseley’s fleet by canoe, an amazing feat in the wilderness. This caused me to look a little further into Butler, and found that he had written a memoir of his Canadian adventures, entitled The Great Lone Land, A Narrative of Travel and Adventure in the North-West of America (1872). This looks like a most excellent book, after a brief perusal on Google Books. I will put it on my Kindle, once I buy a new one, having most regrettably dropped and broken the one I had.

I liked very much this passage, where Butler praises the common soldiers of the Red River Expedition, using them as the opportunity to make a larger point, reminiscent of Kipling in his poem Tommy.

There has been some Hungarian poet, I think, who has found a theme for his genius in the glories of the private soldier. He had been a soldier himself, and he knew the wealth of the mine hidden in the unknown and unthought of Rank and File. It is a pity that the knowledge of that wealth should not be more widely circulated.

Who are the Rank and File? They are the poor wild birds whose country has cast them off, and who repay her by offering their lives for her glory; the men who take the shilling, who drink, who drill, who march to music, who fill the graveyards of Asia; the men who stand sentry at the gates of world-famous fortresses, who are old when their elder brothers are still young, who are bronzed and burned by fierce suns, who sail over seas packed in great masses, who watch at night over lonely magazines, who shout, “Who comes there?” through the darkness, who dig in trenches, who are blown to pieces in mines, who are torn by shot and shell, who have carried the flag of England into every land, who have made her name famous through the nations, who are the nation’s pride in her hour of peril and her plaything in her hour of prosperity—these are the rank and file. We are a curious nation; until lately we bought our rank, as we buy our mutton, in a market; and we found officers and gentlemen where other nations would have found thieves and swindlers. Until lately we flogged our files with a cat-o’-nine-tails, and found heroes by treating men like dogs.

When Butler speaks of “… the poor wild birds whose country has cast them off…” one of course thinks of the Wild Geese of Ireland, though here he refers to all the “soldiers of the Queen” — Irish and English and Welsh and Scots — who took the shilling and served for England rather than against her.

The treasure trove of high quality Victoriana is seemingly inexhaustible.

Furthermore, I grow increasingly convinced that the military world of the future will resemble in many ways the world of the Victorian era far more than the 20th great power conflicts we thought were “normal” war. One example may suffice. Lehmann mentions the British conquest of Burma, and the outbreak of small scale but widespread violence which followed it. During one of these affrays then-lieutenant Wolseley first distinguished himself, and nearly died as a result.

Early in 1853, not long after Wolseley’s arrival in Rangoon, the Second Burma War, which many observers had regarded as history, came noisily back to life, for in wars of conquest and annexation two separate stages often developed. First, the regular forces of defence were overwhelmed and much of the land was occupied. In the second stage, guerilla fighting became common.

Or to select an example from the American experience, it is a lot like the occupation of the Phillipines after 1898.

It was once common knowledge that these sorts of wars had two phases and you needed to be prepared for both.

(The painting is “The Red River Expedition at Kakabeka Falls, Ontario” (1877) by Frances Anne Hopkins).