So, my daughter and I have been terribly amused by Governor Rick Perry announcing that he’s going to run, since we’ve actually  met him face to face. It was a little over two years ago at a Tea Party event in San Antonio, and I will confirm that in person he is quite brashly charming. And I even have pictorial evidence, since there was a photog from the San Antonio Express news who commemorated the event. 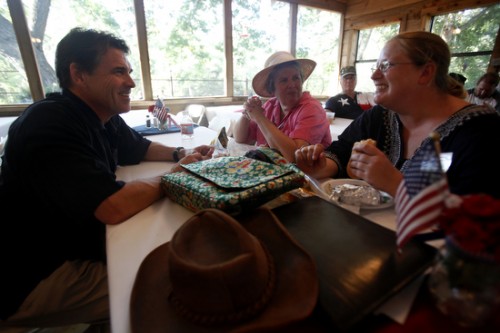 I blogged it thusly a day or so later, in writing up the 4th of July event at the Rio Cibolo Ranch:

“…the biggest element in the program was Governor Perry signing off on our “Contract with the Constitution” – a statement of principles, which we would like to present to every elected politician or prospective politician. If they sign off on it – good and well; if not … well, then, that says something. And if they sign off on it, and then don’t keep to it … that says something else. Up until the last minutes, we were under the impression that he would just zoom right in, introduce Marcus Luttrell, sign off on the Contract and zoom out again. He actually stayed for about three hours, some of it in rustic little banquet hall where the VIP dinner was being held, and the rest in the backstage area. When the VIP dinner was over and a lot of the guests were scattering to their seats in front of the stage, Blondie and I went and bought plates of chopped brisket on a bun from the food vendor, and brought them in to eat in the relative coolness of the hall. We sat next to the elderly lady known to us all as Matt’s Mom; Matt is the webmaster for the Tea Party Committee. His Mom comes to all the meetings and events with him. On Matt’s Mom’s other side was Other Matt, the husband of another Committee member who was wearing his 82nd Airborne baseball cap. After a bit, Governor Perry came over, and pulled up a chair opposite and began ragging on Other Matt, the old paratrooper for jumping out of perfectly good airplanes; the Governor had been an Air Force transport pilot, it transpired. So we had quite a frivolous and merry conversation, with Blondie ragging back at him, when he confessed that he had broken a collarbone lately in a bike accident – but not a motorcycle, a mountain bike, and I recommended that he give up on the VIP chicken dinner, and try some of the brisket from the vendor outside. Not quite sure why he glommed on to us, out of the people left in the hall – possibly because we didn’t want to talk politics or ask for a picture.”

I think, out of all the major-league politicians in 2009-2010 — and surely a governor has to count as major-league — he was one of the very first to sense that the Tea Party was genuinely a real movement of real people, with passion behind them, and the determination to go the long, hard road, and had the assurance to act on it. I think he knew, quite early on, that it was something he had better get out in front of. He’s a professional politician, for god’s sake, with (apparently) excellent social instincts. He was really working the crowd at the 4th of July Tea Party, and seemed to be loving every single second of it. Much later, I told a male acquaintance who knows him (Texas is the worlds’ biggest small town; everyone is connected by about two degrees of separation) about this encounter. I said that my daughter and I both had the feeling that if the venue had — by some miracle — been the NCO club on a Saturday night, that we had been hit on by a flirtatious and amusing man. The male friend chuckled, and said, “Yeah, but he was hitting on you, politically!” In any case it has worked for Blondie – she’s very much pro- Perry at this juncture.

The local nick-name for him is “Governor Good-Hair.” He does tend to go wherever the prevailing winds would take him — but at least he is paying attention to those winds, unlike some other professional pols that I could name.

5 thoughts on “Meeting With da Governor”