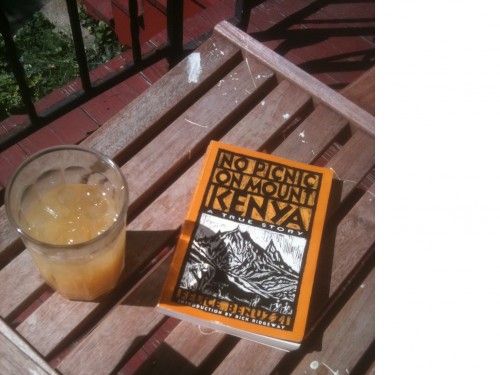 by Felice Benuzzi. (Dirt cheap copies at the link.) This is a very good book. It is set in 1943. Benuzzi is an Italian POW in a British prison camp in Kenya, way the Hell out at the butt end of nowhere. He is bored to the edge of psychosis by prison life. In his pre-POW life he had been a mountain climber in the Alps. Off in the distance, he can see the glacier-girt pinnacle of Mount Kenya. Benuzzi falls in love with the mountain. He is overcome with a desire to conquer it, to possess it, to make it his own. He enlists two fellow POWs to assault the mountain. They makes a bunch of mountaineering equipment under the very noses of the askari guards. The three men escape, climb the mountain — or at least one of its peaks — and return to the prison camp. Of course they are punished for this escapade. But, to their credit, the British take a sporting attitude toward it all, and even send a team up to confirm the prisoners’ claim. I am leaving out a lot of important and engrossing details, of course. Benuzzi’s descriptions of the ascent and its hardships, the cold and hunger, the flora and fauna, and POW life, are all very well done. You have to love these Italians. The war was a distraction, an absurdity they were stuck with. They had no interest in it. The flag they plant on the mountain is the monarchy’s flag, not the fascist flag. They are Italian patriots who despise their own stupid, fascist government and the stupid, losing war it had gotten them mixed up in. A very sane attitude, actually.

(I got this book at Powells the previous weekend. I took the kids down there and said, OK, everybody gets ONE reasonably priced book. And this is the one I found that was reasonably priced. I am glad I subjected myself to the same discipline I imposed on them. In this case, it worked out well.)

(I note also that one of my heroes Halford J. Mackinder, in addition to inventing the idea of the Geographical Pivot of History, was also the first guy to make it to the top of Mt. Kenya, in 1899. A most excellent example of Victorian heroics, a fit companion to the mountaineering exploits of Sir Francis Younghusband. Mackinder’s own book on the subject, The First Ascent of Mount Kenya has now come to my attention. I will make it my own, possess it, conquer it.)

11 thoughts on “Felice Benuzzi, No Picnic on Mount Kenya”