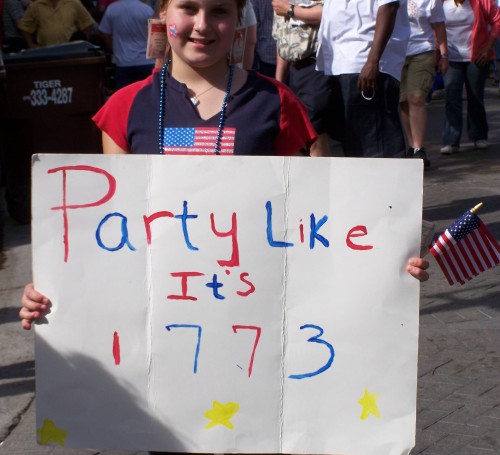 It has been terribly amusing for me to observe the genesis and development of the Occupy-Insert-Location-Here movement over the last couple of weeks, especially as it has been trumpeted as the liberal answer to the Tea Party. First on Open Salon a good few of the resident bloggers were sniffling over how this Terribly Important Movement was being callously ignored by the main-stream establishment media. As of last week, thought, conventional media can’t seem to keep their eyeballs or their cameras off them – especially the Occupy Wall Street faction. Cynicism leads me to suspect that this is because it is convenient to establishment organs such as the New York Times, who all but gave faux-movements like the Coffee Party essential life-support, but that’s just me.

So, is this the Tea Party of the left? Based on my experiences during the early weeks and months of the San Antonio Tea Party throughout 2009, I would say not – but with some caveats. There are a few similar aspects, notably detestation of business crony capitalism as it is currently practiced, suspicion of the works and ways of the Federal Reserve, and a similar deep distrust of establishment politicians. There was and is also a strongly libertarian streak, to judge by the presence of Ron Paul fans, or  Ronulans, as we used to call them during the 2008 election season, when they were as noisy and ubiquitous as a sort of internet grackle.

The most notable likeness is the protesting thing: the earliest organizers organized via Facebook and held at least one protest on Alamo Plaza – the main motivation being the Obama-generated fiscal deficit, and the then-proposed economic stimulus. Interest snowballed at a local and grassroots level all during March, 2009, following upon Rick Santelli’s Tea Party rant. What with one thing and another, we held very public large public protest rally on April 15th in Alamo Plaza. There were some after-event quibbles about whether there had been 15,000 people or over 20,000 – but it was a lot, and all but a handful had ever been to a protest before. And – it was fun! Really, it was like the world’s largest block party, which may be the elemental reason to hold a protest in the first place. They’re fun. They grab eyeballs, especially if there is a huge turn-out. People came from across the United States, they brought their kids, their dogs – and they came to have a good time.

I suspect that’s what motivates a lot of volunteer participation in the Occupy Whatever protests; newbies discovering this for the first time, old protest hands relieving their glory days  . . .  or spoiled young trustifarians making a grab at relevance. Our protest rally was also a lot of work to organize beforehand, down to getting permits from the City, arranging for porta-potties and security, working out the program of speakers, holding a press conference, sound system – all that stuff. We’d made a splash, media-wise, and gotten a heck of a lot of people together in the service of a common interest  . . . But it was just a single day. The government machinery doesn’t stop on a dime and turn around, just because of a protest, no matter how large or well-publicized. The SA Tea Party, and others that I knew about continued on – not so much with protests, but a sustained effort to recruit voters, to become involved politically at the local level and to support candidates running for office who espoused the principles of fiscal responsibility, Constitutionality and free (really free, not the crony-capitalist kind which only pretends) markets. It took months of effort, and I believe will take months and years more, past the election season of 2012.

As far as I can see and to date, in observing the Occupy Whatever from a careful distance, it appears that the rally/gathering/extended squalid camp-out has become an end in itself. Sure, there appears to be some kind of organizing principle, even if it is merely the finest all-plastic and a yard wide Astroturf. Some of the participants seem to be working up a list of demands after the fact, but I can’t see any evidence of follow-through to the protests. Not much organizational outreach, no continuing education, no outreach to those who might be sympathetic; I suspect that many of the protest participants are old career protest hands, ready to turn out at any time to protest whatever the cause du jour might be. Occupy Whatever is successful in getting media coverage, but I’m not really seeing that as a long-term public relations advantage. The images which have been revealed to us over the last week: a protester defecating on a police car, a truly squalid, garbage-strewn campsite in a neighborhood park, a lot of creepy/incoherent/clueless protesters, mobbing the National Air and Space Museum  . . .  these are not images calculated to draw political adherents and effective sympathy from the larger community of Americans who might otherwise been inclined to involve themselves politically.

11 thoughts on “Tea Party – Occupy Whatever”