(This is an update to my previous post on this topic.)

Walter Russell Mead had a typically incisive post about the Occupy movement.

These comments are cruel but accurate:

Occupy Wall Street [looks like] the usual suspects, the kind of people who have been demonstrating for various causes for the last fifty years. Change the signs and to many people these demonstrations could be anti-Iraq war and anti-Bush demonstrations, or any of the other leftie causes going back many years.

From a news point of view this is dog bites man: the usual people are doing the usual things. They are doing it in an unusual place — and over time they may be doing it in unusual numbers. But leftie protests that go nowhere are part of the background noise of modern American life. Drums and granola in the park is not news. Until OWS breaks that mold, expect public interest to remain tepid.

I disagree in part with Mr. Mead. The Occupy Movement appears to be composed of two main groups. First, there is a very amorphous group of young people, to me they are kids, who are smart and well intentioned but very poorly educated. Second there is a smaller but more vocal group of the same old Lefty protesters. I had a post up about my visit to the Occupy Chicago General Assembly a few nights ago. Odds are the Boomers will take over and ruin this movement as they have done with so many other things. But, maybe not. The degree of diversity, really confusion, which is evident in this movement is shown by the posts and comments on their website. Television and newspaper coverage does not accurately capture the flavor of the thing. You need to walk over and talk to the people, especially the twenty-somethings. I am pessimistic, but I hope something good eventually emerges from this effort.

(I just noticed the comment did not show up, for some reason.)

If nothing else, “We Are the 99 Percent” is a reminder that the suffering is real.

This misery will inevitably give rise to a political response, as it should. The response of most people on the right of the spectrum has been derision directed at the lack of articulateness of the public protesters, and mockery at “losers” who apparently cannot take care of themselves. Also, the whole Lefty ambience and style of the thing is off-putting. But if the analysis stops there, then most of the story is lost. Most of the people who are suffering in the current economy are not “losers” but people how tried to play the game honestly and did not succeed. If all of that suffering is captured by the political Left and turned into political activity, then there will be a further round of bad and destructive policy choices. If the needs of these many people are not addressed by the GOP, then their votes will be forfeited in the next election, among other bad consequences. That would be very bad indeed. However, this movement, so far, does not appear to be getting a ton of traction from the mass of suffering people in the USA.

I walked over to the Occupy folks in front of the Federal Reserve Bank last night around 11 p.m. to see how many people were there and what was up. It was a very nice night for a walk. There won’t be many more like it before the hard cold sets in. There were maybe 50 people out. I talked to a few of them and gave away a couple of my precious dwindling supply of Lexington Green business cards. There was a cluster of younger kids and one older guy. I asked them if they would be open to having discussions with people from the Tea Party, since I think there is some common ground between the Tea Party principles and Occupy’s current grievance list — not a lot, but some. They seemed to be fine with that idea. Maybe I will try to do something along those lines.

This article had a nice diagram that captures the common ground: 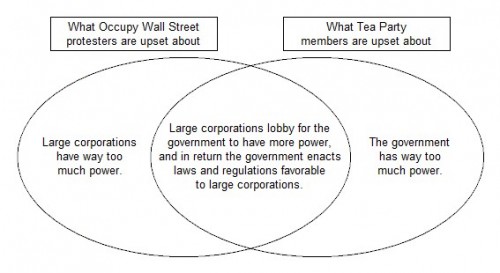 That captures my own long-standing view of the problem pretty well.

UPDATE: Looking some more at the WE ARE THE 99 PERCENT site is painful. This is a tiny fraction of the misery out there. A true New Deal style works project would have been a much better use of Obama’s roughly Trillion Dollar Stimulus. But my question is, what could be done to quickly get job creation going, other than a massive expenditure on make-work government employment? The political consequences of a lot more misery afflicting a lot more people could be very, very serious, and very, very bad — to say nothing of alleviating that suffering if possible.

UPDATE II: This post attributes the non-violence of the Occupy movement to conflict resolution techniques used in public schools over the last twenty years. This seems plausible, based on my observation.

UPDATE III: Thanks to Joseph Fouche for his excellent post in response.

51 thoughts on “Some Further Thoughts on the Occupy Movement”