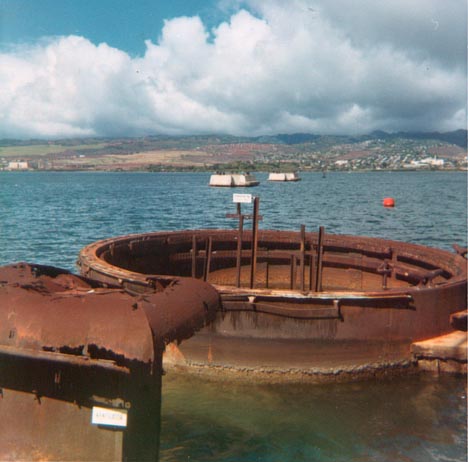 (The remains of the gun turret of the Arizona, taken from the memorial by me, in 1971)

Note: This is not of my own writing, but something I clipped from the L.A. Times around 1971 or 1972, and tucked into my paperback copy of Walter Lord’s “Day Of Infamy”. It was written by Jack Smith, who was then and for many years, one of the columnists at the L.A. Times. I thought at the time, and still do, that it was one of the most evocative short pieces ever written about that day—Sgt Mom

It was 30 years ago, as I write this at last; a Sunday morning. It doesn’t matter any more, but I’ve always wanted to write it down anyway, while it was still vivid, and before to many anniversaries had passed.
At approximately 8 o’clock on that morning we were standing in the front yard of Bill Tyree’s rented house, out in a valley back of Diamond Head. It had been an all-night party and Tyree was standing in the front door in his pongee Chinese housecoat with the dragon on it, waving us goodbye.
In those days there was nothing necessarily dissolute about an all-night party, especially on Saturday nights. We were night people, and there was always an excuse for a party, always some correspondent on his way out to Manila or Jakarta to cover the war we knew was going to break out in the Far East. The honoree this weekend was a United Press man from New York who was leaving on Monday for the Dutch East Indies.

It had been a good party. We were all keyed up and full of war talk and we envied the correspondent, who would be there when it started. That very morning the banner on the Honolulu Advertiser had said WAR EXPECTED OVER WEEKEND. Japan was expected to attack the Dutch Indies, or if they were insane enough, the Philippines.

We stood in the yard, all quite sober; but drunk perhaps, with a subconscious excitement and a benign fatigue. It was a bright morning. The pink was fading from the sky. There is no exaggerating the beauty of Hawaiian mornings. Sometimes, after these parties, we would drive out to the lagoon at dawn and watch the Pan American clipper come splashing in from San Francisco or Samoa; a flamingo landing in a pink pool.
I don’t know how long we had been standing there in the yard when we heard a thump; one of those deep, distant, inexplicable sounds that make human beings feel suddenly very small and cold.
“It must be the gas works” somebody said, and we laughed. Days later, when we were all together again, we agreed it must have been the Arizona blowing up.

We piled into the major’s car. The major was a press relations officer for the U.S. Army in Hawaii and he knew everything. He and the correspondent got into the front seat, my wife and I in the back. As we drove along Kapiolani toward Waikiki I looked up idly into the sky and saw a silver plane flying high along the shoreline with puffs of dark smoke bursting just beneath it, I was wondering what this phenomenon might signify, when a second plane flew over, provoking more puffs, and then another.
“Something funny’s going on up there,” I said. The major stopped the car and we all got out and stood in the street, looking up into that lovely sky. Another plane came in over Diamond Head and the puffs appeared, futile and somehow comical, like bad stage effects.

The major put his hands on his hips and swore;
“Damn it, I’ve told them not to pull this kind of stuff without telling me.”
We got back in the car and drove into downtown Honolulu, past the quaint old Iolani Palace, the only royal palace in America. The palace air raid siren was going full out. We were no longer frivolous. Things were out of joint but how, we could not guess. The major dropped us off at our apartment.
“I’m going to the fort,” he said, “and see what this is all about.”
In the apartment I started to undress and went out on the balcony in my underwear. A plane flew over. I had no idea what it was; but what the hell, we were making new planes every day. I heard gunfire, but gunfire was not unusual on Oahu in 1941.

I went inside and lay down. “Something funny is going on, “I said, “but I’m too tired to think about it. I’m going to bed.”
There was the sound of someone running up the stairs to the balcony, pounding at the door and shouting; “The Japs are bombing us!”
“I know,” I said, knowing it as if I had never not known it, “You’d better put some coffee on, “ I told my wife. “It might be a long day.”

(And that’s the entire column – one man’s reaction, recollected in tranquility thirty years later, transcribed by me, another thirty years after that – how the world you know ends and another begins, all on a Sunday morning. I don’t know if this column was ever reprinted, or put into a book or anything – but I thought it was one of the best recollections of that day that I knew of.)

3 thoughts on “Another Sunday, Another War”