So, on the whole, speaking as a freelance scribbler of work for pay, and an unabashed perpetrator of well-researched and at least competently written historical fiction, 2011 has not turned out too badly at all.

I managed to bring out an all-in-one hardbound omnibus edition of the Trilogy, and a second edition of To Truckee’s Trail – my very first historical fiction, through the Tiny Publishing Bidness … and the two-part prequel (Daughter of Texas and Deep in the Heart) to the Trilogy as well. Now, thanks to Chicagoboyz, I am exploring the means of getting a German-language translation of the Trilogy out there in the coming year … and meanwhile I have a commission to co-write a non-fiction book about a certain aspect of the Old West. This project tracks very well with my interests. As well, this paid project banishes the wolf from the door; removing it at least to the very bottom of the driveway, if not the length of the block.

I had very promising days at two local Christmas markets: the Weinachtsmarkt in New Braunfels, and Christmas on the square in Goliad, and am waiting for a bump-up in sales on Amazon.com for both the print and the digital editions. I have also made the Complete Trilogy, Daughter of Texas and Deep in the Heart available for Amazon’s KDP Select for the next three months – it’s a lending library for Kindle owners who also sign up for Amazon Prime membership.

In January, I hope to be able to republish the individual volumes of the Trilogy in paperback through the Tiny Publishing Bidness, which will allow them to be priced more competitively – at about two dollars less. Towards late summer, I hope to be able to get cracking on the next book of my own; a Gold Rush picaresque adventure, involving a herd of cattle driven to California from Texas in the early 1850’s. I’ve always wanted to write that kind of a story; this will be young Fredi Steinmetz’s venture into the California gold mines – this is alluded to, several times in passing in the Trilogy. I can’t really say much more about what will happen, but there will be bandits, vigilantes, gold mines, an eccentric Fenian and a runaway girl dressed as a boy … and as always, cows. Lots of cows.

And finally – because it’s Christmas – what is cuter than a small dog dressed as Mrs. Santa? 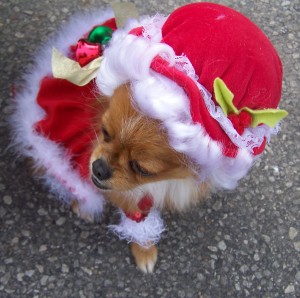 (Crossposted at my book-blog)