I was having a drink one night reading an article about someone’s “favorite things” and they mentioned an out-of-print book from the ’70s about the firm Hipgnosis that designed iconic album covers. Literally 5 or so clicks later I ordered it from my iPhone through Amazon and it recently arrived (amazing what the Internet can do). 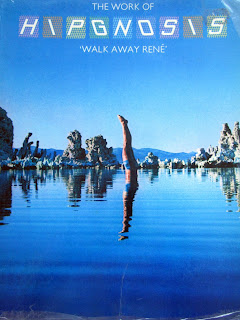 Hipgnosis was the name of the now-defunct firm that produced all the record covers that you have in your collection from the era when a record cover was a work of art, something to look at for hours on end while the music played over your stereo (or headphones). Wikipedia has a good summary of the firm here and also the main designer (Storm Thogerson) here who even today still creates great CD Covers (it doesn’t sound the same, I admit) for bands like Muse. Here is a great site (non official) of Hipgnosis material, as well. 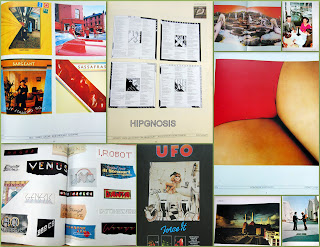 I was very impressed with these record covers growing up. At that time the internet didn’t exist so unless you went to a show and saw the band “in the flesh” or read a music magazine (which I never paid for) at a magazine stand you didn’t know much about the band “behind the music” so these iconic images helped you to imagine what the band stood for. Plus Led Zeppelin and Pink Floyd and similar artists never really toured the states when I was at an age to afford to attend shows so their “message” came through on album covers, posters, and sleeves.

Some of the album art that Hipgnosis made from the ’70s era is from great bands and albums like “The Lamb Lies Down On Broadway”, the Pink Floyd classics, and the Led Zeppelin era, as well as the Peter Gabriel unnamed solo albums. These bands seemed to stand well with the images.

I am a huge Michael Schenker / UFO fan and loved their covers, too, except I didn’t really understand them (especially “Force It” with the gleaming bathroom appliances). Obsession with the “ball bearing” images didn’t make the book but it also was iconic.

Then you get the more obscure bands like Montrose (Sammy Hagar’s band before he went solo) with their “arty” covers. Some of the band covers are hilarious when juxtaposition-ed against the fact that much of the underlying music was awful. Obviously these images were damn racy in the day; when I bought the book there were photocopies from a xerox machine inside the book of some of the racier album covers involving human body parts. These photocopies were likely 15 years old (nowadays way racier stuff is everywhere in the internet).

I also like the logos (in the collage) and the inside sleeve from “The Lamb Lies Down on Broadway”. Hipgnosis really did outstanding work and I highly recommend the book if you can find it. The book is organized in a somewhat “cheeky” fashion (they are British, after all) with the famous “Flying Pig” over the power station for “Animals” filed under the category “Fiascos”.

2 thoughts on “The Art Of Hipgnosis”