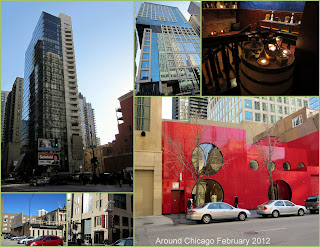 Upper left – the hotel Dana. There is a cool Asian restaurant in the hotel – the billboard has a girl with 2 different colored eyes. On the roof of that hotel there is a club that is open all winter. Note – from behind – that building looks like a Soviet creation it is all faceless wall with one window. Upper middle – a cool new building on the Northwestern medical campus in Streeterville. Upper right – a little candle lit setup in the restaurant Zocalo in River North. Lower left – some random construction in River North. They are just adding a level on top of a building like it is a third world country or something. Lower middle – Chick Fil A is in Chicago near the Magnificent Mile – that place is awesome! Lower right – a cool red building in River North.

4 thoughts on “Around Chicago February 2012”