Here is a photo that all Palestinians and their supporters should see and remember, 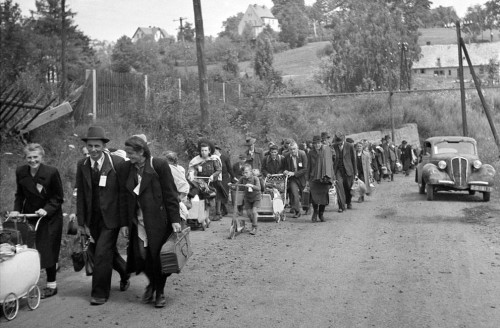 The caption is worthwhile, too.

Sudeten Germans make their way to the railway station in Liberec, in former Czechoslovakia, to be transferred to Germany in this July, 1946 photo. After the end of the war, millions of German nationals and ethnic Germans were forcibly expelled from both territory Germany had annexed, and formerly German lands that were transferred to Poland and the Soviet Union. The estimated numbers of Germans involved ranges from 12 to 14 million, with a further estimate of between 500,000 and 2 million dying during the expulsion.

It is a mystery to me (not really) why the Palestinians and their supporters do not make the connection between the Arabs who left Israel in 1948 and the Germans who were forced out at the end of the war. How many terrorist Sudetan Germans have you heard of ?

12 thoughts on “The Palestinians should see this”