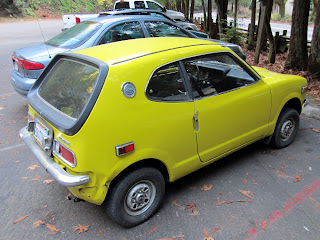 Austerity measures introduced by Prime Minister Mario Monti’s government have pushed Italian gas prices to the highest in Europe, an average of 1.82 euros per liter, or $9.17 per gallon, with taxes accounting for about 54 percent of the total,

The article goes on to talk about how this price increase impacts ordinary Italians just attempting to get around and go to their job.

The Italians hit hardest by higher gas taxes are those like teacher Cioni — working people who live in areas poorly served by public transportation.

Even in the US, where taxes on gasoline are high but do not comprise 54% of the total cost like they do in Italy, driving now requires actual trade-offs as you near $5 / gallon gas.

In the suburbs of Chicago you typically drive long distances during the normal course of the day. For instance it is over 30 miles from the Chicago loop downtown to Naperville each way. Since you probably will be driving around a bit when you get there, it is reasonable to think that you might burn 3-4 gallons of gas depending on traffic and mileage, along with $5 in tolls (depending on the route you take). If you figure that gas is $5 / gallon, then that round trip just cost TWENTY DOLLARS. Note that this analysis doesn’t consider the wear and tear on your car… this is just the incremental cost of the journey.

I remember growing up that $20 was a lot of money. You could live for a few days with $20 in your pocket (just the occasional fast-food meal, some gas, etc…). Now you spend $20 EVERY TIME YOU GET IN THE CAR.

This type of taxation does severely punish the “working” poor. It doesn’t punish the poor who aren’t working nearly as much, because they can take the laborious time to use whatever public transportation is available. The working poor, on the other hand, are essentially “on the clock” and if you are near or a bit above minimum wage you are probably taking home maybe $10 / hr after taxes. Thus the trip from Naperville (or a nearby suburb) to and from Chicago just took up TWO HOURS of your working time.

A family member who lives in Naperville talked about a neighbor who works at a popular (casual) restaurant in the city as a waitress and I started doing the math in my head… the money would have to be significantly better than from a local restaurant just to make up for the difference in gas prices and tolls alone.

I expect that over time gas prices at this level will significantly impact car-buying behavior.  When I purchased an Altima in 2010 (which I subsequently sold to a family member because it was too big for my parking garage and accumulated wear and tear) I bought a 4 cylinder engine, which made me seem like a minority on the highway because everyone else seemed to have a 6 cylinder.  However, the 4 cylinder engine (which is fine for a cruising car like the Altima, it isn’t a sports car after all) gets better gas mileage which will pay off very quickly with gas at $5 / gallon.

I expect that kids learning to drive will begin to associate driving with a very high marginal cost – i.e. each time you get in the car, money is flying out of your pocket.  When I started driving insurance costs were the big barrier, followed by the price of the car and then gasoline.  Thus once you bought and insured the car, you might as well drive it. Behavior that lasts a lifetime often begins when you are first starting out, so those that are starting driving today might view it as an occasional luxury or something to do as a necessity rather than as an activity in the normal course of life.

For the working poor, high gas prices tied to high taxes (especially in Europe) make their lives much more difficult because it cuts right against their take-home pay and often they need to drive to reach their jobs.  Since the poorer individuals often live far from where the jobs are located in the service sector (i.e. downtown Chicago is where a lot of night life is but the cheaper housing is often in the far-flung suburbs) this will limit their opportunities to local employers which could cut their opportunities significantly.

For younger people starting out, the incremental cost of a trip will make driving a much more “thoughtful” experience and trips will often be combined or deferred altogether.  Since habits you develop as a teenager often stay with you for many years or even a lifetime this could cause a seismic shift in behavior, away from driving.  Whether that is good or bad depends on your position; it certainly hurts the vitality of the economy because for most parts of America public transportation is not convenient, reasonably priced, or even available.