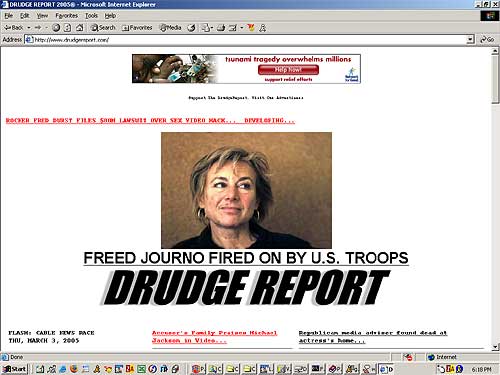 I expect this kind of thing from Reuters, the NYT, sometimes the AP. But Drudge? The headline seems to suggest that U.S. troops tried to murder a released journalist-hostage in Iraq. The cited AP story has a more accurate headline: “U.S. Fires on Car Carrying Freed Hostage”. Even better would have been the full story: After week of car bombings, U.S. troops mistakenly fire on unidentified vehicle carrying freed hostage as it approaches checkpoint at night. Not as much drama in that one, just the truth.

Drudge is usually pretty good about avoiding MSM-style tendentiousness, but in this case I think he overdid the evenhanded spin. If he has a systematic flaw it’s his tendency, after a string of stories that favor one side in a controversy, to emphasize stories that favor the other side. Sometimes he sensationalizes events out of all proportion to their significance.

UPDATE: I agree with the commenters who suggest that we do not yet know enough about this incident to assume that it was inappropriate for U.S. troops to shoot at the car. It may be that they did exactly the right thing under the circumstances. Obviously there will be an investigation, and just as obviously some media people (I don’t mean Drudge) are going to try to use this unfortunate event as a weapon against the U.S. regardless of what actually happened.