When I started out with computers it was all Apple. We had Apple II machines and I remember the “green screens” (and then an “ochre” screen). It was quite exciting to have 2 disk drives, back in the day when you stored your programs on disk rather than on a hard drive in the machine. My father had a background in computing from the earliest days and was happy to invest in computers when hardly anyone else I knew had one and this helped me to get exposure which has been a big help in my career. The most exciting games were Choplifter which was great with the joystick (thanks to Wikipedia for helping me with all these memories), Castle Wolfenstein which startled me when the guards shouted at you, and of course the epic Wizardry game for which I have the cover sheet of the rules manual right here. 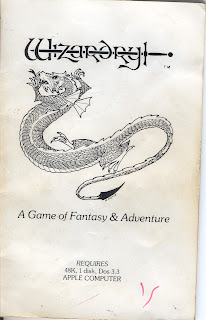 In college I had an IBM PC XT. This machine was also state of the art for the day and its casing was some sort of nearly industrial metal that you could run over with a truck. By then we had started to move on to 3.5″ disks which seemed very futuristic when compared to a 5.2″ floppy. I remember actually moving this computer around which was not simple because it was the opposite of portable.

At work we had “luggable” machines which were compacs. I am not sure which version we had it may have looked like this I do remember that it was 1) very heavy 2) if I lost it I’d probably be fired 3) it had an eerie screen color that was described as amber.

Over the years I ended up in the Windows world because this was the tool for business and in various jobs you had to program on and work with Windows laptops and desktops.  Given that, it made sense to just stay in the Windows world for my home PC’s of which I’ve had many but are quite boring so I will spare you that update.

Recently I decided to get rid of my Windows laptop.  Like Dan, I buy cheap Windows laptops and run them into the ground.  Mine was less than $500 and still worked fine.  However, I was out waiting for someone with my laptop in my backpack and as I struggled to take out the massive, bulky thing with a 17″ display I realized that I might as well pull out a rotary phone and a VCR, too.
Then I took out my friend Brian who has forgotten more about recent PC’s than I know and we started looking.  By the time I bought a windows laptop with a 13″ or so screen (I want to be able to carry it around) from a decent manufacturer and loaded it up it was going to be closer to $1000.  Finally I started to think the unthinkable… maybe it was time to go back to Mac’s. 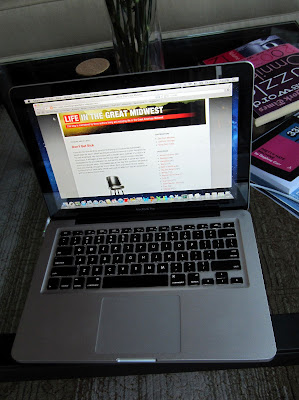 I am lucky because there is a MacMall physical retail store near my house.  I am too stubborn for the glitz of the Apple Store.  I headed over there and they had a sale on a discontinued brand of 13″ MacBooks.  I wanted a bit more heft on my machine so I took one with the ports and a CD drive rather than the fragile looking Air line.  It was about $1300 out the door with a bag but…

Mac is good from a work perspective.  I bought Office and of course Safari works fine as a web browser. If I was a programmer (I’m not anymore) they have myriad tools and of course you could boot it up in UNIX or Windows if that was necessary.

Beyond the initial Mac I trundled back to the store and bought a Time Capsule wi-fi router and a new (crappy) printer which I plugged into the router to share in my condominium.  Time Capsule also functions as a shared drive so I can back up my photos and music from my windows machine (which is all I care about on that machine, anyways) and then pull them down on the Mac like I did in this post.  Someday I may convert over to the Mac for photo editing as my primary but I am a ways away from that.

The biggest difference for the Mac is the fact that as soon as you turn it on, it works.  This means that I can work in the morning (early) and get some things done right away and then just close the lid and head out the door.  It is hard to explain how big the impact of something this simple is – it is difficult to go back to the Windows machines once you’ve done that (I typically turn my Windows machine on and walk away and come back later after everything has booted up).  Also of course the MacBook is well made and everything works although I am still getting the hang of the little nuances and differences that make it different than a Windows machine.

So all in all I guess I am another convert from the windows world.  The iPad rules the rest of my household and she doesn’t care if her Windows XP machine is fast or not because it works for the basic outlook / tax duties that it has and everything else from web browsing to reading books and even watching movies (on HBO GO) and email (mostly) goes on that iPad.

35 thoughts on “Me and My MacBook”