The Muslim Brotherhood candidate has now been declared the winner of the Egyptian election. Some foolish things are being said, as a consequence.

Morsi’s election is tempered by the army’s recent move to significantly limit the powers of the presidency regarding the national budget, military oversight and declaring war. Following a court ruling this month to dissolve the Islamist-controlled parliament, the military also seized legislative powers and is angling to cement its legal authority over the nation by guiding the drafting of a new constitution.

The military will not be able to control the destiny of the country. The army in Turkey was much stronger with a 60 year history of secularism and a recognized right to displace governments that violated Ataturk’s intent. Since the election of Erdogan, the army has been neutered and half the senior officers are in prison, either with no charges or trumped up charges.

Barry Rubin has a pessimistic view of the future for Egypt.

First, what does it tell about the West? The answer is that there are things that can be learned and understood, leading to some predictive power, but unfortunately the current hegemonic elite and its worldview refuse to learn.

What could be more revealing of that fact than the words off Jacqueline Stevens in the New York Times: “Chimps randomly throwing darts at the possible outcomes would have done almost as well as the experts”? Well, it depends on which experts. Martin Kramer, one of those who was right all along about Egypt, has a choice selection of quotes from a certain kind of Middle East expert who was dead wrong. A near-infinite number of such quotes can be gathered from the pages of America’s most august newspapers.

These people all share the current left-wing ideology; the refusal to understand the menace of revolutionary Islamism; the general belief that President Barack Obama is doing a great job; and the tendency to blame either Israel or America for the region’s problems. So if a big mistake has been made, it is that approach that has proven to be in the chimp category.

In early October 2010 I wrote an article based on actually reading what the Muslim Brotherhood leaders were saying. It was titled “The Egyptian Muslim Brotherhood is Declaring Jihad on America; Will Anyone in America Notice?” And they were signaling a change in their traditionally cautious strategy to go for revolution. Why? They told us: President Husni Mubarak was on his last legs, the regime seemed uncertain, America was weak, and their assessment was that the revolutionary Islamist forces were advancing everywhere.

By the time the uprising broke out, in January 2011, numerous voices were raised in warning. If the mainstream were to be honest, it would have to admit that those voices included Rush Limbaugh, Mark Levin, Sean Hannity, and Glenn Beck.

Read the rest of Rubin’s column. Egypt has a desperate situation financially and will be unable to pay for food imports this fall.

At the current rate of decline there are only 11 months left before the coffers are empty. That should concentrate minds in Cairo – but whether it will is another matter.

Raza Agha of RBS argues that there is even less room for manouver than these headline numbers published on Thursday suggest.

More detailed figures for the end of September, released after a lag by the Central Bank of Egypt (CBE), show that the actual level of liquid reserves – that is, convertible foreign currencies including securities, cash and deposits – may be falling faster than net international reserves.

So Egypt has little choice but to secure international financial support at the International Monetary Fund or elsewhere. The authorities rejected an IMF financing package in June and a Fund team left Cairo on Thursday without announcing anything. Perhaps Egypt is banking on securing Arab assistance, from Saudi Arabia and/or the Gulf.

Egypt imports most of its food and food prices have been climbing world wide. Why is Egypt so dependent on imports ? 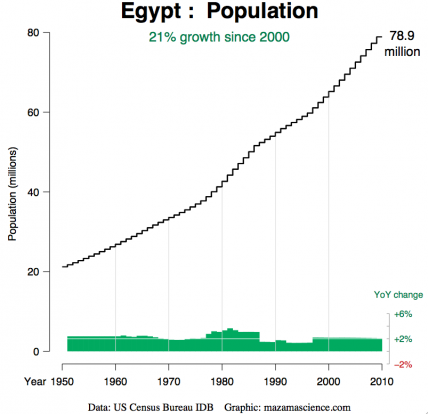 At the time of Nasser’s revolution in 1952, the population of Egypt was 21 million and change. That was up from about 14 million in 1940. Since then, it has increased to the present 80 million. Food production has actually declined.

Egypt is reported to be the world’s largest importer of wheat. In 2010, the oil minister stated that Egypt imports 40% of its food, and 60% of its wheat. The problem this year is that world wheat production is down (at least in part due to weather problems in Russia) so world exports are down:

A longer term problem, though, is that world wheat production has not been growing to keep up with growing world population. Part of this lack of growth may be competition from biofuels. Part of the lack of growth also relates to the fact that the “green revolution” improvements (adding irrigation and fertilizer) are mostly behind us. While irrigation and fertilizer greatly improved production at the time of the change, gains in production since 1990 have been much smaller.

Yes, the Obama and European focus on alternative energy is leading to starvation in some parts of the world.

How do Islamist governments do at feeding their population ? Not so well.

Reports this week suggest Iranian companies are finding it increasingly difficult to import food, raising the specter of a political crisis ahead of the parliamentary elections on March 2, 2012. Tehran is trying to a get around the issue by bartering food for oil, but a close look at the data suggests this will only be a partial solution at best.

Since the passage of US legislation sanctioning the Central Bank of Iran and decision by the European Union to ban imports of Iranian crude, attention has been focused on the country’s oil sales and the impact increased Western pressure will have on Tehran’s export revenue. But so far it looks like the most significant trade disruptions are occurring on the import side instead. In the past week Indian firms have held up wheat and rice shipments and Singapore-based traders have stopped selling Malaysian and Indonesian palm oil out of fear they won’t get paid.

Iran has to import food and the oil sanctions will hinder this. Too bad Iran isn’t self supporting in food.

While not quite as dependent on foreign food as many of their neighbors in the Middle East, Iranians still depend on imports for more than a third of the calories they consume each day. Iran imports more than half the rice and maize it consumes, as well as soy beans and other oil crops or oil products (figure 2). Most of the maize and soy is used as animal feed, but impacts the price and availability of meat and dairy. Iran is also dependent on foreign barley, though this accounts for a relatively low share of overall caloric intake. Imported wheat accounts for less than 10 percent of domestic demand. But since half the calories the average Iranian consumes each day come from wheat, even this level of import dependence could be a liability.

India (!) is a major source of food for Iran.

India has reportedly offered to utilize the new rupee arrangement with Iran (see Iran’s Oil for Rupee Program, February 6, 2012) to barter oil imports for wheat, tea, and other agricultural exports. Expect to see a significant increase in Indian food sales in the months ahead as New Delhi looks to maximize exports to Iran under the rupee arrangement and Tehran tries to keep agricultural imports flowing.

But among Iran’s major oil customers, India is the only significant exporter of the cereals, oil crops, and oil products Iran needs (figure 3). And even India doesn’t sell enough globally to meet Iranian demand (or come close to balance out what Indian refineries pay Tehran for oil). So unless India starts transshipping food products from other producers or Iran’s other large food suppliers start buying Iranian crude, “oil-for-food” barter is going to have limited effect. While there is some prospect for both, they will only partially mitigate the payment problems Iranian food importers now face. And foreign suppliers will likely charge a premium for their troubles, which will further inflate domestic food prices already skyrocketing thanks to sanctions-induced rial depreciation.

Before the Green revolution, India was a world basket case in food. Now, it is an exporter. Maybe the Islamists should think about that for a bit. In the meantime, Egypt will be starving by the end of the year. Their prospects for improvement are nil since tourism is destroyed for a decade or more. Any woman who goes to Egypt ignores the risks to women in Cairo and not just to Egyptian women. We will see how this plays out over the next year, hopefully with a new administration that adopts sensible policies.