Since Johnathan posted a picture of the Captin’s Market last week, I thought I may as well post a picture of my favorite corner gas-station and mini-mart. The exterior is … deceptive. The inside of it is very different from what you would expect, just driving past. 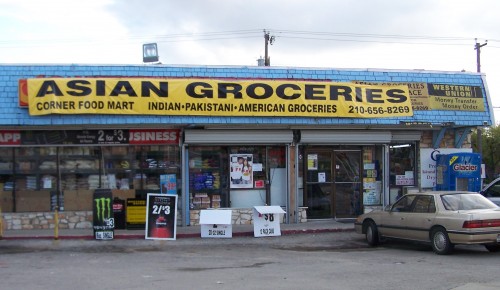 The Muslim Brotherhood candidate has now been declared the winner of the Egyptian election. Some foolish things are being said, as a consequence.

Morsi’s election is tempered by the army’s recent move to significantly limit the powers of the presidency regarding the national budget, military oversight and declaring war. Following a court ruling this month to dissolve the Islamist-controlled parliament, the military also seized legislative powers and is angling to cement its legal authority over the nation by guiding the drafting of a new constitution.

The military will not be able to control the destiny of the country. The army in Turkey was much stronger with a 60 year history of secularism and a recognized right to displace governments that violated Ataturk’s intent. Since the election of Erdogan, the army has been neutered and half the senior officers are in prison, either with no charges or trumped up charges.

Barry Rubin has a pessimistic view of the future for Egypt.

First, what does it tell about the West? The answer is that there are things that can be learned and understood, leading to some predictive power, but unfortunately the current hegemonic elite and its worldview refuse to learn.

What could be more revealing of that fact than the words off Jacqueline Stevens in the New York Times: “Chimps randomly throwing darts at the possible outcomes would have done almost as well as the experts”? Well, it depends on which experts. Martin Kramer, one of those who was right all along about Egypt, has a choice selection of quotes from a certain kind of Middle East expert who was dead wrong. A near-infinite number of such quotes can be gathered from the pages of America’s most august newspapers.

These people all share the current left-wing ideology; the refusal to understand the menace of revolutionary Islamism; the general belief that President Barack Obama is doing a great job; and the tendency to blame either Israel or America for the region’s problems. So if a big mistake has been made, it is that approach that has proven to be in the chimp category.

Pakistan’s beliefs in the value of seeking strategic depth in Afghanistan were influenced by two factors. The support it received from the U.S. in waging an armed response against the Soviet occupation triggered the belief. The success of that endeavour with no apparent costs to itself, gave Islamabad the illusion of being able to play a major role in the geo-politics of Central Asia. This more than anything else led to the belief that Afghanistan provided the strategic leverage Pakistan had long been seeking. The energy-rich Muslim states of Central Asia beckoned both Pakistan and the energy-seeking multi-nationals. Iran’s standing up to western pressures was proving an obstacle to long-term plans for energy extraction from the region. Afghanistan offered both shorter energy routing and political control through Pakistan.

Pakistan’s intelligence agency, the ISI, “wants a reliable proxy that has territorial control of the P2K area,” Mr. Dressler adds. This desire is the result of Pakistan’s historic conflict with India. “If India comes across the border, Pakistan can fall back into Afghanistan and drive them out. It’s about strategic depth vis-à-vis India. As long as that continues to be a driving concern, Pakistan’s support for the Haqqani network will continue.”

A highly plausible future scenario indeed (regarding the second quoted item). In the event that the Indians decide on a massive ground invasion into Pakistan and march sturdily through the landscape of jihadi-networks and scattering Pakistani troops – with nary a nuke in sight and the US sitting idly by – it sounds like a winner of a strategy. The supply lines to the Indians will, of course, be Bollywood unicorns pooping ammunition and some sort of MREs.

On the other hand, serious people seem to take Pakistani strategic depth worries seriously. The Indians are forever being told that they must take Pakistani fears of regional encroachment into account so that the United States (ISAF) may have a negotiated settlement in Afghanistan that is stable. Although….

My basic point, lost in the midst of all of those excerpts, is that despite having “full” strategic depth in Afghanistan during the time period of the Kargil War, a conflict occurred between the two.

– from a comment I made in this thread at Small Wars Journal (regarding the theory that strategic depth in Afghanistan may prevent conflict between India and Pakistan).

I think a strategy that brings about the very thing you claim to be worried about (the Indians in Afghanistan with ISAF supporting a reasonably India-friendly government) seems like a loser to me. Want to see the math?

1. Pakistan supports the Taliban in Afghanistan for purposes of “strategic depth.”
2. The Taliban invites in Al Q.
3. 9-11 happens and Americans and others are murdered.
4. Americans invade Afghanistan.
5. India follows with the rest of the development crowd….

See? A loser of a strategy in terms of the vaunted s.d.

What say you ChicagoBoyz commenters? Have I got it totally wrong? Am I a total paranoid? A partial paranoid? Leave a comment below if you must….

The United States can influence the choice only at the margins, but we must do what we can to signal to the army leadership that we will stand behind them if they decide to do more to take on the radicals. In this connection, it is highly useful that President Obama has agreed to NATO’s timeline not to transition security responsibility in Afghanistan until 2014. That should put to rest some immediate concerns about America’s fickleness as an ally and reassure the Pakistani army that we will stand with the forces of moderation in Pakistan should they do more to battle the growing religious extremism that threatens the very survival of the state.

Respectfully, the Army is not a force of moderation. They are following a long-cherished regional strategic plan that has nothing to do with our alleged “fickleness.” Given China’s monetary support of the regime, I wager the Pakistani Army/ISI will continue to think they can play various networks to their advantage. 2014 or no. Sorry to be so cynical. I hope I am wrong.

Even Bollywood could not stay away from using the Obama metaphor. In an upcoming Hindi film titled “Phas Gaye Re Obama” (“Obama Is in a Fix”), director Subhash Kapoor said he portrays a bunch of Obama-loving Indian gangsters struggling amid the economic recession. The comedy isn’t coming out until after the president’s visit.

Washington Post (There is a nice slide show of American presidents in India at the link.)

2. NDTV video link to President Obama’s town hall with Indian students at St. Xavier’s College in Mumbai. One of the students asks a pretty tough question about the midterms at 15:00.

The president viewed a demonstration of a new system called “e-Panchayat”, a new effort to enable people in the more than 400 local districts across India to obtain and share information.

5. “President Obama’s visit to India, Day 1: The Obamas at Mani Bhavan “There were no human bombs then.” – Pundita (Pundita has several very good posts on the visit.)

Mr. Kamdar had a word of praise for the U.S. security personnel as well. “They weren’t at all obstructive. We could not make out who were the security and who were the staff. Everything went on so smoothly and naturally,” he said.

The Indian Question dominated a fascinating conference on the Anglosphere in Winchester yesterday, co-hosted by two of the greatest conservative editors on the planet: Daniel Johnson of Prospect, and Roger Kimball of The New Criterion. Some of the cleverest and most contrarian men in the US, Canada, Australia, New Zealand and India were present.

James Bennett, who more or less invented the Anglosphere, saw India as the key. While it might be awkward to talk of a nation of 1.3 billion people “joining” a club of 400 million, the orientation of India would determine the relative power of the English-speaking democracies for the rest of the century.

There has been a fair amount of negative press recently for Team India because of the Commonwealth Games. Kashmir is everywhere in the news, too. We shall see.

Update: I am using “Team India” in the way that the press often refers to the “Team India versus Team China” rivalry. Personally, I’m a little more worried about Team America’s recent play. I’m sure we’ll right it eventually. I firmly believe that.