Wolf Point is a famous piece of land that is a penninsula where the Chicago River is on three sides, right in front of the Holiday Inn and adjacent to the Merchandise Mart. Recently the Kennedys, who own this land, proposed building three giant high rises on the site, as described in this article. 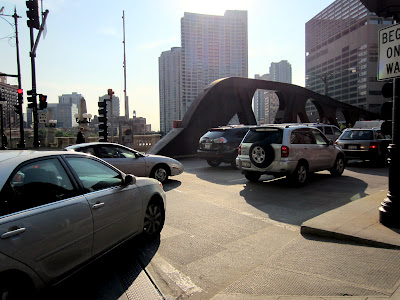 Of all the habitual liars in this world, one of the most odious has to be the “traffic consultant”. One of these firms, hired by the Kennedys, gave a report on the impact of traffic, and per the article:

Residents also suggested the development would further clog already-congested streets and mocked a traffic consultant’s conclusion that the project would not significantly worsen traffic.

To some extent, per the picture above, it is impossible to further “worsen” traffic. This is a photo taken during rush hour that is relatively typical; the bridge going north on Orleans (it is one-way) is completely gridlocked leading towards the Wolf Point site and backed up into Wacker drive, blocking both streets. Thus to some extent the consultant is right, because you can’t get worse than gridlock.

The groups that will be the most angry by this development are the residents of the condominium called the Riverbend, which you can see adjacent to the Holiday Inn in the picture below. They are screaming because their view down the river will be blocked, so they are packing protest meetings called by the alderman. 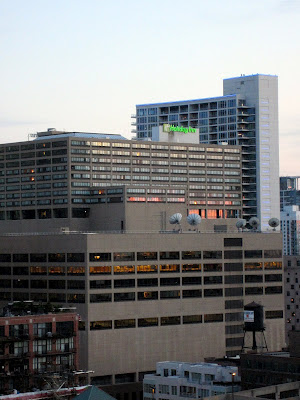 Based on past experience, the fact is that traffic will move from gridlock to something worse than gridlock (is that possible?) and the residents’ protests will fall on deaf ears because the developers typically get their way in this town, and this is especially the case for the well-connected Kennedys in an old-school Democratic “machine” city like Chicago.

The real obstacles are financing. The cost of this development will be astounding, at over $1B, and I expect that most of this will be financed (from some hapless lending institution). Many of those that funded condos and condo hotels went bankrupt and were seized by the Federal Government (i.e., “you” the taxpayer ended up paying for it) during the 2008 crash but apparently someone is lending since the skies are once again full of cranes.

Another interesting element is the fact that Wolf Point was once the proposed site for a 140 story building, per Emporis, the online dictionary of skyscrapers (I highly recommend it, a lot of fun to tool around the site). That was back in the day when the US “reached for the sky” until we were overtaken by other countries, although one of the buildings is 900 feet high (compared to the 1742 feet high proposed skyscraper they were to start building in the 1960s).