We were in Comfort this last Saturday … no, that doesn’t mean we were comfortable, exactly – just that we were in Comfort, Texas – a nice little town about an hour’s drive north from San Antonio, a lovely little Hill Country town situated where the Guadalupe River is crossed by the IH-10. In the larger world, Comfort is known for being the final burial place of a number of German Unionists, who either died in a vicious fire-fight on the Nueces River in August of 1862 or were murdered shortly afterwards. I was there because … well, this is the community in which a number of my books are set, and the ‘middle’ book of the Trilogy covers this tragic period. So, when another writer and enthusiastic local historian told me at the Meusebach Birthday celebration that I really ought to get in with this one … and we swapped copies of our books … well, I really must do things like this, meet people, talk to fans, and sell some books. It’s not a chore to actually be there and do that, but setting it up is sometimes a bit of a job and full marks to Blondie for taking the bull by the horns.

The plan was that a number of other local authors, some of whom had books about the Germans in the Hill Country, the Civil War in the west, or about the Nueces Fight and the subsequent execution of a number of Hill Country Unionists would have table space to sell their books at a picnic luncheon in the Comfort City park which would follow the commemoration ceremony and wreath-laying at the monument. After the the luncheon, there would be a symposium in the parish hall of the Lutheran Church … and we could set up again to vend books, through the good offices of the Comfort Historical Association … for a simple donation of 20% of total sales to them when all was done for the day. We headed up to Comfort, located the park without much problem, and set up on our portion of table, which was just large enough and under the shade of the park pavilion. 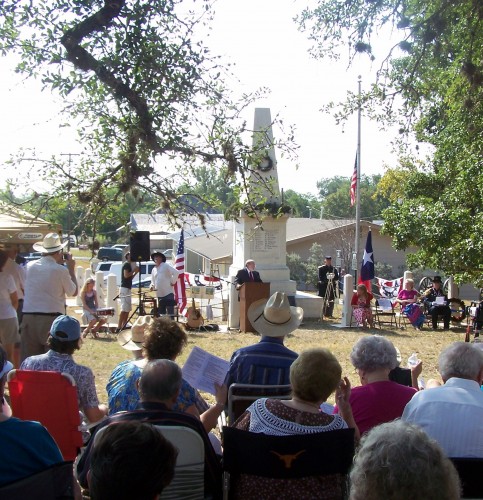 So, I missed most of the commemoration at the monument itself, although I did go up and take some pictures during the ceremony – while William Paul Burrier was explaining on what exactly had happened during the early morning hours of August 10th, 1862 on the bank of the Nueces River. He has explored those events and personalities involved to almost the sub-atomic level. (Alas, I can’t find any links to the book that he has written about it all.) Pictures taken, I spelled my daughter so that she could go and check out an interesting resale shop just across the field from the park … and then the three cannons at the memorial gathering were fired, and everyone came down to the park. There is a small problem at events like this – trying to eat. Just as you’re ready to tuck in to your plate, there are three or four people wanting to talk to you. Our place at the table was next to Carlos Juenke, who is from Fredericksburg, and has read the Trilogy and loved it extravagantly … and so, I hardly got to eat much lunch or look at any of the other writer’s tables. It was a large crowd, and very lively for nearly two hours – and then pack it all up, and drive around the block to the symposium venue … which was a bit more cramped, but indoors in the AC… bliss it is to finally go indoors, on a sultry August afternoon in South Texas.

The symposium was interesting – always interesting to see working historians going at it, although it was sidelined for some time when Mr. Burrier began talking about his current project – debunking many of the current conceptions held about the Adelsverein generally. He was of the opinion that Prince Solms and his confreres seriously intended to establish a working German colony in Texas – that their ambitions were on the colonial-imperialist side rather than more economic and charitable. This caused an intake of breath through-out the room, and Mr. Kearney got up to contest that – and being pretty well versed in the contents of the official Mainzer Adelsverein archives, he could quote chapter and verse. For a few moments, I thought we might have another civil war on our hands, right then and there. However, as a relatively phidless (PhD-deprived) scribbler of historical fiction, I was beneath the notice of the professional historians – in fact, one of the academic gentlemen barely concealed a sneer as he departed at speed from in front of my table once I explained that they were all novels. Well, given the usual sort of historical fiction and historical romance, one can hardly blame him, but it is altogether likely that casual readers have learned more local history from reading my books than ever did from reading his.

Ah well – a nice day, in a nice place, with nice people. And we bought a whole smoked chicken from the Riverside Market in Boerne for dinner on the way home. What could be better than that?
(Cross-posted at www.ncobrief.com and at my book blog.)