We were in Comfort this last Saturday … no, that doesn’t mean we were comfortable, exactly – just that we were in Comfort, Texas – a nice little town about an hour’s drive north from San Antonio, a lovely little Hill Country town situated where the Guadalupe River is crossed by the IH-10. In the larger world, Comfort is known for being the final burial place of a number of German Unionists, who either died in a vicious fire-fight on the Nueces River in August of 1862 or were murdered shortly afterwards. I was there because … well, this is the community in which a number of my books are set, and the ‘middle’ book of the Trilogy covers this tragic period. So, when another writer and enthusiastic local historian told me at the Meusebach Birthday celebration that I really ought to get in with this one … and we swapped copies of our books … well, I really must do things like this, meet people, talk to fans, and sell some books. It’s not a chore to actually be there and do that, but setting it up is sometimes a bit of a job and full marks to Blondie for taking the bull by the horns.

Late in the fall of 1862, under the mistaken assumption that they had been offered a thirty-day amnesty by the Governor of Texas and allowed to depart Texas unmolested rather than take the loyalty oath, a party of Unionists gathered together at Turtle Creek in Kerr County. They elected a settler from Comfort named Fritz Tegener as their leader, and Henry Schwethelm as second. Their number included Phillip Braubach, who had served as the sheriff of Gillespie County, and Captain John Sansom, a Texas Ranger before and after the war, and also the sheriff of Kendall County, two sons of Edwin Degener, a prominent free-thinker from Sisterdale, Heinrich Steves, whose large family had helped establish Comfort, and the Boerner brothers, one of whom had married a Steves daughter. Heinrich Stieler was also one of them; he was Henry Schwethelm’s brother-in-law and son of Gottlieb Stieler, an early settler whose family later established a ranch between Comfort and Fredericksburg which still exists today. 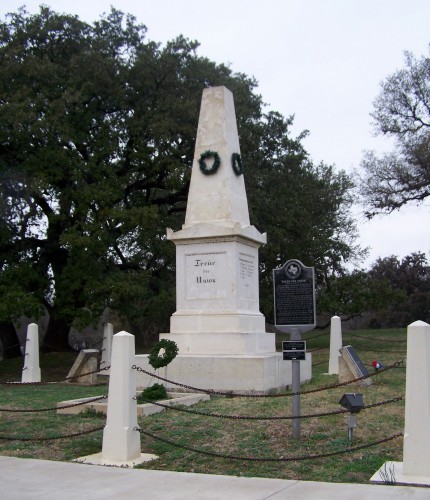