From time to time Dan and I just agree to “give up” on certain types of blog posts because they are repetitive. One of those types of posts involve journalists missing the entire point and purpose of what they are writing about. 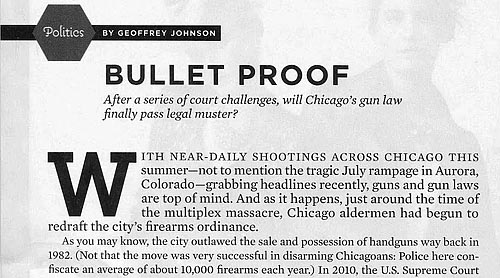 And yet this article from Chicago Magazine was such an egregious offender that it caused me to need to write a post on it.

The article starts with the traditional journalistic chestnut – the protagonist. In this case, it is how Mr. Patton, the corporate counsel of the city of Chicago, can adjust the gun control laws as little as possible to meet the terms of the latest court decision that gives citizens access to firearms. In the end, the counsel for the city of Chicago “doesn’t anticipate” any further legal challenges to the gun laws, a comment that the reporter accepts at face value. And finally, the article ends with this:

“We’re committed to achieving the greatest extent of gun control that’s lawfully possible while still complying with the Second Amendment,” he says. “It’s something we can do in the city’s overall effort (against) gun violence. It’s a plague, and we’re doing everything we can to fight it.”

And with that final quote from the protagonist, the “article” is ended.

Note how this article likely sailed through “fact checking”, because the corporate counsel really did say all those things, and the events listed did occur in that chronological row. However, the FACTS ARE WRONG.

Even the most cursory analysis of the situation on gun control by this “journalist” would have turned up salient facts that were completely relevant to the situation. The NRA does intend to aggressively fight and issue lawsuits against the City of Chicago and all other municipalities that limit second amendment rights, and this could be found everywhere on the internet or by spending even 5 seconds calling the NRA, which the writer didn’t bother to do.

More subtle than that obvious issue, is the fact that Chicago, which has among the strictest handgun laws in the country, is among the leaders in carnage caused by handguns, indicating plainly that these laws do not work in terms of keeping guns out of the hands of criminals and only work to deter law-abiding citizens from the ability to protect themselves from these criminals.

I won’t even bother to link to the latest articles showing shootings in Chicago which spike every weekend; they are everywhere and available to everyone, even this “journalist”.

While Chicago is a notorious hotbed of handgun violence, all the states around us have embraced concealed carry and limited restrictions on citizens, without the “wild west” shootouts promised by detractors. Chicago citizens travel every day into Indiana and now Wisconsin without fear of regular citizens harming them, while they would be scared to venture into their own neighborhoods “protected” by these city laws supposedly limiting gun violence.

The ideas that guns can be banned from a small corner of the populace is just irresponsible and ludicrous given that there are hundreds of millions of them across the US and that the tide of the second amendment has passed through almost every state of the union except for Illinois which ought to be a salient fact.

7 thoughts on “How To Be A Terrible Journalist – Chicago Magazine”