President Obama faces his own “9/11” today as Islamist crowds attacked both America’s Libyan and Egyptian embassies and killed our Ambassador in Libya and two other Americans with a rocket.

So what can we expect from Pres. Obama?

A strongly worded diplomatic communique? A demarche? An Arclight air strike across Libya?

What we seem to have gotten was a weakly worded diplomatic communique with a political back pedal, when criticized.

If this follows the usual Obama Administration script, expect to see multiple emails asking for campaign contributions based on Gov. Romney “not stopping criticism of the American government at the water’s edge“.

UPDATE:
Gatewaypundit now has photos of Ambassador J. Christopher Stevens’s body being paraded through the streets of Libya.
What I cannot believe is that both President Obama and Secretary of State Hillary Clinton are claiming those photos are of the Ambassador being taken to a hospital.
We should be getting a Pres. Theodore Roosevelt “America wants Pedicaris alive, or Raisuli dead!”. 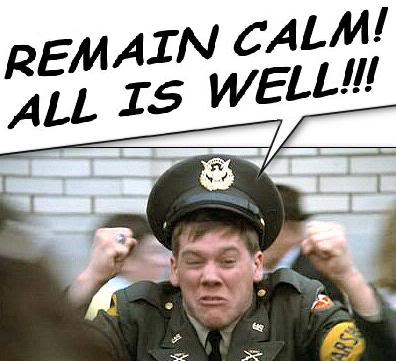 Instead we are getting the ROTC Cadet from ANIMAL HOUSE screaming “REMAIN CALM. ALL IS WELL!” as the riot engulfs him.