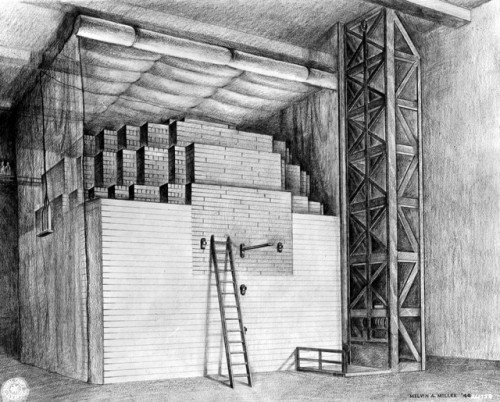 “On the afternoon of December 2, 1942, the Atomic Age began inside an enormous tent on a squash court under the stands of the University of Chicago’s Stagg Field. There, headed by Italian scientist Enrico Fermi, the first controlled nuclear fission chain reaction was engineered. The result—sustainable nuclear energy—led to creation of the atomic bomb and nuclear power plants—two of the twentieth century’s most powerful and controversial achievements.”

I was there halfway between then and now. I am a by-product of the Manhattan Project, being the son of a onetime rifleman in an infantry platoon who was on a troopship in the Pacific on August 6, 1945, in transit for Operation Downfall. He went to the Philippines instead, and never heard a shot fired in anger. I did not matriculate at Chicago to repay a debt – which is fortunate, because as things went, the University spent a good deal of money on me for (so far) no return whatsoever.

Earlier today I went to a lecture, “Talking Tolkien: War and J.R.R. Tolkien,” in the appropriately subterranean research center of the National World War I Museum at Liberty Memorial. It was given by Janet Brennan Croft of the University of Oklahoma, who has a book out that I suppose I will buy, to add to the same shelf containing the Hobbit, the trilogy, the Silmarillion, the Letters, and Tolkien and the Great War (all of which were referenced at some point in her talk).

I didn’t hear all that much that was new, but I didn’t expect to. It was well worth going, however; I suppose the biggest “delta” was about how his writing changed after he had children and especially when two of them served in the military in WWII. She also pointed out that all the heroic leaders in the trilogy lead from the front, while the villainous leaders are far in the rear, the equivalent of the “chateau generals.”

Another insight was how much the “black breath” and Frodo’s melancholia resemble PTSD. In combination with her remarks about parent-child relationships, this caused me to ask a question about what turns out to be Letter #74, written to Stanley Unwin on 29 June 1944, which includes the sentence: “I have at the moment another son, a much damaged soldier, at Trinity trying to do some work and recover a shadow of his old health.” – a reference to his son Michael, who was pretty severely PTSD’d for a while. So out of slightly morbid curiosity, I asked if she knew anything more about that episode. She did not but said that there are probably more letters, unpublished, that would have details, and perhaps they will eventually see the light of day.

Scripture reading in church this morning was Isaiah 2:1-5. Verse 4 is of course poignant in light of today’s anniversary. If we really are entering the Crisis of 2020, those swords won’t be beaten into plowshares any time soon. Indeed, some future analog of December 2nd, 1942, presumably involving nanomachinery rather than tons of graphite blocks and lumps of enriched uranium, will happen in a laboratory somewhere in the world in another decade or so.