I was out walking at night in River North when I came upon a cool looking sports car outside on the street. I hadn’t seen one of these before so I took a photo to look it up. 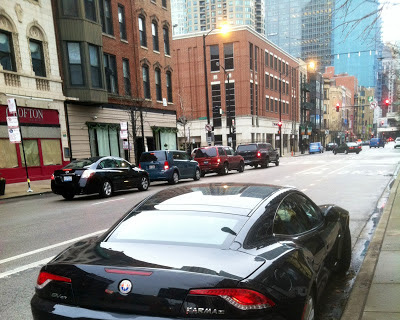 When I woke up in the morning and was reading my old-school paper copy of the Wall Street Journal, I saw on the front page of the finance section an article titled “Its Battery Drained, Fisker Hunts for Partner” with a picture of my Fisker Karma in color. Per the article:

Fisker Automotive, the troubled maker of a battery-powered sports car, is accelerating a global search for a strategic partner to keep its business going…Fisker has taken steps to reduce its cash use. In July, it halted production of its sole vehicle, the $110,000 Karma, to lower production costs. The Karma has been hobbled by recalls and quality problems.

Who thought that we needed another sports car, in a market glutted with them? Why the US Government, of course. Per wikipedia:

In 2010, the Department of Energy awarded Fisker a $529 million green-energy loan, primarily to assist the company in transitioning the Karma, which is assembled in Finland, into the American markets. Fisker collected nearly $200 million until February this year, when the government froze the loan because the company was failing to meet the government’s milestones

What is also apparently hurting Fisker is that they can’t obtain batteries from A123 Systems, Inc. Bizarrely, the Wall Street Journal didn’t even mention that NOT ONLY did the US government bankroll Fisker on their futile plan to create another un-neeed sports car, but they also bankrolled A123 Systems in their battery development, per Wikipedia:

The company received US$249 million grant from the Department of Energy for building battery production facilities. As of June 2012, $129M of the grant has been used to build the 550 MWh Livonia plant and the Romulus plant. Remaining untapped $120M grant’s expiry date has been extended from end of 2012 to end of 2014. The company laid off 125 workers in December 2011 as demand for partner Fisker’s automobiles has been slack.

It is astounding to me that the government decided to build up an entirely vertically integrated chain of industry in order to produce a sports car that is unreliable that no one apparently wants to buy. And yet this is likely one of the most tangible “products” that the stimulus package delivered.

Also I am still shaking my head that the normally OK WSJ (for main stream media) didn’t see the further lunacy beyond just Fisker’s imminent demise in that it was linked to the troubles of A123 Systems. A Wikipedia search like yours truly could have figured that out.

Back when I took courses on economics and socialism they spoke of the government’s inability to allocate capital as a core problem with top down socialism. This is exhibit A. It is one thing to prop up an already existing business like the auto industry or banks (not always a good idea) which needs restructuring or a short term cash infusion, but starting an integrated value chain industry from scratch is beyond a longshot, it is lunacy.