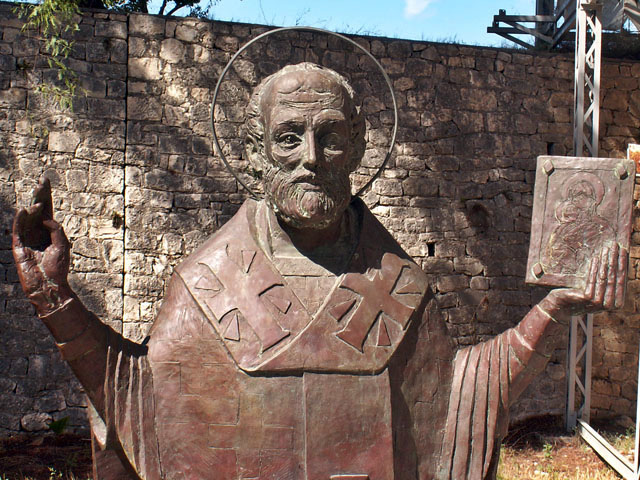 The metamorphosis of Saint Nicholas into the more commercially lucrative Santa Claus, which took several centuries in Europe and America, has recently been re-enacted in the saint’s home town: the city of Demre. This modern Turkish town is built near the ruins of ancient Myra. As St. Nicholas is a very popular Orthodox saint, the city attracts many Russian tourists. A solemn bronze statue of the Saint by the Russian sculptor Gregory Pototsky, donated by the Russian government in 2000, was given a prominent place on the square in front of the medieval church of St. Nicholas. In 2005, mayor Suleyman Topcu had the statue replaced by a red-suited plastic Santa Claus statue, because he wanted the central statue to be more recognizable to visitors from all over the world. Protests from the Russian government against this action were successful only to the extent that the Russian statue was returned, without its original high pedestal, to a corner near the church.

Alas, poor Russia. So far from God, so close to the North Pole.

Merry Christmas to all and to all a good night.

3 thoughts on “Christmas: A Parthian Shot”