UPDATE: An an article at Belmont Club describes interest in alternative money creation as a way of anticipating inflation. It also goes further into a discussion of general competence.

The idea that Virginia should consider issuing its own money was dismissed as just another quixotic quest by one of the most conservative members of the state legislature when Marshall introduced it three years ago. But it has since gained traction not only in Virginia, but also in states across the country as Americans have grown increasingly suspicious of the institutions entrusted with safeguarding the economy.

What has changed is faith in the federal government, not just in Virginia but in a growing number of places. The lack of faith in the competence of government — and the soundness of the dollar — has been growing leading some states to create contingency plans in case the currency goes bust.

Once again, I apologize for my pessimism but this is what I see. First, there is this article, which quotes a well known financier.

There may be a natural evolution to our fractionally reserved credit system that characterizes modern global finance. Much like the universe, which began with a big bang nearly 14 billion years ago, but is expanding so rapidly that scientists predict it will all end in a “big freeze” trillions of years from now, our current monetary system seems to require perpetual expansion to maintain its existence. And too, the advancing entropy in the physical universe may in fact portend a similar decline of “energy” and “heat” within the credit markets. If so, then the legitimate response of creditors, debtors and investors inextricably intertwined within it, should logically be to ask about the economic and investment implications of its ongoing transition.

Certainly “growth” seems to be fundamental to our economic health. That, of course, presumes a growing population but it also would be affected by a stagnant population with a growing age disparity. The obvious example of the latter is Japan.

The creation of credit in our modern day fractional reserve banking system began with a deposit and the profitable expansion of that deposit via leverage. Banks and other lenders don’t always keep 100% of their deposits in the “vault” at any one time – in fact they keep very little – thus the term “fractional reserves.” That first deposit then, and the explosion outward of 10x and more of levered lending, is modern day finance’s equivalent of the big bang. When it began is actually harder to determine than the birth of the physical universe but it certainly accelerated with the invention of central banking – the U.S. in 1913 – and with it the increased confidence that these newly licensed lenders of last resort would provide support to financial and real economies. Banking and central banks were and remain essential elements of a productive global economy.

The effect of asset bubbles on such a system is worrisome as the history of Japan and the recent history of the US have shown. The Panic of 1907 was largely responsible for the creation of the Federal Reserve. That financial crisis is thought, by the authors of a recent book

, to have been a consequence of the 1906 earthquake in San Francisco, which destroyed a large amount of real assets and the insurance costs that were associated. The immediate cause was financial speculation but the real losses had added to the fragility of the system.

The panic of 2008, for that’s what it was, may have been a delayed reaction to the 9/11 attack and the loss of assets in the World Trade Center destruction, plus the costs of declining air travel. This followed shortly the collapse of the internet bubble of the 1990s. There is some evidence that Alan Greenspan was responsible for the real estate bubble as he held interest rates far too low and fed the speculation. 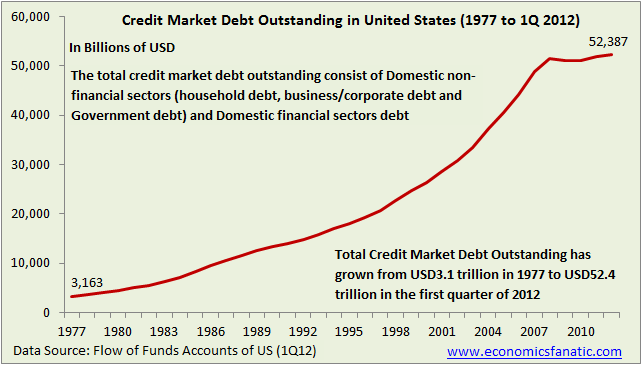 The growth of credit market debt since the 1971 decision to abandon gold as the standard for the dollar.

today’s near zero bound interest rates cripple savers and business models previously constructed on the basis of positive real yields and wider margins for loans. Net interest margins at banks compress; liabilities at insurance companies threaten their levered equity; and underfunded pension plans require greater contributions from their corporate funders unless regulatory agencies intervene. What has followed has been a gradual erosion of real growth as layoffs, bank branch closings and business consolidations create less of a need for labor and physical plant expansion. In effect, the initial magic of credit creation turns less magical, in some cases even destructive and begins to consume credit markets at the margin as well as portions of the real economy it has created. For readers demanding a more model-driven, historical example of the negative impact of zero based interest rates, they have only to witness the modern day example of Japan. With interest rates close to zero for the last decade or more, a sharply declining rate of investment in productive plants and equipment

The parallel is uncomfortable. There is, of course, another model, that of Argentina. 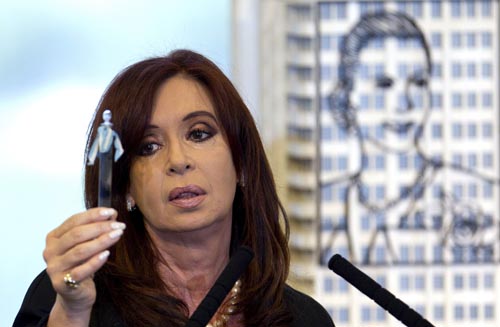 The price freeze applies to every product in all of the nation’s largest supermarkets — a group including Walmart, Carrefour, Coto, Jumbo, Disco and other large chains. The companies’ trade group, representing 70 percent of the Argentine market, reached the accord with Commerce Secretary Guillermo Moreno, the government’s news agency Telam reported.

The commerce ministry wants consumers to keep receipts and complain to a hotline about any price hikes they see before April 1.

Polls show Argentines worry most about inflation, which private economists estimate could reach 30 percent this year. The government says it’s trying to hold the next union wage hikes to 20 percent, a figure that suggests how little anyone believes the official index that pegs annual inflation at just 10 percent.

We also risk hyperinflation as the Fed creates money at the present pace.

Credit is now funneled increasingly into market speculation as opposed to productive innovation. Asset price appreciation as opposed to simple yield or “carry” is now critical to maintain the system’s momentum and longevity. Investment banking, which only a decade ago promoted small business development and transition to public markets, now is dominated by leveraged speculation and the Ponzi finance Minsky once warned against.

Note this: There are basically five stages in Minsky’s model of the credit cycle: displacement, boom, euphoria, profit taking, and panic. A displacement occurs when investors get excited about something—an invention, such as the Internet, or a war, or an abrupt change of economic policy. The current cycle began in 2003, with the Fed chief Alan Greenspan’s decision to reduce short-term interest rates to one per cent, and an unexpected influx of foreign money, particularly Chinese money, into U.S. Treasury bonds. With the cost of borrowing—mortgage rates, in particular—at historic lows, a speculative real-estate boom quickly developed that was much bigger, in terms of over-all valuation, than the previous bubble in technology stocks.

So our credit-based financial markets and the economy it supports are levered, fragile and increasingly entropic – it is running out of energy and time. When does money run out of time? The countdown begins when investable assets pose too much risk for too little return; when lenders desert credit markets for other alternatives such as cash or real assets.

I don’t know when the music will stop. I hope I don’t see it. I worry about my children but three of the five voted for Obama and will have to accept the consequences.