A few things have happened recently that have the hairs on the back of my neck standing up in economic terms. It feels like it did right before the crash in 2007-8, when we were still in the end stages of the bubble.

One – Japanese and Venezuelan devaluation

Japan (a thoroughly modern economy) and Venezuela (a semi-dictatorship oil economy) both recently devalued their currency. Japan was warned by the G7 (fat lot of good that will do) here about it:

The official said: “The G7 statement signaled concern about excess moves in the yen. The G7 is concerned about unilateral guidance on the yen. Japan will be in the spotlight at the G20 in Moscow this weekend.”

Venezuela did more of an “old school” devaluation, where the “official” rate is moved closer to what it really is trading for in the black market, and Bloomberg writes about it here.

Venezuela devalued its currency for the fifth time in nine years, a move that may undermine support for ailing President Hugo Chavez and his allies ahead of possible elections later this year… He ordered his government to weaken the exchange rate by 32 percent to 6.3 bolivars per dollar… A spending spree that almost tripled the fiscal deficit last year helped Chavez, 58, win a third six-year term. The devaluation can help narrow the budget deficit by increasing the amount of bolivars the government receives from oil exports. Yet the move also threatens to accelerate annual inflation that reached 22 percent in January.

I kept that whole paragraph in the block quote because it encapsulates all the elements of fiscal ruin so succinctly – profligate government spending, impact on commodities imported or exported (that move opposite of currencies), and the impact on inflation.

I had thought that the Chinese and other countries were big buyers of our debt which funds our budget deficit. But I was wrong. Per this WSJ article:

China’s holdings of $1.17 trillion in U.S. Treasurys in November 2012—the most recent date for which we have a figure—are virtually unchanged from two years earlier, when they stood at $1.16 trillion. Beijing has purchased a lot of Treasurys over this period but many have been redeemed. Net new investment is essentially zero.

But if the Chinese aren’t buying our debt, who is? The answer – the US government.

The largest buyer of new U.S. Treasurys during the past three years has been not China but the U.S. Federal Reserve. In fiscal year 2011, for example, the Fed bought more than three-fourths of all new Treasury debt.

Here’s a challenge for you – try explaining to a child or someone unfamiliar with economics how it is that we can spend money that we don’t have, issue debt, and buy it back ourselves.

In Russia, Putin has taken steps to distance himself from the US dollar and the havoc that it has caused their greatest (and virtually only) export, oil and gas, per Bloomberg.

Not only has Putin made Russia the world’s largest oil producer, he’s also made it the biggest gold buyer. His central bank has added 570 metric tons of the metal in the past decade, a quarter more than runner-up China, according to IMF data compiled by Bloomberg. The added gold is also almost triple the weight of the Statue of Liberty.

Aside from a hatred of the US, why is Putin doing this?

In 1998, the year Russia defaulted on $40 billion of domestic debt, it took as many as 28 barrels of crude to buy an ounce of gold, data compiled by Bloomberg show. That ratio tumbled to 11.5 by the time Putin first came to power a year later and in 2005, after it touched 6.5 — less than half what it is now — the president told the central bank to buy.

Once again this blurb explains the key relationships between commodities, which retain value even when paper currencies are devalued, and the impact on the economy.

“The more gold a country has, the more sovereignty it will have if there’s a cataclysm with the dollar, the euro, the pound or any other reserve currency,” Evgeny Fedorov, a lawmaker for Putin’s United Russia party in the lower house of parliament, said in a telephone interview in Moscow.

I can’t believe that I agree with this guy.

All in, it feels to me like that quote from the movie “28 Days Later” that was scrawled on the wall… 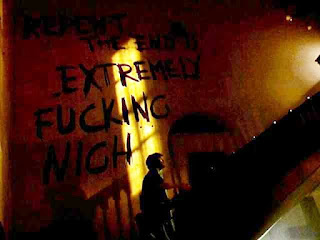 8 thoughts on “It Feels Strange Outside Economically”