Among the tall stack of books which I read in the matter of research for writing my adventures set on the Texas frontier was one titled Texas Log Buildings; A Folk Architecture – which has actually proved to be a bit more interesting and informative than it looked at first glance. I am a sucker for knowing how things are constructed or put together- which is good, especially when I needed to write a description of building such a thing as a log house; details like how many days it would take so many men to build one, what size it would generally be, and the layout – these little details add convincing detail. Until I read that book, the only description of the process that I could bring readily to mind was in Little House on the Prairie – and it turns out that Pa Ingalls was not building that cabin to much of a standard. He may not even have been all that skilled as a carpenter, but since he was working on it mostly by himself, and in a place where the swiftness of getting a roof of some sort over his family counted for everything – allowances were made. 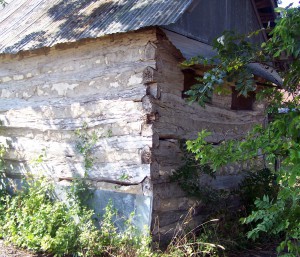 That was almost everyone’s first and most urgent need, upon settling on a new grant or homestead, that and planting some kind of crop in the ground; building a cabin, to meet immediate shelter needs. This book differentiates very clearly the difference between a log cabin, and a log house. A log cabin was small; twelve to fourteen foot square, windowless, and with a dirt floor. They were scratch and hastily put up to use as a temporary dwelling place, whereas a log house was larger, permanent, and much more carefully constructed; even quite elaborate as to comforts. For much of the 19th century, at least in Texas it was a matter of some embarrassment to still be living in a log cabin after a couple of years; rather like living in a trailer would be. In fact, many log houses were covered with siding and paint as soon as their owners could afford to do so. If they had lived in a little cabin before building the permanent house, the cabin was frequently reused as a smoke-house, or a stable.

Pace Little House and a whole raft of western movies, I’d always visualized such houses and cabins built out of the whole, rounded logs, with simple interlocking half-round notches (called a saddle notch) cut close to the ends, and about a foot or so of the log hanging out beyond at the corners, rather like a “Lincoln-log” house. This method of construction turns out have been employed by the relatively unskilled and/or those in a tearing hurry. The majority of Texas log structures were built of timbers which had been at least roughly shaped on two sides, and carefully notched at the ends to make a square corner. With the exception of part log, part dugout shelters built in far western Texas, where trees were scarce, most log structures were also raised off the ground on corner piers, to prevent rot and termite infestation, and to take advantage of air circulation.

Logs were prepped before construction, either by rough-hewing — cutting a shallow straight face on two opposite sides, or “planking”— cutting a thick plank out of the center of the log. In a very small number of cases, each log would be square-hewn, on all four sides, resulting in a heavy, square beam. More usually, only the bottom log — the sill, and the topmost, the “plate” which supported the roof rafters would be squared. These logs would usually be the largest; if the structure was to have a wooden floor, the sills would be mortised, with the floor joists lap-jointed into them. Sometimes a third sill would be added, for extra support.

A log house went up pretty fast, apparently, once all the timbers had been cut and prepped: the book gives an estimate of two men working two days for a fairly simple, square (single pen) structure, and three men working three days for a more elaborate one. (In Daughter of Texas, one chapter describes a ‘house-raising’, where the men of Gonzales raise a two-pen house in a single day, since all the logs and roof-shingles have already been cut and prepped.) Roofs were usually constructed with the gable-ends on the sides of a two-slope roof, with pairs of rafters lap-jointed or mortised together at the roof-ridge, at about a 45-degree angle. Long laths or slats run cross-ways between the rafters. Most log houses were roofed with cut shingles. Porches and sheds attached at a later date would usually have a shallower roof line, described as a “witches’ hat” in silhouette.

Doors and windows were cut in the walls after basic construction was completed. They were neither large nor numerous, since cutting them weakened the structure. The carpenters would set wedges into the spaces between the logs to prevent them sagging, and cut vertically until the desired size was reached. Then a door or window frame of planks would be nailed or pegged into place to stabilize the cut logs. Another reason for having a minimum of windows in many parts of Texas, especially in the early days was the ever-present danger of Indian attacks. A number of houses from that time actually had so-called shooting holes, two or three in each wall. Windows were secured with wooden shutters; before glass was available, the window opening were filled with oiled paper or thin-scraped oiled rawhide, which admitted some light.

In all but a handful of log houses made from carefully fitted hewn timbers, there was a gap between each log which needed to be filled in order to make the house weather-tight. Since so many houses would have been built with new timber it was necessary to allow for shrinkage and warping, as well as the natural taper of the logs. The gaps might be filled with thin slats nailed or driven into place, flat pieces of stone and mortar, or clay mixed with animal hair, straw, or moss – or just plain mud. In a house built of logs which had been roughly hewn, bark left on the top and bottom helped the chinking material adhere to the rough surface in between logs.

About the most common floor plans for log houses in Texas was called a “dog-trot,” or “dog-run”; two single-pen rooms with a covered but open breezeway in between. Sometimes each room had it’s own fireplace; but many house built after the Civil War did not have fireplaces at all, since metal stoves had become so widely available for heating and cooking. Quite a few houses originally built with fireplaces were retrofitted with stoves and the chimneys and fireplaces removed. Larger windows were cut when glass became cheaper and more widely available.

In later years, many log houses were added onto, or covered with siding; after all, there was a whiff of poverty attached to living in such a house and sometimes it is hard to tell, at a casual glance, that there is a log house underneath the siding and plaster, the porch added at the front, and the shed kitchen on the back. Keeping this book in mind, I have spotted old log houses lurking in many places – even in suburban San Antonio – and often, still in use as residences, altho often they have been added onto since they were first built.