There is a lot of discussion going on in the press about the decline of the PC. Per this article by Gartner:

Worldwide PC shipments dropped to 76 million units in the second quarter of 2013, a 10.9 percent decrease from the same period last year, according to preliminary results by Gartner, Inc. This marks the fifth consecutive quarter of declining shipments, which is the longest duration of decline in the PC market’s history.

From my own experience, my PC (which I use for work and applications that I’ve traditionally run on Windows) just gets more and more annoying by the day. 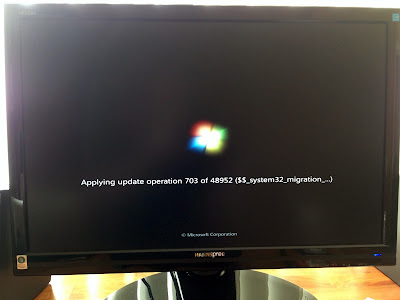 My house has a MacBook Pro, 2 PC’s, an iPhone, an iPad, and a Blackberry (still). The problem is that the PC seems interminable to setup and run, with myriad anti virus upgrades, system upgrades, and the like, and a generally long and painful startup. The perception of the problem is made even worse in that if you don’t run it every day, the updates pile up and it takes even LONGER to get started on the machine.

Meanwhile you just walk up to the MacBook and turn it on, and it’s up. My Macbook is great when you are on wifi and it has smooth typing and a great experience. It also connects to my Samsung TV through Thunderbolt for watching the web up there which is another benefit.

Then you have the iPad, with which I bought an attached keyboard / cover, which turns on in an instant and works anywhere via my cell plan, even if not on wifi. The data plan is pretty cheap and if you use it all up (which you might on vacation or if you are working remotely a lot), you can just buy more for $12.99 and not worry about crazy overcharges. Dan’s got an Android phone and Android tablet which he loves and I assume are just as good (or in some ways better) than the Apple products but I’m satisfied enough to stick with what I’ve got.

One device I am definitely thinking about buying is a Google ChromeBook PC, which runs a version of the Android OS but on dedicated hardware. You can buy one of these for $250, and versions even come with built in cellular, like an iPad. The Google Chrome PC lets you do a bit of stuff locally but mainly relies on the cloud for everything, which has a hosts of advantages from security to rapid start-up and some disadvantages including printing and other mundane items that you take for granted with a typical machine. This seems like something I should buy if for no other reason than to learn more about it.

As you start looking at the Chromebook, Mac and PC you start to think about – what does an operating system do, and how should it be configured? The guys at Google are definitely way, way ahead if you think about security – the system automatically upgrades and if it sees a problem it re-installs. The downside is the need for an internet (or 3G) connection. The Mac is in the middle, and the PC is in the wasteland. When my PC starts to die (it is a Vista PC I upgraded to Windows 7) I’ll have to think long and hard about whether I replace it, at all. MS Office works on the MAC and for 99% of documents I can get them in PDF or machine readable form for my iPad or likely Chromebook by then. Quicken / Turbo Tax are the last holdouts and it probably will be in the cloud by then anyways (reliably, at least) and accessible by Mac devices as well. Intuit for some reason has hesitated to support the Mac platform but it seems like they’ll need to go cloud in a big way or risk becoming irrelevant for home users.