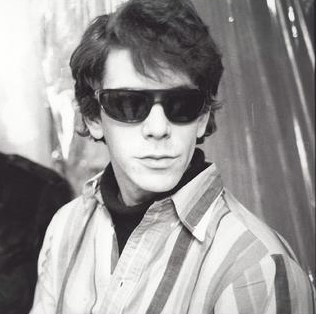 I was a little bit shocked to hear Lou Reed was dead. 71 is not old these days. I knew he’d had surgery recently, but since I hadn’t seen further news, I assumed he was doing OK. Yet another musical hero gone.

The Velvet Underground meant a lot to me, so I will put up a few words here.

I was a fan of sixties rock’n’roll and first wave punk rock as a teenager. This was pre-internet. You found out about things via college radio or some musical publication, like Trouser Press, Boston Rock, Subway News, Goldmine, Creem. But you could not just find any song, any time, the way you can now. It was a universe of scarcity, in a way that people already have forgotten and cannot imagine.

One name that kept coming up as semi-legendary precursors of punk rock, as a dark doppleganger to sixties rock was The Velvet Underground. I was on the look out for them, but I had not actually heard anything them by the time I got to college in 1981.

There was a guy in the dorm who had all their records. He was gay. He made a half-hearted pass at me. I told him that was just not my thing — but I loved him for his record collection! Which was true. And I am forever grateful to him for his generosity with the music he had accumulated. I got my Velvets fix from him.

I bought all the albums, too, starting with the first. I listened to The Velvet Underground and Nico over and over again.

The Velvet Underground became a brooding musical omnipresence over my young adult life, and to a nontrivial degree over the rest of it as well, so far.

With the arrival of the Internet, various Velvet Underground bootlegs, which were fantastic rarities in the vinyl era, became available. I had this to say on the blog:

The various live bootlegs are simply mind-blowing. These guys were so in the pocket it is like they are all one group-mind, a single organism. They were not only ahead of their time, no one has ever really sounded like them before or after. Sterling Morrison said somewhere that the Velvet Underground were ten times better live than on record. I think that is right, and the bootlegs show that even more than the “official” live albums, as good as those are.

I was referring to this song, I’m Not A Young Man Anymore.

Discovery of these bootlegs has been a great pleasure in recent years. These bootlegs are the secret crown jewels of rock’n’roll.

The Velvet Underground have not lost their power to blow me away.

With this kind of music, you either hear it or you don’t. One friend had a cassette I sent him the Summer after our first year of college. There was a song on there by the Velvets, I Heard Her Call My Name, which is a storm of dissonance, with a catchy pop sung buried deep in the din. He listened to it once and couldn’t stand it. Then one day right before school started again he put it on … . And he HEARD it. And he became devotee from that day on. Sometimes it happens that way. It is like love at first sight.

Thank you Lou, for everything.

Thank you also to John Cale, Maureen Tucker, Doug Yule, the late Sterling Morrison, and of course, to Nico, for making the Velvet Underground the timeless and deathless phenomenon it is and always will be.