The NY Times recently had an article about the high levels of pollution in India’s capital city, Delhi.

Beijing’s air pollution has reached such toxic levels recently that the Chinese government is finally acknowledging the problem – and acting on it. But in New Delhi on Thursday, air pollution levels far exceeded those in Beijing, only without any government acknowledgement or action.

When I was in India in late 2012 I too was overwhelmed and amazed by the level of smog and pollution in the capital. When you blew your nose, particulate matter came out in your snot. This photo taken below is out the window of our tour bus and you could not see large office buildings along the roadside a few hundred feet away. 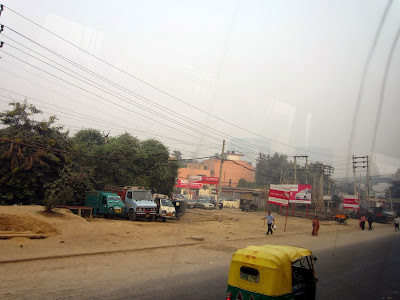 The tuk-tuk in the photo (it is a three wheeled semi-motorcycle used as a taxi) is green and yellow because those are the official colors of vehicles using CNG, designed to reduce pollution, which are also used for city buses. Unfortunately the streets are clogged with traditional gas powered vehicles and myriad ancient looking diesel trucks which more than make up the difference.

While US greens worry about our pollution levels, they are not even measurable when compared to China and India. China recently surpassed the US as the world’s largest car market in terms of annual sales and India is growing rapidly. China and India also continue to invest in coal power and many of their industrial and power-producing facilities spew far more particulate than the US equivalents (although it is hard to measure since the EPA has effectively banned most new coal construction, so it is all natural gas for incremental power units, with some windmills and solar to appease the greens).

It is important to realize that any sort of battle on the environment or pollution would need to be fought not in the US or developing counties, but in India, China and the developing world. It should be noted that these countries have opted out of limits and treaties and seem to be indifferent to levels of pollution and disruption that US citizens would not tolerate for a minute.

As far as Europe, it is effectively being de-industrialized anyways by various socialistic and green policies and will have their current difficulties magnified if the Euro depreciates against the dollar, causing them to pay even more for imported fuel. The US now enjoys the huge benefits of basically being self sufficient in natural gas and oil and many other critical minerals and foodstuffs, which in turn benefits our currency since we don’t have to send as much overseas for oil and have it recycled in their investments in our debt. So soon they will have their wind farms and extremely high electricity prices which they then can pass on to tourists because they will be bringing the hard currency anyways.

The greens effectively won in Europe, de-industrializing them, but don’t even have a chance in India and China, where the health of citizens is far below keeping the current politicians in power (India) and economic growth and wealth (China). In the US we have reached an uneasy balance due to the shale gas revolution (done completely independent of the US government) which allows us another course for manufacturing, heating and power.

7 thoughts on “Pollution In India”