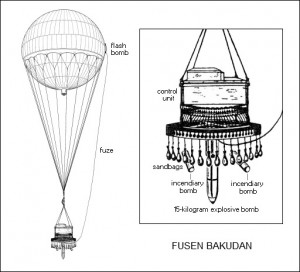 An detailed drawing of one of the 9,000 Fusen Bakudan Balloon Bombs launched by Japan at the United States in the winter of 1944-45. It is estimated that 1,000 reached the USA. It is well known that one such device killed six picnicers in Oregon in May 1945. Less well know is that in March 1945 the power lines to the Hanford Washington nuclear reservation was struck, This shut down the nuclear reactor making Plutonium for the “Fat Man” nuclear device that destroyed Nagasaki, Japan.