UPDATE #2: Investor’s Business Daily agrees about the best response to the Russian invasion of Crimea.

Russia’s economy is barely growing and is increasingly dependent on energy production. Oil and gas account for more than half of Russia’s federal tax revenues and about 75% of total exports. Three-fourths of natural gas shipments go to Europe. Europe is dependent on Russia, but the tables are starting to turn.

UPDATE: Michael Totten has an update on Crimea.

The new ruler is a former gangster whose street name was “Goblin.”

Lawmakers were summoned, stripped of their cellphones as they entered the chamber. The Crimean media was banished. Then, behind closed doors, Crimea’s government was dismissed and a new one formed, with Sergey Akysonov, head of the Russian Unity party, installed as Crimea’s new premier.

It if was a crime, it was just the beginning. Akysonov’s ascent to power at the point of a gun presaged all that has happened since — the announcement of a referendum on Crimean independence and the slow, methodical fanning out of Russian forces throughout the peninsula, ostensibly to protect Russians here from a threat no one can seem to find.

But here’s the most interesting bit: Aksyonov’s sudden rise as Moscow’s crucial point man in Crimea has revived simmering allegations of an underworld past going back to the lawless 1990s, when Akysonov is said to have gone by the street name “Goblin,” a lieutenant in the Crimean crime syndicate Salem.

Putin is dealing from a weak hand but Germany was near bankruptcy when Hitler invaded Poland. Holman Jenkins at WSJ, has a nice summary of where we are.

He is not going to try to annex the eastern Ukraine where Russian speakers are alleged to be crying for rescue from The Ukraine.

He is even using fake videos like the Palestinians have done before to make his argument. The Russian speakers are not buying.

The Russian speakers are only about 17% of the whole Ukraine population. 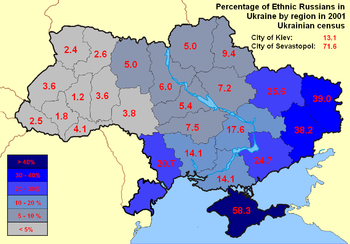 They are concentrated in the eastern portions which are also the poorest and least productive. Ukraine could do without them except for the precedent set.

Western leaders are a risk-averse, short-term-minded lot, but if their decisions are dictated by a conviction of Mr. Putin’s iron grip on Russia, they make a mistake. Many sanguine voices, in fact, already note how the U.S. shale revolution has weakened Mr. Putin’s hand. If Western leaders were so inclined, they might surprise themselves at how vulnerable Mr. Putin’s petro-dependency makes him.

Ukraine has signed contracts with western oil firms to explore what seems to be a large area of oil shale. This is a big threat to Russia’s sole export and prop of its declining economy.

Withdraw Europe’s support for pipelines Mr. Putin wants to build. These, by way of the Black Sea and the Baltic Sea, aim to reduce Ukraine’s leverage as transit path for gas exports that generate much of his regime’s income. Mr. Putin might like to shut off the gas but he can’t. He needs the money.

Let Exxon and other Western oil firms queuing up to explore Siberia and Russia’s Arctic know their efforts are not currently appreciated. A single caustic hearing on Capitol Hill should do it.

They could do as well in Ukraine.

Ukraine, with its control of strategic pipelines, moving toward energy independence and even energy competition with Russia (it recently signed shale deals with Shell and Chevron ) was not acceptable.

Most of all, “Putin lost Ukraine” would have been a powerful meme in the hands of his enemies, who are numerous and don’t actually care about Ukraine.

The West followed down his path, which bears passing resemblance to the petro-regime of Saddam Hussein, because Russia has nuclear weapons and Mr. Putin seemed preferable to chaos. The West may eventually get chaos anyway. Secretary of State John Kerry managed to put his finger on a truth. Mr. Putin knows no more about the true sources of 21st-century wealth and power than a swordfish knows about macramé. No, the Cold War is not returning. Russia does not have the heft to sustain a Cold War even against placid Europeans or a strategically listless President Obama. His current Western enablers just hope Mr. Putin self-destructs on somebody else’s watch.

The Russian speakers in east Ukraine are not convinced this is the right course.

But in Monday’s survey, 82% of his party’s loyalists rejected any such generosity. Even the adherents of the Communist Party, who tend to feel entitled to all of Russia’s former Soviet domains, said with a broad majority — 62% — that Russia should not jump into Ukraine’s internal crisis.

Putin’s captive media in Russia can convince Russians in Russia that the west was behind the coup in Ukraine.

Moreover, 45% blamed western influence for bringing people on to the streets of Kiev, where the “Euromaidan” protests that were originally in favour of further European integration later turned into a general condemnation of the corrupt regime.

The results are still in doubt.

37 thoughts on “Putin, Crimea and Ukraine”