Today I watched the movie “The Grand Budapest Hotel” by Wes Anderson. While the movie was not intended to be an historical record, in some ways a fictionalized representation of life in the 1930’s and early 1940’s is a better way to humanize the elements of the conflict that can be lost broader sweep of the cataclysmic events known to all. The movie also works to include the postwar elements and even the post-communist years into a long a complicated narrative.

After the movie was done I started explaining how I saw the movie to fellow movie-goers and, to them, I almost seemed like the narrator that the movie didn’t include. I just overlaid my own understanding of the participants in that era and, since it is fiction, my own interpretation is likely as sound as anyone else’s.

I will try to limit the “spoilers” in this post and recommend that anyone interested in Zweig (to whom the movie was dedicated) and / or that era in history go to see the movie. You have to be a fan of the Wes Anderson style of movies and his set pieces are clearly not supposed to be realistic but they are tools for great visual cues and inspired situations.

The protagonist in the movie, Ray Fiennes, plays a concierge for a major hotel in the capital city of a declining empire in the 1930’s as war time approaches. He mainly seduces older women but also is open to other sorts of encounters with men. Ray is plainly an intellectual and stickler for protocol and process in an era where that is reaching the end of the line. He and his fellow concierges represent the type of society that Zweig would fondly recognize (as does the process-following attorney who runs into serious trouble later).

The country could be an Austria or Czech type republic that is about to be swallowed by Germany. The borders are in the process of being closed to adjacent countries due to political challenges and incipient war. In an early scene, soldiers in grey accost and check the papers of the concierge and his “lobby boy” (who is non-white and obviously from one of the provinces) on a train and start to beat them up when they are stopped by Edward Norton, who plays an aristocratic officer who recognizes the concierge. To me this officer clearly represented the orderly and (relatively) law abiding German army. He even wrote a note giving safe passage to the lobby boy.

In the early scenes the soldiers are in Grey and when they stop the train their have early model armored cars. They are not intended to be realistic per se but they seem like vintage 1930 era inspired vehicles.

During the contesting of the will, a lawyer who also represents the old era brings a process and fairness to the executor’s role (along with a Kafka-esque level of bureaucratic documents) until he meets up with a thug in a black trench coat who clearly represents the evolving SS. That individual, played by Willem Defoe, engages in more and more grotesque crimes throughout the movie and is not impeded by morals or the rule of law. At one point the Edward Norton character orders the civilian Dafoe away from an investigation that Norton is running, but it is clear that Dafoe is not intimidated and is part of the (hyper violent and aggressive) new order.

Later the protagonist against the concierge is seen to be in a long leather coat and is obviously a civilian leader of the Nazis. They have 2 letter flags and armbands in the SS “style” but the movie does abstract them so as to not be completely blatant. The hotel becomes a barracks for the military regime, and the standards of the staff decline as the hotel is militarized.

When the train is stopped again later in the film the “death squads” are taunted by the concierge with results that are far less pleasant than the early encounter with Norton. The soldiers in black and the more sinister looking hulking vehicles (which seem to be gun mounted half tracks) are also in black and this clearly represents the SS militarized and not the old nobility-led military.

The movie also works in the post communist collapse as the hotel is seen in a very sad and pathetic state in the late 1980’s. The standards have completely collapsed as the last tenants are isolated in a way of life that has vanished.

For a fictional movie that is not intended to be a “literal” story, they managed to work in and include many key elements of the horrors of the 1930’s – 1940’s and the end of the era that it represented. It could be a great way to get kids of non-historically inclined individuals to get interested in what happened in those awful years.

Also included was the Funicolare, a fictional tram leading to the hotel, which does exist in a relatively similar format in Budapest today. Here is a photo of the line to enter the one I rode in Bergen in 2011. 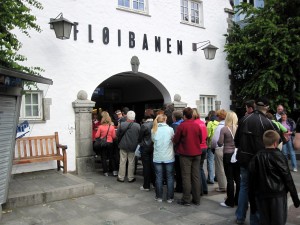 4 thoughts on “The “Grand Budapest Hotel” and History”