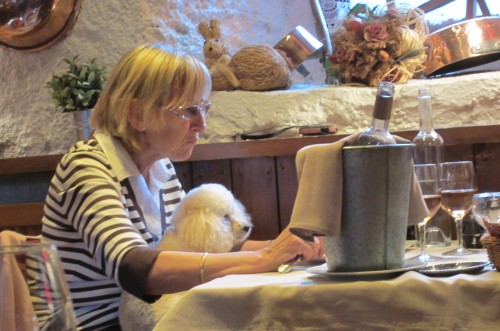 I love a lot of things about France, and the food is probably one of the things I love the most. The French, at most restaurants that aren’t fast food joints, take their time eating and put all that they can into making their meals taste great and look great. Even when I dined at lower end establishments, they did whatever they could with what they had to make some sort of artistry on the plate. They just appreciate it more than having meat, veggie and potatoes all separate with a hunk of parsley as plate filler like we do in the states.

I am not saying that once in a while I don’t like a great steakhouse and/or ‘Mercun style meal. I do. I am saying that I prefer to take more time, relax and enjoy the artistry of a meal.

One thing I really hate about restaurants in France (at least in the south of France where I have cycled the last four years) is that they all let dogs in. Bars too. At first I thought it was novel and cute, but that wore off rather quickly. Most of the time I see the dogs under tables. This scene above from a few weeks ago made my skin crawl.