When I was interviewing for my first job I had a chance to visit IBM in Burlington, Vermont. At the time IBM had a large contingent of workers and management staff at that location. On an unrelated note, IBM still has about 4000 workers in the state, and recently offered a company $1B TO TAKE THEM OFF THEIR HANDS. To confirm, they were willing to sell this business for negative one billion dollars (to quote Dr. Evil). And the sad thing is that the “buying” company wanted IBM to PAY THEM two billion, so they rejected the “offer”. Read about it here.

I had been on a plane maybe once or twice previously and was completely clueless about what to do. I packed my bags and took a cab to the hotel. In the morning, before my interview, I got into the shower and turned on the water. I did not think to check what the temperature was before I got into the shower and it happened to be set on a scalding level; I ended up falling back out of the shower, grabbing the curtain on the way down, and scattering the shower curtain rings throughout the bathroom. I wasn’t seriously hurt. To this day I always check the shower temperature while standing outside the shower stall (or tub) and I only go in when it is at an appropriate level.

The day started out on an ignominious note (with the shower incident) and the interviews were a disaster. I think we ended the day with a discussion that maybe someday I would at least utilize IBM equipment (they were primarily a manufacturing company at that time) since it seemed obvious that I wouldn’t get a job offer in Vermont.

What I remember most of all was the endless sea of desks. IBM had workers that manually calculated their managerial accounting reports and they sat in a giant room that seemed to go on for infinity. I don’t have a photo but in my head it looks something like this… 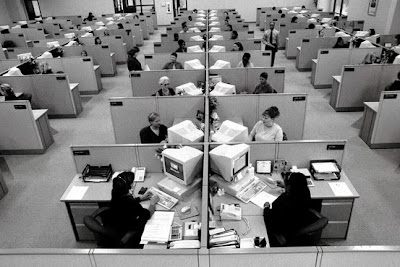 When people gnash their teeth over job losses for some reason they always bypass accountants. Managerial accounting work used to be done by hand, with hundreds of individuals using whatever computational tools were available (the accountants drove the use of the first mainframes and tabulating machines, for example) to create the reports that were used to manage our pre-internet economy. When I was at IBM I gazed out at the (modern looking) cube farm that did all of this (semi) manual work. Today, of course, these jobs are long gone.

My first job was in auditing. When we prepared annual reports for small governmental entities, we wrote up the financial statements BY HAND and took them over to the typing pool. The ladies (they were all women) would look to see if they could find the template from the prior year’s audit. If not, they would manually type the financial statements including all the notes and all the numbers (in column). They weren’t typewriters, but they were early generation computers that were sort of dumb terminals. At least they didn’t have to use white out.

When the reports came out, you had to manually check every word and every letter and every number on every page. It was very tedious. After the report was completed, you had to “page” through every copy when they produced them to make sure all the pages were bound together (it wasn’t as thorough, but it still took a while). You had to re-check every column and re-total them because this was long before the days of spreadsheets.

Rarely do you hear anyone lamenting all of the lost jobs from accountants and typists doing manual work before computers were widespread but it was a bloodbath.

8 thoughts on “25 Stories About Work – Lost Productivity and Typing”