Obama has announced that he will not only end the trade embargo with Cuba but establish full diplomatic relations.

President Obama, as he has shown all year, isn’t about to go quietly into the lame-duck night, even with Republicans ready to take full power down the street. With the stunning announcement Wednesday that the United States is set to normalize relations with Cuba, the president is closing his self-termed “Year of Action” with a thunderclap.

In doing so, Obama is serving notice to new Senate Majority Leader Mitch McConnell that a sitting president trumps a Congress divided both along party lines and within them. The shift comes about a month after the last time the president thrust his stick into the GOP’s eye, when Obama announced he was unilaterally providing widespread deportation relief to as many as 5 million illegal immigrants.

I have no objection to ending the embargo, which has been mostly symbolic for years.

Diplomatic relations is another matter.

Even the Argentine Pope is involved apparently. Certainly, there is no reason why the Pope should recognize real democracy and freedom after a lifetime in Argentina.

Whether any of this will influence the station of the Cuban people is doubtful.

A full end to the US trade embargo of Cuba would require legislation in Congress, something for which there has been virtually no appetite until now, but the White House hopes that by using a series of executive actions to minimise its enforcement, it can provide a breakthrough that will encourage political reform in Cuba and soften political opposition in the US.

A recent view of Cuba is available from Michael Totten and it is not optimistic about Cuban freedom.

I had to stay off their radar. Freedom House ranks Cuba as the sixth worst country in the entire world for journalists. The Castro government creates a more hostile working environment than even the Syrian and Iranian governments. The only countries on earth that repress reporters more ruthlessly are, in order, North Korea, Turkmenistan, Uzbekistan, Eritrea, and Belarus. All are either communist or post-communist in-name-only.

Some of my colleagues in the media weren’t sure I’d get away with it. “You’re pretty high profile,” said one. “And it’s not like you can hide.”

Several who have worked in Cuba in the past warned me not to bring a laptop. “That alone will be a red flag,” said one. “They’ll put you under surveillance.”

You don’t just fly into Cuba and start interviewing the locals.

The regime is that much more decrepit with the absence of Daddy Warbucks in Moscow. The things you will most love about Cuba, I bet, are the Cubans and the ravaged beauty of the place. I can’t imagine any people on earth putting up with such bullshit with as much grace and humor and decency as the Cubans have managed, God love ‘em. Were it not for the regime I’d happily live in Havana.”

Of course, Obama plans to help them out with US aid but Congress may have more to say about that.

Every Cuban, regardless of how content they may appear, lives with two underlying things—sadness and fear, the latter being more prevalent. Most Cubans will not openly display it as you are a foreigner, but read between the lines when they speak to you.”

I know what it’s like to wear a false face. Not only did I have to lie at the airport, I had to conceal my identity from every single person I met in the country, including other Americans, lest someone say the wrong thing about me in public in front of the wrong person at the wrong time. I vowed to myself before I even left the United States that I wouldn’t tell a single human being in Cuba who I am or what I was doing no matter how much I felt like I trusted them. I hated having to do that, and I felt a little self-loathing because of it, but I had to be careful and consoled myself with the fact that I could be honest about everything later in writing.

Cuba is a police state on a par with North Korea. Cuban intelligence has been running our Cuba policy for many years.

“The Cuban government has eyes and ears everywhere,” he told an audience at the American Enterprise Institute in Washington. “If it was that easy to recruit Ana Montes, then we have to assume they have recruited others.”

Carmichael said his experience looking for Cuban spies within the DIA led him to believe that Cuba today has “a stable of agents” within the U.S. intelligence community and elsewhere in government. “The danger is that the information [they gather] will be shared with Iran or wherever our forces are today,” he added.

Carmichael called Montes the “Queen of Cuba” because of her unprecedented penetration of the U.S. intelligence community and her impact on U.S. government policy toward Cuba.

Not only did she have access to the most secret, compartmented intelligence programs aimed at Castro and his regime. But as the intelligence community’s top Cuba analyst, Montes helped to craft virtually every major classified analysis on Cuba, including key National Intelligence Estimates.

Under Montes’s guidance, the Cuba NIE’s instructed policy-makers that Castro’s regime posed no threat to the United States and was not seeking to extend its influence to other countries in the Western hemisphere.

Whether this is still case is unknowable but, considering who runs our government and the State Department, I would say yes.

The Cuban embargo began in retaliation for expropriation of US assets and the assets of the Cuban middle class who mostly decamped to the US over the years. Those who left early were lucky. Others, not so much. It, our relationship with Cuba and Castro, began with the support of the Eisenhower Administration.

Just months after he seized power in Cuba, Fidel Castro visited Washington in April 1959. He placed a wreath at the base of both the Lincoln and Jefferson memorials and was photographed looking up in seeming admiration of both U.S. presidents.

For U.S.-Cuba relations, it was all downhill after that.

Che Guevara was already executing thousands of Cubans during this “honeymoon period.” Michael Totten has a few things to add about Guevara, as well.

“Just as Jacobin Paris had Louis Antoine de Saint-Just,” wrote French historian Pascal Fontaine, “revolutionary Havana had Che Guevara, a Latin American version of Nechaev, the nineteenth century nihilist terrorist who inspired Dostoevsky’s The Devils. As Guevara wrote to a friend in 1957, ‘My ideological training means that I am one of those people who believe that the solution to the world’s problems is to be found behind the Iron Curtain.’…He was a great admirer of the Cultural Revolution [in China]. According to Regis Debray, ‘It was he and not Fidel who in 1960 invented Cuba’s first corrective work camp,’ or what the Americans would call a slave labor camp and the Russians called the gulag.”

The adulation that he has enjoyed is incomprehensible except as an example of propaganda and stupidity. Even the returned hostage, Gross is seen with his lawyers who are apparently admirers of Guevara. 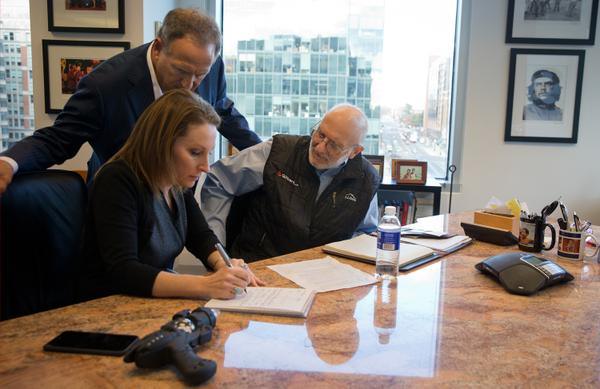 Guevara is the enduring image of Cuba and radical chic, even more than Castro.