The Washington Post is worried that the “Islamic State is failing as a state.”

Services are collapsing, prices are soaring, and medicines are scarce in towns and cities across the “caliphate” proclaimed in Iraq and Syria by the Islamic State, residents say, belying the group’s boasts that it is delivering a model form of governance for Muslims.

The Muslims have never been much at governing. In the early days after Muhammed and his nomadic warriors conquered much of the Middle East, the people pretty much governed themselves as the Arabs were better at fighting than governing.

Although the Abbasids had failed to prepare for the invasion, the Caliph believed that Baghdad could not fall to invading forces and refused to surrender. Hulagu subsequently besieged the city, which surrendered after 12 days. During the next week, the Mongols sacked Baghdad, committing numerous atrocities and destroying the Abbasids’ vast libraries, including the House of Wisdom. The Mongols executed Al-Musta’sim and massacred many residents of the city, which was left greatly depopulated.

The Golden Age of Islam had been chiefly carried out by Christians and recent converts (mostly involuntary) who translated Greek classics into Arabic. It was mostly a fiction created in the 19th century.

The metaphor of a golden age begins to be applied in 19th-century literature about Islamic history, in the context of the western cultural fashion of Orientalism. The author of a Handbook for Travelers in Syria and Palestine in 1868 observed that the most beautiful mosques of Damascus were “like Mohammedanism itself, now rapidly decaying” and relics of “the golden age of Islam”

The government heavily patronized scholars. The money spent on the Translation Movement for some translations is estimated to be equivalent to about twice the annual research budget of the United Kingdom’s Medical Research Council. The best scholars and notable translators, such as Hunayn ibn Ishaq, had salaries that are estimated to be the equivalent of professional athletes today.

A good deal of this is nonsense contrived by later “Orientalists” who glorified the barbarian Arabs and their Muslim rulers.

The use of paper spread from China into Muslim regions in the eighth century, arriving in Al-Andalus on the Iberian peninsula, present-day Spain in the 10th century. It was easier to manufacture than parchment, less likely to crack than papyrus, and could absorb ink, making it difficult to erase and ideal for keeping records. Islamic paper makers devised assembly-line methods of hand-copying manuscripts to turn out editions far larger than any available in Europe for centuries. It was from these countries that the rest of the world learned to make paper from linen.

Due to religious qualms, Sultan Bayezid II and successors prohibited printing in Arabic script in the Ottoman empire from 1483 on penalty of death, but printing in other scripts was done by Jews as well as the Greek and Armenian communities (1515 Saloniki, 1554 Bursa (Adrianople), 1552 Belgrade, 1658 Smyrna). In 1727, Sultan Achmed III gave his permission for the establishment of the first legal print house for printing secular works in Arabic script (religious publications still remained forbidden), but printing activities did not really take off until the 19th century.

It has become politically popular to exaggerate the Muslim world’s role.

“Nothing in Europe,” notes Jamil Ragep, a professor of the history of science at the University of Oklahoma, “could hold a candle to what was going on in the Islamic world until about 1600.” Algebra, algorithm, alchemy, alcohol, alkali, nadir, zenith, coffee, and lemon: these words all derive from Arabic, reflecting Islam’s contribution to the West. 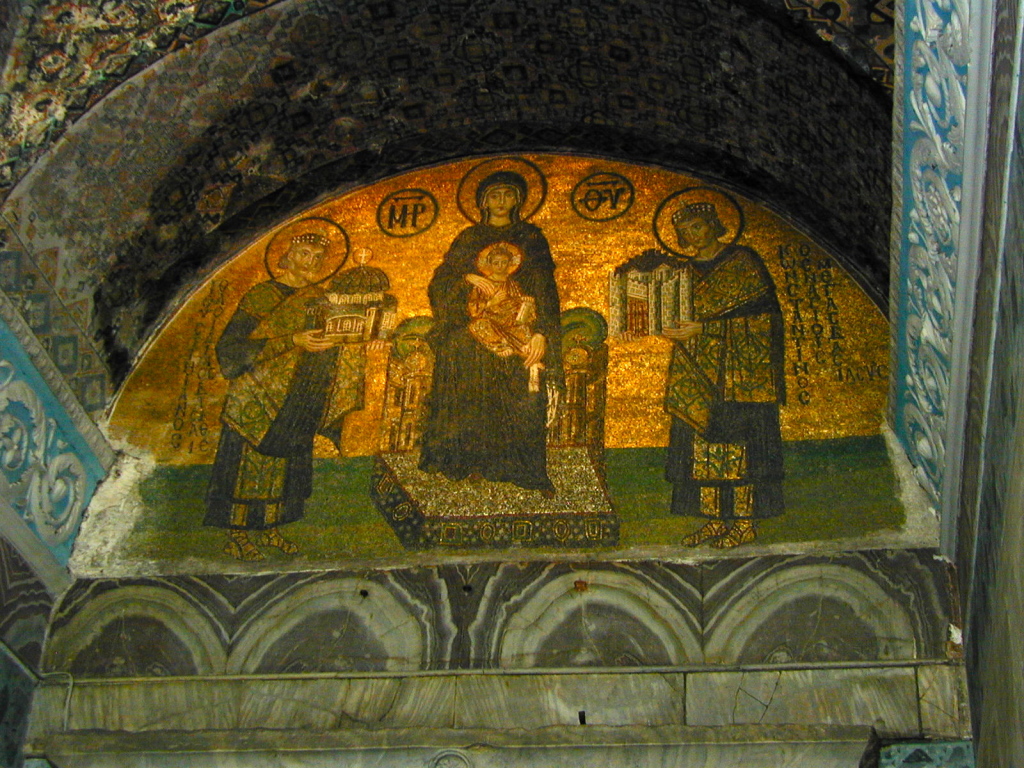 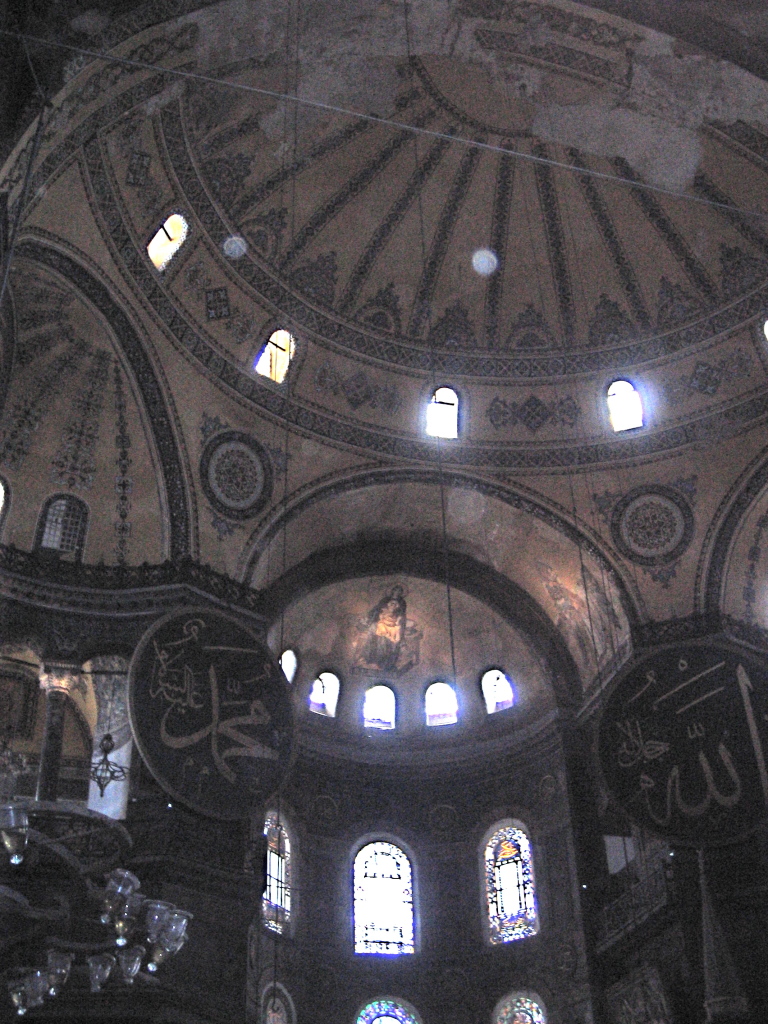 When I visited Hagia Sophia, Constantine’s great Christian cathedral in Istanbul, the church, which had been a mosque since the fall of Constantinople, was being converted to a museum and the great panels of Quran calligraphy that covered the original mosaics of Christian scenes were being taken down. 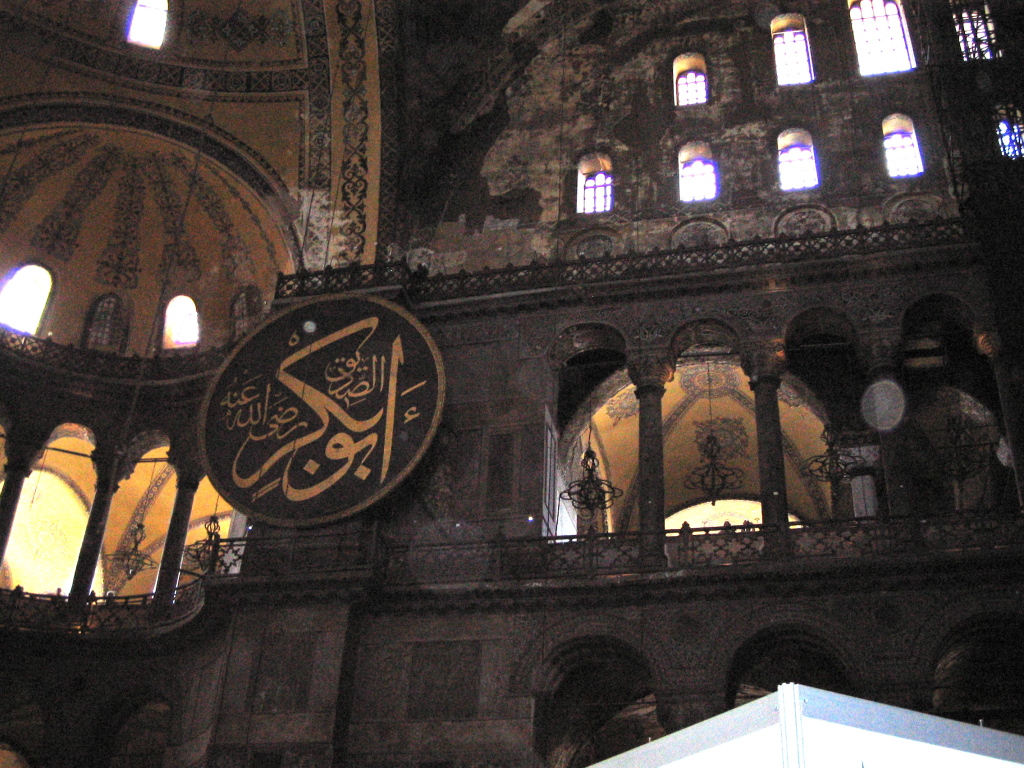 The workmen taking down those panels found that the mosaics beneath had been carefully preserved by the workmen who had erected the panels after 1453 and protected from harm. It seems apparent that those workmen, no doubt reluctant converts to Islam, hoped for a restoration after reconquest.

The Greeks of the middle east came to be known as “Levantines,” which was a term of derision as they worked for the Muslim conquerers.

When the United Kingdom took over the southern portion of Ottoman Syria in the aftermath of the First World War, some of the new rulers adapted the term “Levantine” pejoratively to refer to inhabitants of mixed Arab and European descent and to Europeans (usually French, Italian or Greek) who had assimilated and adopted local dress and customs.

Without the Levantine Greeks and Italians to run things, the Turks could not have maintained their empire. They even kidnapped Christian children, especially from the Serbs, and called them “Janissaries,” or “New Soldiers.” The Janissaries ran the empire for the Turkish Sultans.

Some historians such as Patrick Kinross date the formation of the Janissaries to around 1365, during the rule of Orhan’s son Murad I, the first sultan of the Ottoman Empire. The Janissaries became the first Ottoman standing army, replacing forces that mostly consisted of tribal warriors (ghazis) whose loyalty and morale were not always guaranteed.

Even then, the Muslims could not rule themselves without the conquered people. Why should anyone be surprised that the barbarians (The Greeks term for the residents of the middle east) are unable to govern ? They are excellent killers and do rape and pillage well.

More on “The Caliphate”: In the Iraqi city of Mosul, the water has become undrinkable because supplies of chlorine have dried up, said a journalist living there, who spoke on the condition of anonymity to protect his safety. Hepatitis is spreading, and flour is becoming scarce, he said. “Life in the city is nearly dead, and it is as though we are living in a giant prison,” he said.

Aside from the plight of the residents, abandoned by Obama, I see little reason to intervene. Iran is the enemy. Syria and the ISIS crowd are terrorists and killers. Of course, they are getting some outside help.

Much of the assistance that is being provided comes from Western aid agencies, which discreetly continue to help areas of Syria under Islamic State control. The United States funds health-care clinics and provides blankets, plastic sheeting and other items to help the neediest citizens weather the winter, a U.S. official said, speaking on the condition of anonymity because of the sensitivity of the subject.

The Gaza barbarians are not much better at governance and seem to survive on begging from European and US charity in the form of government grants. Islam seems to be surviving on the scraps iof civilization left by the west.

Much of this occurred when the Arab army of Lawrence of Arabia took Damascus. They were unable to operate the city infrastructure and soon left to resume their nomadic ways. The Saudis have operated in this manner since then. They are dependent on their servants and their foreign employees.

39 thoughts on “The new “Islamic State” and its troubles.”