Silicon Valley, and the Techie crowd in general, have a hard time with any history that hasn’t happened in their own lifetime. But the Wired article Instapundit linked too is beyond the pale. Only a Silicon Valley Journalist serving a Silicon Valley cultural audience can say something as historically ignorant as this —

“…You see, we’re already at the dawn of the age of killer robots. And we’re completely unprepared for them.
.
It’s early days still. Korea’s Dodam systems, for example, builds an autonomous robotic turret called the Super aEgis II. It uses thermal cameras and laser range finders to identify and attack targets up to 3 kilometers away. And the US is reportedly experimenting with autonomous missile systems.”

…with a straight face in the earnest pursuit of eyeballs.

Sadly, Instapundit fell for WIRED writer Robert McMillan’s repetition of Silicon Valley hype about “Autonomous Killing Machines.” and sent Wired an undeserved “Insta-lanch” instead of the “Fisking” it so richly deserved for this piece of historically ignorant/arrogant Silicon Valley Marketing fluff. (Admittedly the killer robot cartoon was retro-cute).

General Gabriel Rains of the American Union Army killed his first Confederate cavalryman with a pressure fused land mine in 1862. Current American land mines are a lot smarter “Autonomous Killing Machines” and include weapons like the M93 Hornet for tank killing and the M7 Spider for hunting — quite literally — men.

The second most numerous kind of “Autonomous Killing Machines.” are familiar to readers of my History Friday Column on the hugely successful American military sea mining of Imperial Japan in WW2. The first practical naval mine was invented by American David Bushnell in the 1780s, for use against the British in the American War of Independence.

Far fewer people are aware of how close a Nazi Secret Weapon, the then “high tech” magnetic influence sea mine, came to defeating Great Britain in the first six months of World War II (WW2). The whole story of the German Navy’s secret wartime research into a magnetically sensor triggered “Autonomous Killing Machine,” how close that “Autonomous Killing Machine“ came to winning WW2 for Hitler and what the British Royal Navy did to defeat them, which was laid out chronically in the BBC series “The Secret War, Episode 5 – The Deadly Waves” in the Early 1970s. See below —

The third type of centuries old “Autonomous Killing Machine” are self-propelled naval torpedoes. The first Whitehead torpedo dates from 1866. According to Wikipedia:

“This early torpedo proved itself in combat during the Russo-Turkish War when, on January 16, 1878, the Turkish ship Intibah was sunk by Russian torpedo boats carrying Whiteheads.[2]and killed its first warship, the Turkish ship.”

The autonomous homing variety of Whitehead torpedo, which are more accurately described as “Killer robots” in that they are “unleashed” rather than fired dates from 1943…

…when the Germans and Allied deployed them within months of each other.

The T5, called GNAT, or German Naval Acoustic Torpedo by the Allies, was referred the “Zaunkoenig” (Wren) by the Germans. Its acoustic detector guided the torpedo to the loudest sound which was usually a ship’s propeller. The “Zaunkoenig” ran at 24 knots for 5,700 meters. It had a combined contact and magnetic fused detonating pistol whose magnetic sensor was prone to premature detonation. As a homing weapon, its acoustic homing sensor was only effective if the target was traveling between 12 and 19 knots. This eliminated it as an anti-merchant ship weapon, however it made it highly effective against escorting warships making high speed depth charge attacks.

U-boat fired T5 “Zaunkoenig” sank both HMS POLYANTHUS K47 and HMS ITCHEN K227 21/22 Sept 1943 with nearly complete loss of crews while they were escorting Convoy ON202.

The Allies were very much competitive with the Germans in this regard fielding the Mark 24 “FIDO” Mine, AKA Acoustic Homing Torpedo in 1943.

The Mark 24 was a very small anti-submarine homing torpedo. Also known as a “Mine” (for deception purposes) or “Fido” (a nick name) its homing guidance was by four crystal hydrophones arranged around the body. This simple guidance system, like that of the T5, steered towards the loudest noise. Anti-sub patrol aircraft launch parameters for FIDO were 125 knots from 250 feet (76 m).

The FIDO was followed by the Mark 27 “Cutie,” which was a Mark 24 that had been modified for submarine launching in a 21-inch submerged torpedo tube by the addition of wood guides mounted on the torpedo’s outer shell. Like the T5, it was a intended for self-defense against convoy escorts.

Decades later, more advanced homing torpedoes were turned into the MK 60 Encapsulated Torpedo (CAPTOR). It was a killer robot that hunted Soviet Submarines and it was a keystone of 1980s American naval strategy against the Soviet submarine fleet world wide.

Heck, even that bête noire of the “Ban Killer Robots” arms control movement — the Autonomous AI Killer UAV Swarm — is older than most of the targeted demographics of WIRED MAGAZINE.

One of the nice things about playing the various board and electronic versions of Larry Bond’s HARPOON naval wargame is that it teaches you about things like the Autonomous AI Swarming capabilities of Soviet P-700 Granit (NATO Code Name SS-N-19) anti-ship cruise missile.

As Wikipedia puts it —

The missile, when fired in a swarm (group of 4–8) has a unique guidance mode. One of the weapons climbs to a higher altitude and designates targets while the others attack. The missile responsible for target designation climbs in short pop-ups, so as to be harder to intercept. The missiles are linked by data connections, forming a network. If the designating missile is destroyed the next missile will rise to assume its purpose. Missiles are able to differentiate targets, detect groups and prioritize targets automatically using information gathered during flight and types of ships and battle formations pre-programmed in an onboard computer. They will attack targets in order of priority, highest to lowest: after destroying the first target, any remaining missiles will attack the next prioritized target.[5][6] Such description received some doubts.[7] The missile has a means of countering the attacking anti-missiles. Also, onboard computer has data to counter the enemy’s electronic warfare and tactics of evasion from the fire of air defense.[8]

The P-700 Granit deployed initially aboard the cruiser Soviet nuclear powered battlecruiser Kirov (now the Admiral Ushakov) in 1980 and the missile entered general service after that test cruise on 19 July 1983.

Taken as a whole, this is three full Star Trek: The Next Generation Face Palms, one for the Silicon Valley firm Clearpath Robotics, one for McMillan the reporter and one for Instapundit.

Unfortunately, while "ignorant" and "journalist" go together these days, this WIRED article was so above and beyond normal levels of ignorance. Face Palm.

Clearpath Robotics arms control posturing is quaint and like a buggy whip…decades out of date with little relevance to the post-modern world. Face Palm.

But, darn in, Glenn. We military affairs bloggers expect more from you than linking to such drivel. Face Palm 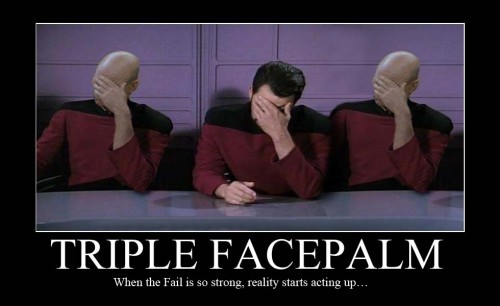 7 thoughts on “When Instapundit Earns a Face Palm…”