I am an enormous fan of “top lists” and almost any sort of categorization. If it is the top 100 guitarists, the greatest bands, a type of warship, or anything else – I like to see it in a category and classification that can explain trends and try to cut through complexity by organizing the data into different groupings.

Sirius XM radio stations are a great example of categorizations. Recently on a trip with Dan and our friend Brian we had the station stuck on “Hair Nation” – and then we started thinking through the different stations and how Sirius has chosen to allocate music across each of them.

Some bands are solidly “Hair Nation” – Poison, Warrant, LA Guns, and everything else with spiky hair and all about having a good time. While Dan is more “Hair Nation” – I am more on the “Boneyard” station, which has a big overlap with Hair Nation but a whole host of songs that aren’t on Hair Nation, such as UFO and older heavy metal like Judas Priest. 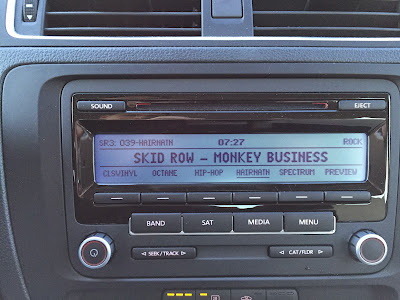 We started to have a mock “debate” in a snooty English style of “Dear Sir – I beg to differ with your classification of the band Skid Row. “Monkey Business” is more of a hard Boneyard song while their ballads of course could reside properly within the confines of Hair Nation.”

One item that is sad for me is when a genre gets “closed”. Some genres are closed specifically on the basis of time – “90’s at 9” (meaning channel 9) obviously selects only songs from the 1990’s, so that station is pre-defined. On the other hand, if Poison put out a new album (CD? Stream?) tomorrow, it belongs on Hair Nation. I don’t listen to Hair Nation enough but I figure that “the door is always open” for Poison’s return over there. On Boneyard I did hear the new Black Sabbath album 13 when it came out so I know that someone cracked open the heavy vault for some new music over there.

In the otherwise excellent book “Louder than Hell” which carefully walks through a history of heavy metal and its various sub-genres, the author explicitly stays away from the band Alice In Chains (except to mention a show that they opened for another band where someone threw bottles of urine at them) because they are likely classified as “grunge” (the Lithium channel in Sirius XM terms) when to all who understand heavy metal they are definitely a heavy metal band. They have long hair, loud and down-tuned guitars, and rock anthems that we’ve all heard for 20+ years (damn I am getting old). In fact, if I could take 1-5 albums on a desert isle, “Dirt” would make the list – with the blistering start of “Dem Bones” “Dam that River” and “Rain When I Die” starting off with 3 punches to the face and capped off with “Would” and “Rooster”. However, the author took the (probably technically correct) path of not classifying Alice in Chains as “Heavy Metal” for various reasons and in the end it just doesn’t make sense to me personally. However, the fact that I am worked up of what is the most minor of minor things just shows how I am a demented fan of categorization and how it re-shapes history and frames our points of reference. What if 1000 years from now someone is trying to re-construct the history of heavy metal and they don’t know about Alice in Chains just because they wore flannel? Now that’s a damn shame.

4 thoughts on “Our Need For Categorization”