“Drugs, Inc.” is a television show on the National Geographic Channel that focuses on the business of drugs, from producers to traffickers to users to police. I can’t recommend this show enough and I watch every episode that comes up on my DVR.

Welcome to the $300 billion industry of Drugs, Inc., where traffickers pocket huge profits, addicts become chained in a vicious cycle and law enforces wage war across diverse battlefields – farmers’ fields, shady labs, urban street corners and suburban schools. How does this business work? Can it be stopped or should it be regulated? What impact does it have on those it touches?

Drugs Inc somehow gets interviews with drug dealers and drug traffickers. They are always wearing a mask of some sort and often their voices are garbled electronically. It isn’t clear to me why they agree to be on TV or why the authorities don’t follow up on the leads from the program or subpoena their records. I can’t comment on the authenticity but it certainly seems real, especially the interviews with the users or “fiends” as they are described by the dealers on the series.

The first thing that the show will do for you is change how you look at homeless people. All of the users on the show are either 1) drug dealers themselves likely far down the chain in order to support their habit 2) panhandlers or some sort of schemer / prostitute. There occasionally are recreational users or those with jobs but since they typically interview hard-core drug users many of those individuals can’t do a regular 9 to 5 job. 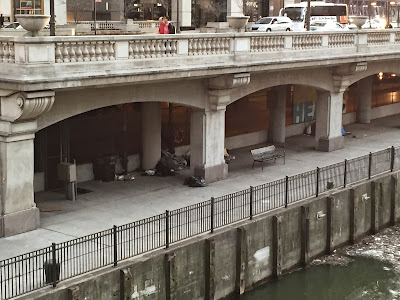 The panhandlers are a relentless lot. They wake up in various places, sometimes in their cars, sometimes in a tent, sometimes in an abandoned building, or elsewhere. When they get up, it is time to make some money in order to buy some drugs. They always know exactly what they are doing and have a target amount of money to “earn” in order to score what they need to stave off dope sickness.

When they hit their target number, they either hit a drug house (or “trap” in the lingo) or call / text their dealer and start off on the trek to obtain the drugs. Then the show follows the user as they go into a public toilet or an alley or a house somewhere and shoot up (for heroin). I usually look away as they do the drugs because it can be gruesome especially for long time users where they can’t find a vein anymore. One of the prostitutes spent over an hour looking for a spot that worked (per the show) and another prostitute lamented when she had to use a vein on her forehead because it hurt her earning power.

For a bit right after they get their “hit” the panhandlers / prostitutes are momentarily happy and lucid. Often they lament their state and say that this helps take the pain away from their predicament. They might say that once they did well in school or had a wife and a family but now they are a strung-out junkie and they can’t believe that their life ended up like this.

One element of the show that is particularly noteworthy is that there isn’t usually the typical “story arc” of 1) have a problem 2) struggle to overcome the problem 3) leave on a note of happy resolution. In Hawaii they followed a crystal meth user who lived at home with his mom; the previous day he tried to hang himself. They interviewed him the next day and he stole his mom’s car and sold it for cash to pay for meth. And that’s the end of the show. Another time they interviewed a male prostitute who ran out of money and had been off drugs for 4 days, long enough that he was no longer very sick. He scored some money and talked to the interviewer about how he ought to just get out of there and get his life together but instead he was going to take this money, find his dealer, and get some drugs. And that’s what he did.

You will also gain a deep appreciation for the bloodthirsty efficiency of the Mexican drug cartels. These cartels have apparently cornered the US market on many types of drugs and operate an enormous network of Mexican nationals across the USA. They interview many individuals associated with the market and they routinely make comments like “a woman trafficker was talking about quitting so they pulled her out of the car and cut her head off right in front of me” or “If my drug shipments keep getting intercepted they will kill me”. Several of the episodes were in Mexico and they interviewed a drug enforcer with an assault rifle who was heading out to eliminate someone that the cartel wanted dead and he said he had killed many with that gun. It seemed very real. The police that they interviewed also had praise for the power of the cartels and their ability to isolate the local dealers into “cells” and keep all parts of their chain (from supply to trafficking to dealing to money laundering) apart from one another so it was very difficult for the police to get individuals to “flip” and go higher up the chain of command.

I highly recommend this show and think it represents great journalism. Their reporters are on helicopters in the jungle raiding poppy fields and in the most dangerous neighborhoods in the USA talking to drug dealers and users. However they get this show done, I don’t always understand, but it is always riveting.

19 thoughts on ““Drugs, Inc.” – the Most Important Show on Television”