I grew up in a Chicago neighborhood called South Shore. At that time, 1943 to 1956, it was one of the nicest parts of the city. Now, now, it is a cesspool of crime.

When my father moved us to the house at 7344 Paxton Avenue, I was 6 years old. The area was quiet and peaceful. Not far away was South Shore Country Club, a beautiful club that offered golf, skeet shooting and a horseback riding to members. 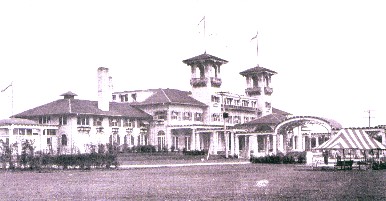 It was a elegant place and I visited a few times but we were not eligible for membership because my father was in the business of owning and repairing juke boxes. That was not a respectable enough occupation. Prosperity was not the criterion. Los Angeles County Club has barred people from the entertainment business for the same reasons.

Our home had been built in 1912 and still had gas lighting fittings in the bathroom and living room, as electrical lighting was still a bit suspect. 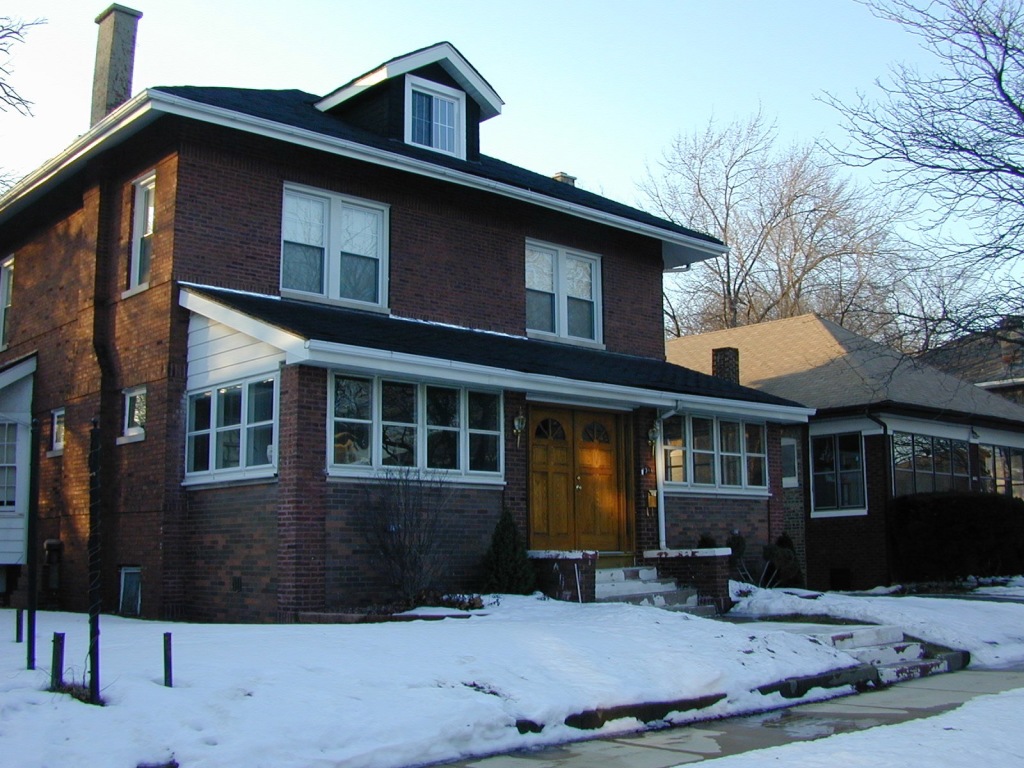 This is the house many years after we were gone. It has had the front porch enclosed in brick. Otherwise, it looks much the same. The owner saw me taking a photo and came out to ask me who I was. He insisted on showing me through the house which has had some interior remodeling. He asked if I could send him photos of what it looked like when we lived there but most of my old pictures are home movies.

When I went to school, I began at a Catholic school near our then home on Clyde Avenue. It was the school affiliated with Our Lady of Peace parish. 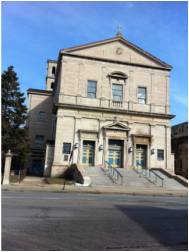 This is the church that faces 79th street. We moved in 1944 to a new home, the one pictured above.

It was located at 7344 South Paxton Avenue. 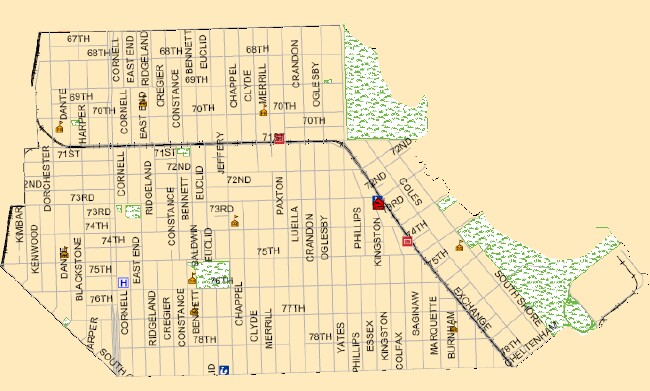 The intersection of 74th and Paxton can be clearly seen in the map as well as the proximity of the lake.

The house, itself had a finished basement party room which was actively used when I was small. When the war ended with VJ Day, my parents had a party that lasted three days. When each of the men came home from the war, they would hold a party for him and any of his buddies that came along. 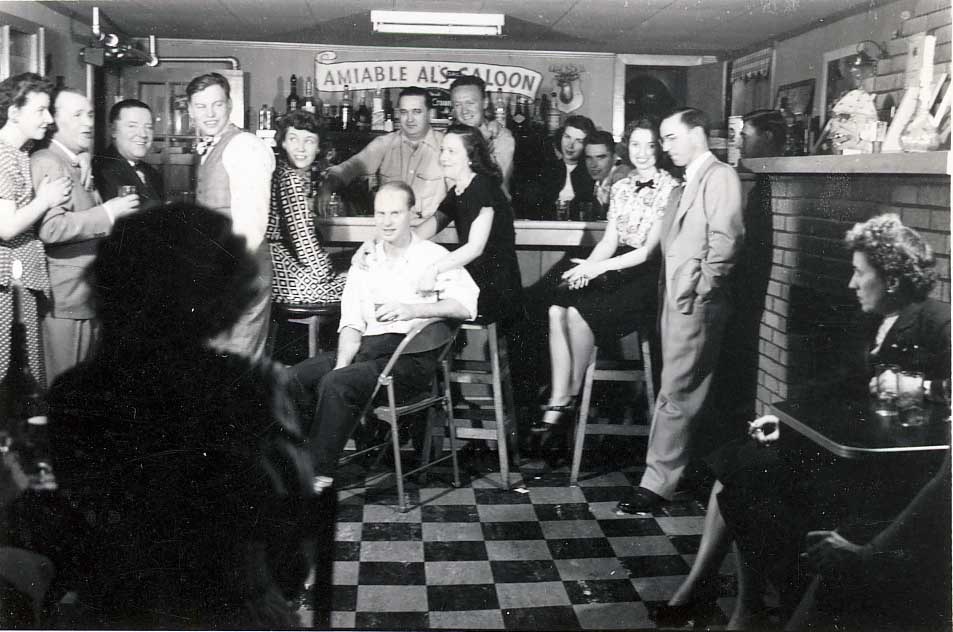 This is an example of one of those parties. There was a wet bar and the back bar had a banner that said “Amiable Al’s Saloon.” There were quite a few marriages that resulted from those parties as my cousin Bud Kerrison had two pretty sisters and they had many pretty girlfriends. My mother stayed in touch with some of those couples for many years.

The fireplace at the right was built by my father and my uncle Art Kerrison. It was too deep because, when they began, they did not realize that the foundation was built as a pyramid with the outer wall sloping out to nearly 6 feet thick at the floor level. I’m sure this was a way of dealing with the soft wet soil. I could dig in the backyard as a child and hit water at about four feet. The entire neighborhood was reclaimed swamp. The result of this discovery was that the fireplace ended up too deep and smoked. In the house photo, the chimney can be seen going up the left side of the house.

In the party photo, my father is standing behind the bar and my uncle Tom, his brother, is standing just by the fireplace with his wife Mavis. My aunt Leona is seen sitting to the right at one of the tables. To the left in the doorway, are standing Paul Jacobson, a friend and Jack Creighton, one of my father’s oldest friends.

Standing next to Paul is Bernice Klingon, the wife of my father’s other best friend, Cliff. Seated in the folding chair is Sid White, who spent part of the war in a German POW camp after his B 17 was shot down. I believe his wife, Ellen is next to him. Behind the bar to the right in the photo is Bud Kerrison (Art Jr) and Pat Neary, one of Marion and Ruth’s friends, who would marry Frank Flanagan after meeting him at one of those parties. The party room was also used for family events, like birthdays. Standing next to my father is Chuck Quinn who lived down the street and had spent the war in the South Pacific with Bud (Victor Jr) Gonya, who would marry my cousin Ruth about four years later. “Bud” was a very common nickname for men who were juniors at that time. 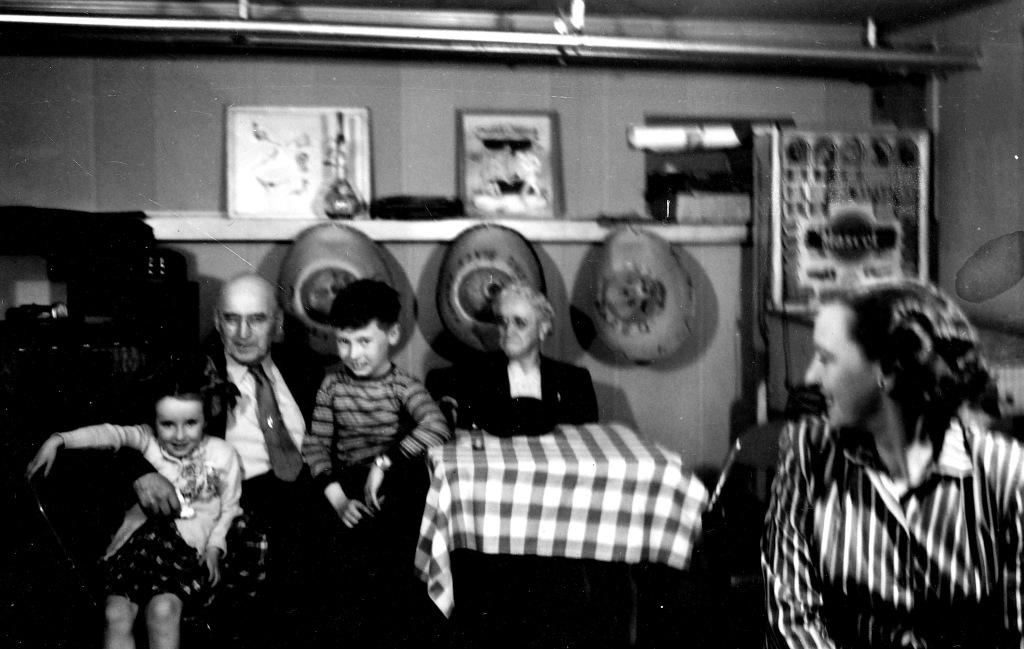 Here is another view of the room, looking toward the back of the house. The bar was in the front. Here are my grandfather and grandmother with my sister Patty and me on their laps. Sitting to the right is a family friend, Blanche Lomas whose husband Chuck was my father’s friend and who enjoyed playing practical jokes on me at times. The jukebox is to the left of the photo and a pin ball machine is to the right. Both were popular with my friends as I grew older. We even had a penny slot machine on the bar for a while. I wish I had it now.

The Mexican straw sombreros were there for years. Looking at the ages of Patty and me, this was probably taken about 1946 when I would be 8 and she would be 5.

The house had a nice big backyard, which is seen here with Jack Creighton holding up my oldest son Mike in 1965, twenty years later. The back of the house shows a “sun porch” that was to the rear of the large living room. Above that is a balcony that opens from a bedroom. 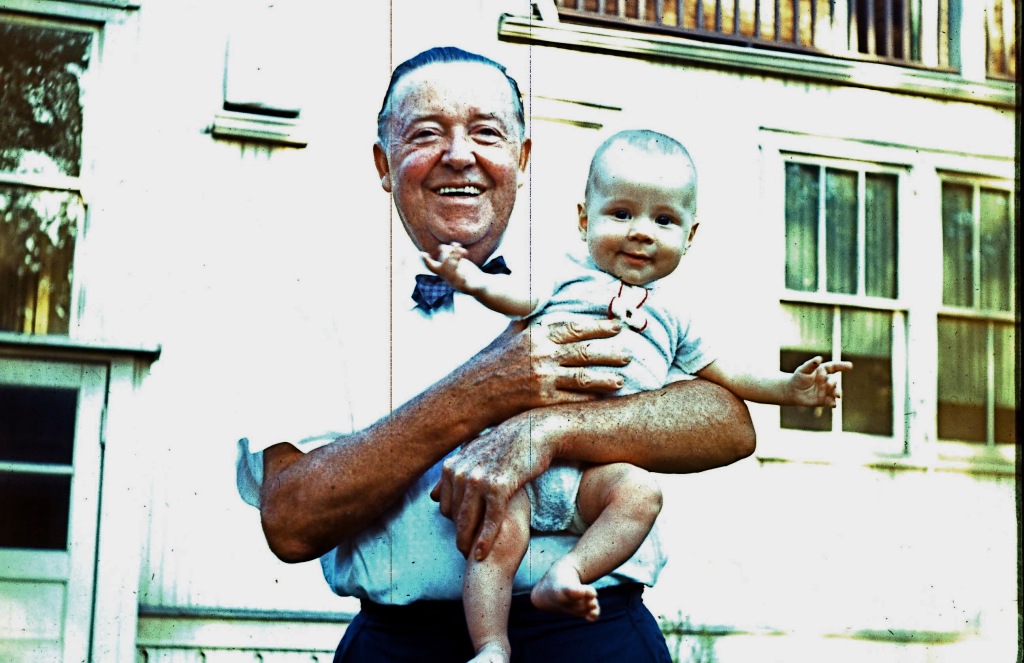 By 1965, the neighborhood was starting to deteriorate and my father was forced to move a couple of year later. It was a shame and I would be interested in owning that house today but not in that area. The present description bears no similarity to what I remember.

The South Shore community has experienced economic decline over the past decade and has not seen much new business growth within its neighborhood. Many new residents from many of the city’s former public housing structures and from further south within the city have resided within South Shore because of its unique location and accessibility to major roadways such as Lake Shore Drive. Crime and gang-related activities continue to plague the community, and safety remains a major concern amongst its residents.

The list of former residents includes Michelle Obama who grew up a half block from my parents’ home but long after we had all left.

The church I attended, St Philip Neri , Would have made a nice cathedral and was the richest parish in the city. The pastor, Monsignor Parker, had been an accountant before he became a priest and he was so successful that the Cardinal, Samuel Stritch, gave him the Illinois #1 license plate for his limousine. We would see him every day. He was elderly by that time but was well known as a business master. 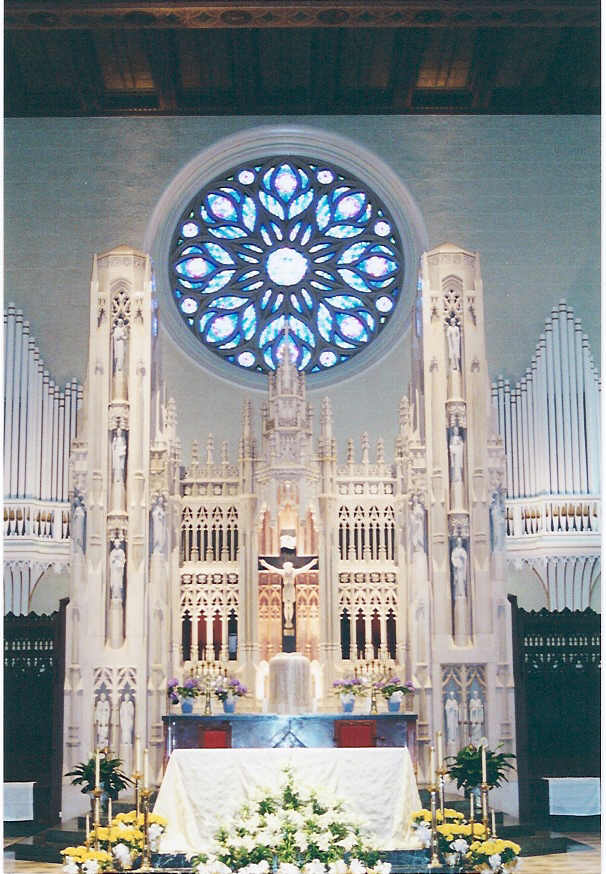 The altar is magnificent and the Christmas display included life sized figures in the creshe. I do contribute to my old elementary school at St Philip Neri School but it is a losing battle, I fear. I did attend the 50th reunion of my 8th grade class in 2002. I am more enthusiastic in contributing to my high school, St Leo Catholic High School, Which seems to be doing well. Their college acceptance rate is higher than it was when I graduated.

One unfortunate consequence of Monsignor Parker’s business success was that St Philip’s loaned money to other parishes and, when the mortgages came due, it lost huge amounts to default by failing parishes. It should have been financially secure, even if the congregation was no longer prosperous. I find it hard to forgive the Church for failing the black community which needs Catholic education whether vouchers are available or not. The public schools are half the problem with the black community in the cities. 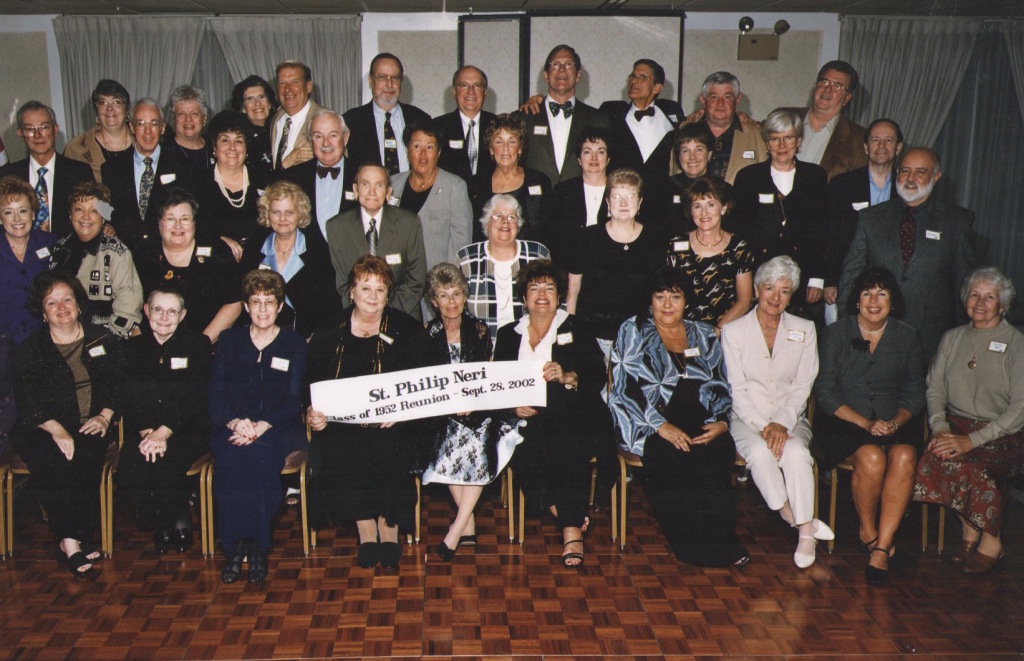 A good time was had by all although several were ill and died soon after the reunion.