The Daughter Unit and I were watching Northern Exposure

this week, and I had an errant thought; what would a town like Cecily be like, if it were in South Texas? A charming and quirky place, full of slightly skewed, interesting people, with an eccentric history all it’s own. And before long, we had come up with Luna City, Texas, and a whole long cast of characters, drawn from people we know, or have met, and little towns that we have visited, or know about. Eventually, this will be another book. It seems to me at times like this, with news of horrific or distressing events arriving in wholesale lots … well, a bit of mental refuge might be in order. If such is not to your taste, or seems terribly frivolous … well, then skip over to the next post.) 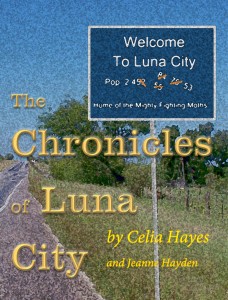 The little town of Luna City is not a city at all, as most people understand these things. It is a small Texas town grown from a single stone house built by an immigrant Bohemian stone-mason in 1857, at a place where an old road between San Antonio, Beeville and points south forded a shallow stretch of river. The railway was supposed to come through where Luna City would be – and the city fathers confidently expected it to become the county seat. Alas, when Dr. Stephen Wyler’s great-aunt Bessie eloped with a smooth-talking engineer on the Galveston, Harrisburg and San Antonio Railway, her father – who owned much of the land in the district – was furious. The railway, he stormed, was an invitation to vice and debauchery of every kind, a threat to the virtue of young women and girls – and so he saw that it never came to Luna City; although there had been a generous space allotted in early plans of Luna City for the usual magnificent Beaux Arts-style county courthouse in the square at the center of town. That expectation also came to naught; the county seat stayed in Karnesville, and since then, Luna City has made very little effort to attract the casual tourist.

Travelers on the farm-to-market road going north or south will pass by the Tip-Top Ice House, Grocery and Gas, perhaps note the four-square house of limestone blocks owned by the last descendant of Arthur Wells McAllister – the surveyor who first drew up the plat of Luna City in 1876, and drive on. They might also note the metal towers, ladders and chutes of Bodie Feed & Seed Supply, looming on the distant horizon – but definitely will miss the disintegrating sign advertising the Age of Aquarius Campground and Goat Farm. Anyone looking for that establishment already knows where it is … and that clothing there is optional. Jess Abernathy, who does the finances for Sefton and Judy Grant has mentioned to them now and again, that they ought to get a new sign or have the old one repainted and repaired, but Sefton and Judy aren’t into the realities of advertising and commerce in this … or really, any age. This exasperates Jess, but then she is the fifth generation of a Luna family with commerce bred into their bones and blood; her father and grandfather run Abernathy Hardware, housed for all this century, every decade of the previous and fifteen years of the one before that in a looming Victorian commercial building on Town Square with a cornice which looks as if it is about to topple over onto the sidewalk below.

Sefton and Judy arrived sometime in the summer of 1968 in a colorful cavalcade of carefree spirits intending to establish a communal farm; forty-five years later, they are the only members of it who remain. Odd as it may seem at first or even second glance, they are valued members of the community. They set up in Town Square every Saturday morning, under the biggest of the oak trees, and sell vegetables – which are sometimes a slow-seller, because in Luna City, most residents have a vegetable garden themselves – but also eggs, honey, home-made goat-milk cheeses, herbs, and hand-made soap. The Grant’s vegetable patch has the advantage of deep and rich soil on the bank of the river, and generous applications of well-cured compost seasoned with goat-manure. A single disintegrating Airstream trailer is still parked there in the field which is supposed to be the campground, a relic of the past. Sometimes a relatively broke or undiscriminating traveler rents it for a couple of days or weeks; the Englishman who manages the Luna City Café and Coffee lived there for six months. Only a few residents of Luna City refer scornfully to the Grant place as Hippie Hollow. Mrs. Sook Walcott is one of these; if Jess Abernathy has commerce in her bones and blood, Sook Walcott has all that, tempered with the acid of pure acquisitive capitalism. The Grants are liked, and Sook Walcott is not … more about that, later.

The tea room and thrift shop housed in the front room of the old McAllister house is open only two days a week, which discourages casual visitors, but not anyone who knows Miss Leticia McAllister; the last woman in this part of the world who always wears a hat and gloves when she leaves the house, not just for early Sunday services at the Episcopal church. The formidable Leticia McAllister – always known as Miss Letty, even during those decades when she taught first grade in the Luna City Elementary school – is notoriously impatient, especially of anything reputed to be humorous. On the occasion of the centenary of Luna City, Miss Letty and her older brother, Doctor Douglas McAllister (the doctorate was in history, which he taught at a private university in San Antonio) compiled a commemorative volume of local history, gleaned from the memories of the oldest residents; scandals, shenanigans both political and sexual, the last gunfight in Luna City (which happened in front of the Luna Café and Coffee) old feuds and new, controversies over every imaginable small-town issue – it’s all there in A Brief History of Luna City, Texas, published privately in San Antonio, 1976, price $18.25 plus sales tax. The Luna Café & Coffee still has a small and dusty stack of them behind the cash register counter – although the manager/chef at the Luna Café & Coffee has no idea of what they are or what to do with them. Where he comes from, a hundred years is practically yesterday. Miss Letty’s erratically-open tea room also has a couple of boxes in inventory. Dr. McAllister, whose puckish sense of humor was not appreciated by his sister, was dissuaded from titling it “A Hundred Years of Lunacy in South Texas” on the very fair grounds that other places possessed a history every bit as scandalous, and that it would somehow encourage local residents to be called Lunatics, rather than Luna-ites … and that simply would not do at all.

Luna City, you will gather from this short introduction, does not discourage visitors, exactly; but neither does it welcome them effusively. Luna-ites prefer to take a quiet measure of such visitors who do venture into the heart of downtown, and treat them with exquisite Texas courtesy. Those who choose to remain longer than a quiet stroll around the square or stop for a lunch at the Luna Café & Coffee – never doubt their welcome. And if they fall under the spell, and stay , within four or five years, they are as established and respected as any of the original Luna-ite families … McAllisters, Gonzalez-with-a-z and Gonzales-with-an-s, Abernathy-who runs-the-hardware-store, Wyler-of-the-Lazy-W-Ranch, the Bodies of the feed mill and all the rest. Luna-ites have no urge or need to distain relative newcomers. They know exactly who they are, and do not need proving it to anyone.

21 thoughts on “A Diversion – The Tales of Luna City”