Our building recently upgraded to 100 MB per unit internet using “microwave fixed wireless” rather than the traditional AT&T / Verizon / fiber solution. Here and here I wrote about this incredible technology and its potential to disrupt the cable and internet industries.

After the upgrade we were receiving screaming fast performance from wired connections but slower ping and downloads on my wireless clients. Thus I asked my friend Brian for a wireless router recommendation and he mentioned the TP Link Archer A9

. I picked it up on Amazon for $129 and recently hooked it up. With all the security threats that abound, it is important that you have a modern network router and are aware of weak security points on your network, particularly some of the new “Internet of Things” devices that are proliferating nowadays. 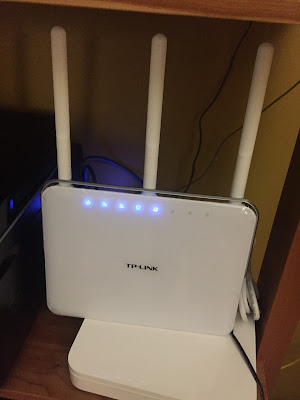 Routers have changed significantly over the last few years in terms of power, capabilities, and ease of use. For instance the A9 has a simple console when you sign in and you can “hover over” and see your wired and wireless connections that are currently on your network. They have a cool error page and I am just starting to dig in to the various errors that I see on the panel and will be working with my ISP to resolve them – these aren’t typical “errors” in that the internet doesn’t work, but I do believe that frequent connections and re-connections and slower link times are caused by these events.

A couple of new technologies that I didn’t have before are the 2G and 5G bands. I did a bit of research and apparently the 5G band is supposed to be faster but the 2G band has longer range. I will be experimenting with this in the future throughout my condo.

The unit also has 3 antennas. I no longer point them all “straight up” – they are now pointed to different corners of my unit. I am still researching to see if the antennas send out both the 2G and 5G bands or if they are sent individually.

You also can set up a “guest network” which is kind of a cool feature. I will look into that in the future, as well. There are a host of security options and I may set up mac address filtering on the main network and then when friends come over I can put them on the guest network; this was a downfall of using mac filtering in the past. Another option is to limit use of the TP Link console just to specific wired machines with dedicated Mac addresses… this is another powerful security option to consider.

One unexpected element is how many wireless devices I have today that need to be reset. For instance I have a weather station that stopped working and also the Philips Hue lighting system which did work since it was connected directly via an ethernet cable. I also have a squeezebox radio that I am thinking of tossing since it is very old and not supported, although it is cool with pandora.

There’s a lot more that I can do with this router, including using it as a print server as well as a backup unit (by connecting a USB hard drive). I will research all of this in my spare time and it is fun to get back into the details of a gadget like this and learn a lot about networking at the same time.

For now I am a bit afraid to update the firmware because I saw their technical forum and noted that someone commented that the firmware “bricked” the unit. For now I will hold off and will just watch the threads there to see how it is going.

If you haven’t picked up a network router in a while it is likely time to do this. The newer devices have a host of additional protections and controls and it is important that you have a strong firewall and controls and know what devices are on your network.

7 thoughts on “Your Evolving Home Network”