Dan and I and Gerry often joke about Midwest drinking and how people from other parts of the country simply have zero concept of what the midwesterner’s relationship with alcohol is like. We often go to sporting events together and watch massive drinking binges playing out to the left and to the right.

Recently I was out in Wrigleyville which is just packed with new bars and drinkers as far as the eye can see. The plaque below was at a bar called “Stretch”. For best results, click on the photo and read the individual “merit badges” that have been earned. 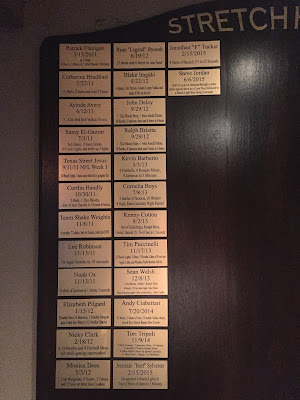 Here are some of the “highlights”

Wow that much alcohol that fast is crazy. Dan and I were at a bar with some of the heaviest drinking I’ve ever seen and some crazy guy tried to buy us all shots of Jagermeister (there were 6 of us standing around) and no one would drink them so he just took all the shots and poured them into 2 regular drinking glasses and downed them in a couple gulps. That was so nuts I had to ask Dan the next day if we really saw it.

This sounds about like “Mayor Daley” the merry idiot immortalized at Drunk Bear Fans. That guy was just probably trying to get loaded before going to a Cubs game. The best part about this is that I’d bet that guy drinks like that all the time and someone just had the foresight to document it for history’s sake. When you are on the clock you need to make the most of it, I guess.

The biggest differences occur when someone from another city is just plunged into the madness that we take for granted here in the midwest. A “normal” citizen who walks into Wrigleyville or game day near Madison or any midwestern city on a Friday night in the summer really can’t believe what is happening and thinks it is something special – it can’t be like this every day, can it? Oh yes it can. We are old now but I saw with my own eyes an entire new drinking class at Wrigleyville last night and they cover most of River North at 2am and beyond.

It is nothing to be proud of but it is reality here. You have to see it to believe it. Or just put up a plaque.