In 2005 HBO released season one of Rome. This is among the best historical dramas I’ve ever seen, possibly the best. The writing is superb, the acting is excellent, the production values top notch, and for the most part it’s historically accurate. Accurate in major events, at least, although the conversation and minutiae are crafted. 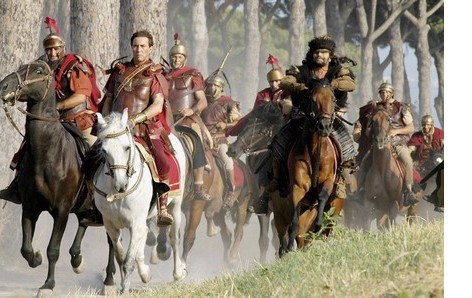 The core of the story is the fall of the republic and the rise of the dictators, and begins with Caesar in Gaul defeating and accepting the surrender of the king of Gauls, and the earliest breaks in Caesar’s relationship with Pompey Magnus, who rules in Rome as Tribune of the Plebes. In the telling, you’re treated to various facets and styles of Roman life, from slaves to senators. This is done through various intertwined subplots that include Caesar’s chief of staff, Marc Antony, Caesar’s longtime lover Servilia, his niece Atia, Atia’s son Octavian, Atia’s daughter Octavia, centurion Lucius Vorenus, his wife Niobe and legionary Titus Pullo. Vorenus and Pullo are fictionalized versions of the only two infantry soldiers mentioned by name in Caesar’s Commentariat. Among his opponents are Pompey Magnus, Cato, Cicero and Scipio.

There’s far less bloodshed than you might expect looking at the cover. There are a few battles but most are covered as before or after, or short scenes from them. The production itself is astonishing. The marketplace of Rome was completely recreated on a multi acre set. Set’s were built for both Atia’s and Servilia’s villas as well as Vorenus’ subura house. The gear the legionaries wore was accurately reproduced. Clothing and writing implements, jewelry, footwear, are all meant to be historically correct. One of the interesting aspects of the Blu-Ray disc is a feature that can be turned on in the setup that pops up little explanatory windows on occasion that explain the subtle facets of life being portrayed; a window explaining the small offering of food that’s made to a statuette or the purpose of a bust of Janus at a celebration.

Another interesting aspect was brought up by one the writers in commentary. He pointed out that we view Roman civilization and culture through the lenses of Judeo-Christian ethics and Enlightenment philosophy. The Romans did not. Theirs was a world that predated those things. Their religious and philosophical world was populated by a pantheon of capricious gods and, to a lesser extent, the philosophy of the Greeks. What was allowed or not allowed was so because the gods allowed it, or willed it. Fortuna was a goddess, and if she smiled on your life you might be rich, otherwise a slave.

In addition, much is made of Caesar’s ability to use and discard people at will, his willingness to sacrifice everything, including virtually his entire fortune at one point, to achieve his goals absolute power. All of the elite of Rome, as portrayed at least, are jockeying for position and power and wealth at every turn. Ambition, the requirements of social position, family expectations, custom, jealousy, and not least revenge and hatred, all play their parts.

All said and done, this is outstanding entertainment. Amazon Prime members can stream the entire thing for free. The DVD set can be had for $16 and the Blu-Ray box set for $35, which is an amazing value for ten hours of top quality movie making. If you buy it, I predict you’ll watch it more than once.

Some clips I’ve picked to give you a flavor:

Here’s Caesar’s powerful niece Atia discussing separating Caesar from his lover Servilia, who Atia sees as a competitor for influence. She has engaged Titus Pullo to teach young Octavian to fight. The relationship between Octavian and Pullo that develops, and the question of who really fathered Vorenus son become points around which later events eventually pivot. So there’s a surprising lot covered in this short clip.

Here, Marc Antony has just returned from Rome, where he was attacked in the Forum by men of Pompey’s political faction. Caesar is camped outside of Italy, just on the other side of the Rubicon. By law, a commander who led troops into Italy without authorization was committing an act of treason, a capital offense. Any legionaries who followed that commander were also guilty of treason. Here, Caesar persuades the Thirteenth Legion to cross the Rubicon with him and take Rome.

Caesar’s Speech to the 13th Legion

Here, Pompey and his faction of the senate and troops loyal to him have fled Rome. Caesar moves in with his troops and declares martial law.