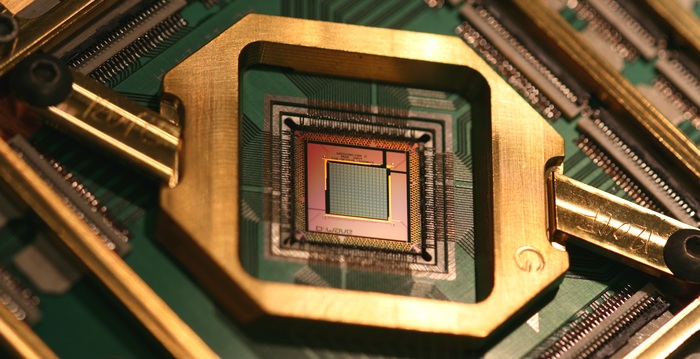 D-Wave Systems, located in British Columbia, is a builder of commercial quantum computers. It stores bits as magnetic directions in one of three states: clockwise, counterclockwise, and both directions simultaneously. The math and physics are far beyond me, but they claim to solve certain sets of optimization problems up to 100,000,000 times faster than classical computers. Customers for their computers, which cost $10 million apiece, include Lockheed Martin, an unnamed intelligence agency (NSA?), Google, JPL and NASA Ames Research.

Applications appear to be computationally intensive problems with lots of variables, and the solution involves a process called quantum annealing, where an optimal approach is found by exploring millions of solutions simultaneously to find the most efficient solution path. I’m reminded of a discussion on the famous double slit experiment, a classic physics experiment that demonstrates photons displaying behaviors of both waves and particles, known as wave-particle duality. Most interesting is that quantum probabilistic behaviors are also observed, in that the experiment functions differently when the particle paths are observed and when they are not. When the photons in the experiment are observed, the probability function collapses and the photons behave like a particles. If they are not observed, the photons take many paths through the slits and create a dispersed pattern on the target. That behavior has been described as “spooky”, because the particles seem to know when they are being observed. Weird, I know. It’s been said that anyone who claims to understand quantum mechanics is lying. But that doesn’t mean we can’t describe its behavior. Richard Feynman explained that at the quantum level, every possible path a photon can take is considered, and the path chosen is a probability function, like a bell curve. As photons are emitted from a source, the most likely path is taken most often, but some photons will take slightly less probable paths, still other even less probable paths, and so on. Quantum annealing seems to be a form of that, where many paths are simultaneously considered until a most probable path emerges, then it is chosen.

What this means, I’m not sure. I think it means more than faster gadgets. The NSA is no doubt applying this to encryption and decryption. NASA AMES and others are applying this to artificial intelligence research. Lockheed could be applying this to problems as diverse as stealth shaping and calculating the highest probable intercept solution of a target in a ballistic missile defense engagement.

At this point, these machines require a low vibration, supercooled, electromagnetic interference free environment. Not something you’re going to put on a ship or spacecraft. A bit like early clocks in that sense. A clearly powerful technology in its infancy. But also clearly a technology with immense implications. What could be done with a technology that brings computing power hundreds of millions times greater than we currently have to your fingertips? How would that change things? How has the world changed since ENIAC was built? It’s an interesting development and I’m glad to see things like this still being built. It’s a good sign for our civilization.