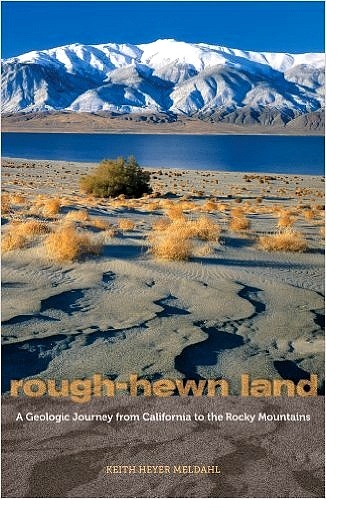 Keith Meldahl, a geologist and professor of geology, has written one of the most interesting books

on the history of the American West I’ve ever encountered. It’s a history of how it got the way it is, physically. He covers the creation of California – it’s only recently been pasted onto North America – how the Sierra Nevada formed and what it actually is, why Nevada looks like it does, how the Colorado Plateau got there, how the Rocky Mountains were formed, and some very interesting and odd details as well. Along the way, he provides a few vignettes of the early explorers and settlers and their often brutal encounters with these features.

Probably the two most important players in all this are something you’ve never heard of, the Farallon Plate, and the North America continent itself. Long story short, 240 million years ago  the world’s landmasses had merged together into single massive conglomeration called Pangea (All Land). Prior to that time, North America had moved West to East, the East coast was the active margin and the West coast, which then ended in a line from Wyoming across Utah and through Nevada, trailed along. The eventual impact with Africa raised the Appalachians to Himalaya scale and merged us to it like India to Asia. By 150 million years ago, Pangea was breaking apart and a newly born mid-ocean ridge opened the Atlantic Ocean for the first time. As the ridge continued to build new seafloor, it spread apart. Everything east of that ridge began being pushed to the east, and everything west of it, including North America, began being pushed to the west. It was then that things began changing for the western states. You can page through that 100 million years at Arcadia Street for a glimpse at the plant and animal life you would have seen, had you been there.

As the continent was pushed westward, it encountered the Farallon Plate on the Pacific seafloor, which folded down into the mantle under the onslaught of the advance of the North American continent. As the plate subducted several things happened.

One, it carried bits of continental land and island chains into the West coast and pasted them on in long strips called ‘exotic accreted terranes’. They’ve been mapped all over the edges of continent, testifying to a long history of plate encounters from various directions. The area of the Great Plains north through central Canada, a region referred to as the continental craton,  seems to be the ancient core of North America and appears to be almost 4 billion years old. Notice, for example, how smooth, flat, and earthquake free that zone is. It is ancient land. There is only one known major fault zone through that area, called the New Madrid Fault. When it is disturbed, and that last happened in 1811, it rang bells in Boston. The crust is solid and unbroken and energy waves travel very long distances through it. Think of a hammer hitting a plate of steel. Earthquakes in the west, even large ones, tend to only be felt locally. That is because The West is broken and shattered from 200 million years of plate tectonics. Think of a hammer hitting a pile of rubble.

Two, the West Coast became volcanically active. When seafloor is carried to a depth of around 100 km (60 miles) it undergoes a pressure and temperature induced transition to a mineral called eclogite. At that point, much of the water in the seafloor is released as a superheated fluid. Some is recycled into the mantle making it less dense, destroying its crystalline structure, and so melting it. This magma then rises as a buoyant fluid, working its way to the surface and erupting as volcanoes. When the water saturated magma nears the low pressure of the surface, the water changes from a fluid to a vapor, causing the magma to burst explosively out on the surface.

The third thing that happened was the most profound. For reasons still debated, the Farallon stopped subducting at the normal angle of about 45 degrees and took on a much more horizontal trajectory. One explanation for this put forth by the author is the subduction of a seafloor plateau, possibly something the size of Texas.  This would make the plate too buoyant to subduct into the mantle, and it would simply slide along underneath the landmass. That caused a whole series of event to occur in succession. First, it cut off the flow of magma to the West Coast volcanic fields. Next, it slid under the Nevada Plano, an uplifted, high plateau region in what is now Nevada. Next, it slid under Arizona/Utah and lifted that entire region about 3,500 meters (about 10,000 feet) straight into the air. That’s as high as a mountain range, hardly even tilting it. Think about the energy required to do that. Next, it impacted the granite basement rocks in Colorado, pushing them up through 30-40 km (20-25 miles) of crust in the granite-cored uplift that are the Rocky Mountains. As an analogy, imagine steel blocks pushing up through the floorboards of your porch, so that the boards lay inclined around and along the core of steel.  Next, as if all that were not enough, as the tail end of the Farallon disappeared under North America the damaged basement rock under the Nevada Plano collapsed and foundered into the mantle collapsing the entire region and forming a vast sunken provence called the Basin and Range, and the the North American component called the Great Basin.

As the Farallon disappeared, the western edge of North America collided with the Pacific Plate, which did not subduct. That plate is moving north. That movement is tearing at the western region and has caused a whole series of changes as well. It has caused the Baja Peninsula to separate, it is also pulling the whole Southwest into a northerly direction even as the continent is pushed west from the Atlantic. The combination is rotating the region clockwise, tearing apart the weakened Basin and Range region, and is tearing off slices of California along the San Andreas and Hayward Faults and sliding them northward up the coast.

Short movie demonstrating the ongoing breakup of the Basin and Range and the strike-slip faulting along California:   Extension in the southern Basin and Range

I’m happy to say that’s not all. I’ve only covered the high points, and if you find the subject interesting I highly recommend this book.  Rough-Hewn Land: A Geologic Journey from California to the Rocky Mountains

8 thoughts on “Rough-Hewn Land: California to the Rocky Mountains”