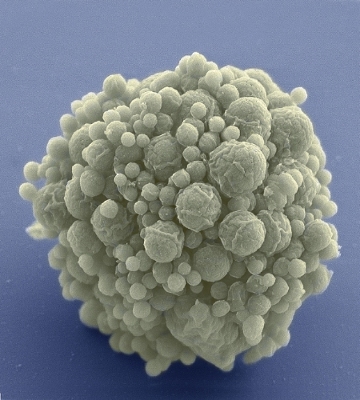 I have previously posted about Venter’s work with synthetic organisms.

While I was digesting this new material, Craig Venter was making the Gene VII book obsolete. He set up a new company to compete with the Human Genome Project The result is well described in The Genome War by James Shreeve who was given access to Venter but less to the government funded project. This year, Venter’s autobiography was published and his plans for the future are described.

The links are at the original article which is from 2007.

Now, his group has progressed to a synthetic bacterium.

Using the first synthetic cell, Mycoplasma mycoides JCVI-syn1.0 (created by this same team in 2010), JCVI-syn3.0 was developed through a design, build, and test process using genes from JCVI-syn1.0. The new minimal synthetic cell contains 531,560 base pairs and just 473 genes, making it the smallest genome of any organism that can be grown in laboratory media. Of these genes 149 are of unknown biological function. By comparison the first synthetic cell, M. mycoides JCVI-syn1.0 has 1.08 million base pairs and 901 genes.

This is huge news and will take years to develop.

The most surprising result of their work—and perhaps the most sobering one for the rest of the field: The team still doesn’t understand what 31 percent of the essential genes do in even the simplest organism, to say nothing of a human genome. It’s a development Venter called “very humbling.”

“We are probably at the 1 percent level in understanding the human genome,” said Clyde Hutchison III, a distinguished professor at the Venter Institute.

That lack of knowledge isn’t standing in the way of entrepreneurs. Biology has been “hot and heavy” since the development of a molecular tool that makes gene editing easy, Hutchison explained. Scientists might be able to remove disease-causing genes or even determine a baby’s eye color. This technology, known as CRISPR/Cas-9, has alarmed many inside and outside the research community, who fear it may be used on the human genome before its effects are understood, with unforeseen results.

If he does another public seminar, I hope my friend Bradley can get me a ticket. I am now reading Lewin’s Genes XI, although he seems to be no longer the editor.

I hope I can wade through it. Sometimes, as knowledge progresses, it becomes simpler. I hope so.

“These cells would be a very, very useful chassis for many industrial applications, from medicine to biochemicals, biofuels, nutrition, and agriculture,” said Dan Gibson, a top scientist at both Venter’s research institute and his company, Synthetic Genomics Inc. Ultimately, the group wants to understand the tiny genetic framework well enough to use it as a biological foundation for more complex organisms that could address many of the world’s ills. Once each essential gene’s function is identified, scientists can build an effective computer model of it; from there, they can simulate how best to go about “adding pathways for the production of useful products,” they wrote.

I will be following this story closely, if I can only understand it.

5 thoughts on “Another step for Craig Venter.”