The Myth of the Robber Barons, by Burton Folsom 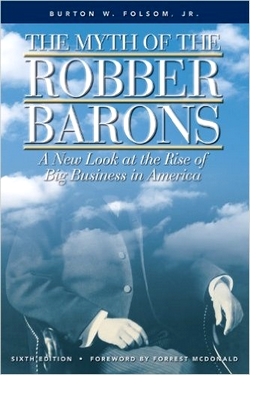 Controlling our view of the past – even our view of the present – is an obsession with the Progressive Left. Our understanding of history deeply influences our thinking and philosophy. Among other things, it shapes our view of both the morality and social-economic effects of free market capitalism versus socialism.

To that end, a group of enormously successful people from the 19th century were demonized by turn of the century Progressives and have continued to be demonized as The Robber Barons by Leftist historians in primary school and college texts ever since. More subtly, through dark Orwellian references in Leftist entertainment programs and media, they have been thoroughly maligned in the popular imagination as well. Yet few people know who these people actually were and what, for better or worse, they actually did in their lives and how their works affected our lives even today. In his book, Robert Folsom sets out to take fresh look at people we would today call entrepreneurs.

One of the main topics of this book is that there were two types of  businessmen labeled as Robber Barons, whom Folsom labels as ‘market entrepreneurs’ and ‘political entrepreneurs’. The first group, the market entrepreneurs, succeeded by using private capital, providing higher quality products and services, using better organizational, manufacturing and building techniques, often providing higher salaries, bonuses and better working conditions to their employees, and generally delivering ALL of that at lower prices. That combination, when achieved, was often unstoppable and drove their competition into bankruptcy and the arms of political protection. The second group, the political entrepreneurs, utilized state granted monopolies and taxpayer funded subsidies, engaged in payoffs of stocks and goodies to politicians, then delivered highly priced services and shoddy construction. Both were lumped together and labeled Robber Barons. Some of them, the politically connected group, were arguably robbing people. The other group succeeded on hard work and merit. For the Progressives, it’s imperative you not know the difference. Who succeeded and why, who failed and why.

We all know that Robert Fulton was the first American to successfully operate a steam powered boat (apparently of his own design) as a commercial service in New York in 1807. What you may not have known is that in 1809 the State of New York granted Fulton a monopoly on all steamboat traffic in the state for 20 years. In the thinking of the legislature, this guaranteed that Fulton had sufficient income to operate his boats, relieved him of competition, gave citizens access to travel around the harbors and along the Hudson River, and provided the politicians control over steamboat services in their state.

Enter Thomas Gibbons. Gibbons, a New Jersey steamboat operator who came along a few years later,  thought the whole arrangement completely unfair. Why should he not be allowed to even compete for passengers in New York, right across the harbor from him? Getting nowhere with the politicians, he decided he was going after that business whether the New York legislature like it or not. So in 1817 he hired a pirate, young Cornelius Vanderbilt, to run steamboats from New Jersey to New York at lower fares, always keeping one step ahead of the law. Gibbons former business partner, Aaron Ogden, took him to court over the New Jersey line, and in a case that ended up in the Supreme Court as Gibbons versus Ogden, the New York law was struck down and the federal government was given exclusive rights to regulate interstate commerce. Steamboating immediately exploded around the states and on the frontier. And with double of steamboat services every year for the first years after, technology improved from wood fired copper kettle boilers to anthracite coal fired tubular boilers. Fares dropped immediately on the New York to Albany route from $7 to $3 per person. The Fulton group could not compete and went bankrupt. The Vanderbilt managed Gibbons line built new boats with new technology, dropped fares, reduced travel times, and still made $40,000 profit each year. Vanderbilt went on to form his own company providing steamboat travel all over the northeast and eventually from the Atlantic to the Pacific, often fighting government subsidized lines and beating them on price and performance, and opening long distance travel to low income people. That just scratches the surface of his amazing life story and the enormous opportunities he opened up for people all over the young country.

Another fascinating character he tackles is John D. Rockefeller. We’ve all heard the name and may have even visited Rockefeller Center in New York, where NBC currently has its headquarters. Orwell would have smiled at the deep – almost unbelievable –  irony of the flagship of Progressive propaganda having a studio in a building complex named for, and built by, the most notorious and hated of the 19th industrialists. It’s like raising your flag over the enemy’s capital. And yet arguably, John D Rockefeller did more to improve the lives of people all across the world than any other human being in the 19th century.

Born in 1839 to a peddler father and a deeply religious Baptist mother, she was the major influence on his early life. She trained him from the beginning “to work, to save, and to give.” He tithed from his very first paycheck and gave to his church, to a mission, and to the local poor. He continued to tithe and give for his entire life. He saved money from his first job as a bookkeeper and with that went into the grain shipping business on Lake Erie in 1858. He was 19.

Back in 1855, a chemistry professor at Yale, Benjamin Silliman, had analyzed crude oil and learned he could distill a light, clean burning fuel from it, which he called kerosene. He also distilled lubricating oil, gasoline and paraffin. But it wasn’t until 1859 when Edwin Drake proved you could pump oil out the ground like you could water that crude oil went from a mineralogical curiosity to a useful commodity and Northwest Pennsylvania soon became America’s first booming oil field.

One of John’s friends from his church, Samuel Adams, was investing in oil and began talking to John about possibilities for enormous growth in that business. Intrigued, Rockefeller investigated the oil fields and the products that oil produced and in 1865 he and Samuel went into business and built an oil refinery.

When he entered the oil business waste and spillage was rampant. Wells were notoriously sloppy. At refineries where kerosene and lubricants were distilled, waste was dumped on sight or into nearby rivers and creeks. By contrast, Rockefeller’s refineries were renowned for their cleanliness. Where other refineries were distilling kerosene and dumping the rest as waste since it was more difficult to sell, Rockefeller and Adams distilled the kerosene, gasoline, naphtha, paraffin, vaseline, and tar and found buyers or uses for all of it. They were soon the largest and most successful refiners in Cleveland and in 1870 they reorganized, brought in additional partners, and formed Standard Oil.

With Rockefeller in charge, they continuously reinvested and new and better equipment, and built new refineries. They hired chemists to find uses for every part of the oil and the products included paints, varnish, a range of lubricants, and even anesthetics. “We saw the vast possibilities of the oil industry, stood at the center of it, and brought our knowledge and imagination and business experience to bear in a dozen, twenty, thirty directions.” From 1865 to 1870 the price of kerosene dropped from 58 to 26 cents per gallon. Rockefeller and Adams had made a profit in every one of those years. However, most of Cleveland’s refiners had not. There were bankruptcies and lots of hard feelings. During the 1870’s kerosene dropped to 8 cents a gallon. Standard oil captured 90% of the American market.

Rockefeller vertically integrated Standard Oil so he could better control the quality and cost of his end products. For example, he bought his own barrel making machines and timber so that his barrels didn’t leak and were cheaper to make than those he was buying from coopers. Then he developed cheaper but stronger hoops from zinc plated steel strips. His strong, non-leaking, blue painted barrels became a symbol of  high quality kerosene and lubricants all over the world.

In the 1880’s things got tough. The Pennsylvania fields were running dry and electricity was capturing large parts of the kerosene lighting market. The western oil fields had not yet been discovered and the gasoline engine had not yet arrived. In the midst of that, Rockefeller gambled millions of dollars on oil from the Lima Ohio oil fields. The oil was heavy with sulphur, stank horribly, and was virtually unusable. Unable to sell it, Rockefeller bought 40 million barrels very cheap. His chemists eventually developed a purification process and Standard Oil found itself in possession of an enormous stockpile of crude that allowed them to distill kerosene very cheaply for many years. Buyers were found for the sulphur as well.

The book is light reading and I read it in under a day. It’s written in conversational style and something like short story format. I thoroughly enjoyed it. Other people covered include James J Hill, the builder of the Great Northern Railway, a privately funded competitor to the transcontinental Union Pacific – Central Pacific Railway, the Scranton steel family and founders of Scranton Pennsylvania, Andrew Mellon the financier and Secretary of the Treasury, and others. I recommend it.

1 thought on “Book Review: The Myth of the Robber Barons”