Yes – just this week, we have launched the third of the Luna City Chronicles – there will be at least two more, and possibly beyond, as it is a fun series to write and readers seem to enjoy them immensely.
Behold the cover – 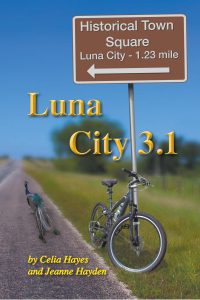 Luna City 3.1 is available on Amazon for Kindle and in print (although the cover image doesn’t show, yet) and on Barnes & Noble.

As a bonus – a short snippet of a chapter –

“I know that it’s been fifteen years as of last Sunday,” Coach Garrett mused thoughtfully, hardly taking note of the beer in front of him. “But sometimes it’s as clear to me as if it was yesterday.”
It was a perfect, autumn afternoon – a Friday afternoon in mid- September, just beginning to turn cool. The VFW had visitors’ night on Fridays, and now Richard sat outside with Joe Vaughn and Coach Garrett, at the splintery picnic table under the massive sycamore tree that shaded the back of the VFW.
“You were there in New York, weren’t you, Coach?” Joe drank deep from his own beer. “You saw the Towers go down, up close and personal. Man … it was bad enough watching on TV in real time.”

“Another life,” Dwight Garrett shrugged, but something in the look of that otherwise undistinguished, middle-aged countenance warned Richard to embrace tact and circumspection in his further comment.
“It was a splendid day for me,” Richard ventured, reminiscent for the world of just a little ago, but gone as distant now as the Austro- Hungarian empire. “I know … the irony of it all. An evening in Paris – it was mid-evening. I had just won my first cooking contest, and signed with a talent agency. Some of my old Charterhouse pals and I popped over to Paris to celebrate my excellent prospects. We were drinking in a bar in the Rue d Belleville, and wondering why they had a telly on, and tuned to some high-rise disaster movie. It didn’t seem all that big a thing, not at first. The penny didn’t drop until we saw the headlines in the newspapers the next day. In my defense, we were all enormously pissed that evening.”
“I’ll bet your hangover was epic,” Joe said, not without sympathy. “I was at Fort Lewis. First assignment to the Second Battalion … just driving into work, when it came over the radio. Airplane crashed into the World Trade Center tower. Swear to god, everyone thought it must be one of those little private airplanes, ya know – like a Piper Cub or something. The top sergeant said, ‘Oh, man, they must have gotten hella lost!’ And then someone turned on the breakroom TV, and there was this big ol’ gash in the side of the tower and the smoke just pouring out… Top said he remembered hearing about a WWII bomber hitting the Empire State Building, but that was in a fog. Two big honking silver buildings – we just couldn’t understand at first how it could happen by accident.”

“It was such a beautiful morning,” Dwight Garrett nodded. “Cool, crisp … not a cloud in the sky. I had played a concert at the Alice Tully the night before, so I slept in. Gwen … my wife didn’t wake me up when she left for work. She left a note for me … that we should meet for supper at Morton’s on Washington Street, just around the corner, when she was done with work that evening.”
“Didn’t know you were a married man, Coach,” Joe said, and Dwight Garrett sighed.
“Oh, yes – I left it late, sorry to say. Gwen and I were married for six years and three months. A dedicated career woman, and a divorcee with two sons she raised herself. We met at one of those musical soirees associated with a Mozart festival. Gwen was in finance. Did you ever notice that maths and music are deeply intertwined in some people? Anyway, we had a nice little condo in Tribeca, a stone-throw from where she worked.”
“And?” Richard prodded. He had visited New York often enough during the high-flying years of his career as a globe-trotting celebrity chef, and had only the vaguest notion of where Tribeca might be. It was not his favorite city on the American continent; that would be Vancouver, or perhaps Miami. New York was too crowded, too … vertical for his taste.

“She worked at Cantor-Fitzgerald – in the North Tower,” Dwight Garrett replied in perfectly level, dispassionate tones. Joe drew in his breath sharply, but said nothing, and Coach Garrett continued. “Even asleep, I heard the sirens – but so ordinary a sound in the city, I just went back to sleep. Until Gwen’s son Jeff called from White Plains. ‘Where’s Mom?’ he said, ‘Did she go into work, today? Turn on the TV – there’s a plane that hit the building she works in, all the top floors are on fire, and she’s not answering her cellphone.’ I told him to calm down. I’d walk over to the WTC and find her, make sure she was safe, and that everything would be all right …” He took a long draw of his own beer, calm and meditative, as if he were telling a story of another persons’ experience. “The sidewalks along Vesey Street were full of people looking up towards the towers – both of them just gushing smoke. Like water coming out of a fire hydrant. I started walking as fast as I could. I could see nothing moving on the street, but fire engines, lined up as far as I could see, once I got close. I kept trying to call Gwen. I thought sure that they would let me through the barricades once I explained. The South Tower fell before I got to the end of the block. It was … like a tidal wave of black smoke, dust, soot. A policeman yelled at us to run like hell. A bunch of us on the sidewalk ran into the nearest place – a coffee shop on Vesey, to escape it.” Coach Garrett shook his head, slowly. “Outside that window it turned as black as you could imagine. And the lights went out. You couldn’t see your hand in front of your face for about five, ten minutes. That policeman was in there, too – he had a flashlight, but it didn’t help. When we came out everything was grey, covered with thick grey dust. We were all covered in it, too. Needless to say, they wouldn’t let me come anywhere near the North Tower. There were too many people. And I think they were already afraid that the North Tower was going to fall as well.”

“Did you find your wife?” Richard ventured. Coach Garrett shook his head.
“No. Not that day, or afterward. Nothing left – everything and most everyone on the floors just above the impact site were essentially vaporized. I accepted right away that she was gone forever, nothing to be done. No good going to the morgue or hanging around as they excavated the pile afterwards. It was almost as if our marriage had been a wonderful, fleeting dream, and she had never been … except for the boys, of course. And her clothes and things in the condo. It was just so … curious, how it happened out of the clear blue in the blink of an eye, on so ordinary day.”

“Sorry, man,” Joe said, after a long moment. “I never knew about your wife, and all of that. That why you left New York and came home to Texas?”
Coach Garrett nodded. “I couldn’t stay. Not without Gwen. The pile of rubble burned for months. The whole place smelled of smoke and death. I packed a suitcase and took the express to White Plains a few days later. I signed the condo over to Jeff and his brother, rented a car and drove back to Texas. I meant to go back to Kingsville … but heard about a job teaching music here. It seemed like a good way to start fresh.”
“You do what you gotta do,” Joe agreed. “Another, Coach? My treat.”
“Sure thing, Joe,” the older man finished off his beer and looked into the distance; the blue, blue sky and the leaf canopy of the sycamores just beginning to turn gold and brown. “There’s one thing I do regret about Gwen. I wish that I hadn’t slept in – that I had fixed her breakfast, kissed her, said that I hoped she would have a good day, and that I loved her. I never for a single moment thought that she would suddenly just not be there. Love shouldn’t end that way, on the flip of a coin.”
“Nope,” Joe agreed, and to Richard, it looked as if Joe had suddenly made up his mind about something. “You want another, Rich?”
“Only if you’re buying.” Richard replied. “Cheap limey bastard,” Joe grumbled.

5 thoughts on “Friday Diversion: The Launch of Luna City 3.1”